The TDA2616 circuit provides dual power amplifier functionality. This integrated circuit was explicitly developed for stereo broadcasting, including stereo radio and stereo television. This integrated circuit features a hi-fi audio power amplifier two times 12 watts and has a mute function. Both channel speakers benefit from the tda2616 ic’s excellent sense of balance. In the following paragraphs, we will get further knowledge concerning this device; but, before doing so, what exactly is an audio amplifier IC?

Audio amplifier in the context of audio applications, ics, also known as integrated circuits, are devices employed within electrical circuits. Audio amplifiers are devices that, in addition to increasing and controlling the power of the signals, amplify them. They are utilized to improve the sound as well as the quality of the audio signal. Amplifiers are classified according to their qualities and performance using letter symbols, such as class-a, class-b, class-c, class-d, or class-ab.

Ic audio amplifiers are beneficial due to their ability to reduce amplification devices’ size drastically. This makes it feasible to construct complex amplification within a small container, which is a significant advantage. On the other hand, they are not stand-alone devices like power amplifiers. Standard semiconductor packages, including pdip, htssop, tqfn msop, and soic, are used to construct audio amplifiers. Both through-hole and surface mounting options are available for these products. 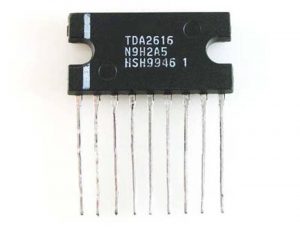 The TDA2616 is a stereo power amplifier integrated circuit available in a plastic power package with 9 leads and is referred to as a single-in-line (sil9) configuration (sot131). This integrated circuit was explicitly developed for amplifier circuits fed by a mains supply, such as those found in stereo radios, tape recorders, and televisions.

In compliance with the standards iec 268 and din 45500, the integrated circuit (ic) in question possesses an adequate gain balance throughout both channels and the high-fidelity range. In addition, the ic tda 2616 incorporates a specialized anti-noise circuit that works both when the device is turned on and when it is turned off. This circuit is responsible for suppressing noise signals at the inputs. This eliminates the clicks typically occurring while turning the power on and off.

The Input Mute Circuit Is A Distinctive Characteristic Of This Device. If the supply voltage drops below 6 V, this circuit cuts power to the amplifier’s non-inverting inputs while keeping the amplifier’s dc gain unchanged. Because of this, the amplifier can keep on working normally. Unwanted input signals are filtered out by the circuit before, during, and after power cycles.

The TDA2616 is a high-fidelity stereo amplifier explicitly built for applications fed from the mains, such as stereo radio and tv. The circuit is optimized for power supplies with a symmetrical configuration, but it also works very well with power supply systems with an asymmetrical design.

A 16 v symmetrical power supply can deliver 2 12 w with 0.5% thd into an 8 load.  As a result of the gain being internally set at 30 db, there is a perfect gain balance between the two amplifiers and a minimal gain spread (0.2 db).

One unique feature of this gadget is the input mute circuit. This design disables the amplifier’s non-inverting inputs when the supply voltage drops below 6 v while keeping the dc working gain setting same. Both the circuit’s on and off phases suppress unwanted input signals.

Pin 2 is another way to engage the mute circuit if you choose. When there is a current of 300 microamperes present at pin 2, the circuit is in the off condition. The component comes equipped with not one but two separate heat protection circuits. The temperature of the power transistors can be measured by one circuit, while the average temperature of the crystal can be measured using the other circuit.

These control circuits become unstable at temperatures higher than +150 degrees celsius; hence, a crystal with an operating temperature of no more than +150 degrees celsius can be employed without introducing further distortion. Using the derating value of 2.5 k/w, the following calculation can be made for the heatsink: the maximum power dissipation measured was 14.6 w when the resistance was set to 8 ohms, and the voltage was set to -16 volts

The TDA2616 audio amplifier circuit is a radio power amplifier IC typically available in a 9-lead single-in-line (sil9) the plastic power package. This package is used to store the amplifier (sot131). This integrated circuit was expressly developed for use in amplifier circuits fed by mains power, such as those found in stereo radios, stereo tape players, and stereo televisions.

The TDA2616 ic’s gain on both channels meets IEC 268 and din 45500 standards. The TDA2616 features a unique built-in circuit that suppresses noise signals at the inputs during the switch-on and switch-off processes. This eliminates the possibility of clicking sounds occurring while the circuit is in use.

Are you planning to purchase TDA2616 in bulk, we at ICRFQ got your back. Contact us today; we are the best electronic components suppliers in China.