Everything You Should Know About Toggle Switches 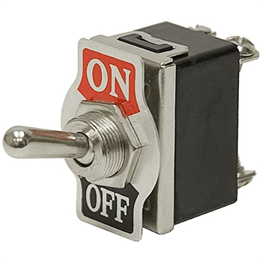 Toggle switches are the go-to method for controlling light fixtures, appliances, and other household fixtures. They are a common hardware found in almost all modern homes as well as commercial and industrial buildings. They’re the easiest way to get a circuit up and running, and they come in a variety of different styles to suit your home’s design.

If you’ve ever had to connect a light fixture, toggle switches are a handy tool and can eliminate a lot of hassle in the process. If you are ready to learn everything you need to know about toggle switches and how to use them, keep reading.

What is a toggle switch?

Toggle switches are used to turn things on and off, as well as to control power flow in circuits.

They’re also used for a variety of other functions, including controlling the intensity of an electrical current, switching between different circuits, or even to power appliances.

Where do toggle switches come in?

Because they are so easy to use and inexpensive to produce, toggle switches are found in almost every modern home. They’re often used in homes and buildings to control lights, televisions, and other home entertainment systems. They can even be found on power tools or any other device that uses electricity.

Toggle switches also come in handy when you need to control a circuit manually or when you need to switch between two circuits at once. You can even use them for complex mechanisms that require different levels of power at once.

Toggle switches are small devices that can be difficult to differentiate from one another because they come in so many different shapes and sizes. However, there are some design elements that you’ll find across all toggle switches that will help you identify them.

Components of a toggle switch 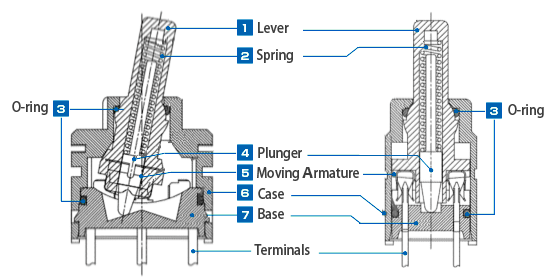 A typical toggle switch comprises various functional components which include;

-Lever: This is the moving part of the switch. When you press on the lever, it completes a circuit by connecting two different points in an electrical system.

-Contacts: The contacts are a pair of metal strips that are housed inside a plastic casing. The contact strips are what complete a circuit when they come into contact with each other.

-Toggle: This is the part of the switch that you use to turn the power on and off. It’s usually made out of plastic or metal and can be moved up or down to control power flow through your electrical system.

-Stem: The stem or shaft usually connects the toggle to the contacts and the lever. It allows you to move up or down while controlling the power flow in your electrical system

-Insulation: In most cases, there will be some kind of insulation around your toggle switch so that you don’t get electrocuted when you touch any part of it while it’s turned on.

-Casing: The casing protects all of the other components from damage and keeps them connected together.

-Armature: The armature is the part of the switch that moves up and down when you press on the lever. It’s connected to the toggle and contacts.

-Mounting screws: The mounting screws are used to hold everything together, so make sure you don’t lose them!

-O-ring: The o-ring is a small rubber ring that keeps your switch from leaking when it’s turned on.

-Spring: The spring is the metal piece that moves up and down. It connects the armature to the toggle and contacts.

How do toggle switches work?

Toggle switches have a simple working mechanism. They are designed to have a handle that you can switch from one side to the other. When you do so, a small metal piece called a lever will move, breaking the connection between two wires.

When you flip the toggle switch, the lever will move and break the connection between the two wires. It’s a very simple mechanism that can be used to control a circuit manually or to make a change in an automated system.

Toggle switches are also very versatile because they can be used to control two circuits at once.

How do I use toggle switches?

You can use a toggle switch to control a circuit manually or to make an automated change in a circuit.

You can also use a toggle switch to control two circuits simultaneously. To do this, connect one of the wires from each of the circuits to each side of the toggle switch. The other wire from each circuit should be connected together in some way and then connected to one terminal on the battery or power supply that you want to power your circuit with.

The other terminal on your battery or power source goes into one side of your toggle switch. When you flip your toggle switch, it will break the connection between both wires at once and prevent electricity from flowing through both sides of your circuit at once. 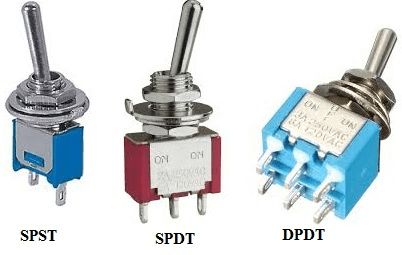 There are different types of toggle switches in the market. Though all have the same working mechanism, they come in different configurations, which eventually dictate their functioning.

The main types of toggle switches include;

This is the most common and simple switch. It is a single-pole switch, which means that there is only one terminal on the switch. The two wires are connected at one end of the toggle switch and connected to two terminals on your power source. When you flip your switch, it will break the connection between both wires at once and prevent electricity from flowing through both sides of your circuit at once.

You should also know that toggle switches come in various configurations. Let’s look at some of them.

These are also known as changeover switches. The switch is connected in series with the load. When the switch is on, the current flows through the load. And when it’s off, current doesn’t flow.

These are also known as common-mode switches. The switch is connected in series with the load and has two terminals. These types of toggle switches are commonly used for powering circuits for which there are no grounds (such as telephone lines).

These are also known as common-collector switches or collector-emitter isolators (CEIs). In this type of toggle switch, both terminals of the switch are connected in series with the load. The switch has two terminals, one of which is connected to the collector of the source and another of which is grounded.

These are also known as momentary-on-contact switches or just MOC switches. This type of toggle switch has a single terminal that is connected to the collector of the source.

Other types of toggle switches

Here are other types of toggle switches that you are likely to find in the market.

-Flat toggle switch: A flat toggle switch is characterized by flat metal plates. The plates are separated by a spring. When the switch is closed, current will flow through the metallic plates and when it is opened, both plates will be shorted to the ground.

How to choose a toggle switch

When buying toggle switches, try to pay attention to the following features and specifications.

-Voltage rating: The voltage rating of a toggle switch indicates the maximum voltage that the switch can tolerate without breaking down.

-Insulation rating: The insulation rating of a toggle switch indicates the minimum voltage drop under normal operating conditions and is specified in millivolts (mV).

-Resistance: The resistance value for each terminal is measured in ohms (Ω).

-Contact pressure: This parameter specifies the force required to close a normally open contact. It is measured in pounds per square inch (psi) or kilograms per centimeter squared (kg/cm²).

-Terminal types: Toggle switches have different types of terminals. They include screw terminals, feed-through terminals, blade terminals, and PC terminals among others.

Where to buy toggle switches?

This is why ICRFQ is there to help you, such manufacturers. As a sourcing agent, we link buyers of electronic components from all corners of the world to reliable manufacturers and suppliers. Contact us and let’s help you.