Eight common-emitter Darlington transistors with built-in inductive load suppression diodes are found in the ULN2804A. Each Darlington has a 600 mA peak load current rating (500 mA continuous rating) and can resist at least 50 V in the OFF state. It is possible to parallelize outputs to enhance current capacity.

It has the practical input-opposite-output pinout, which makes the board layout simpler, and is available in an 18-lead plastic DIP with copper leads. But first, a brief introduction to Darlington transistors before we move on.

What is a Darlington Transistor?

This transistor type is useful in various applications where switching or amplifying signals is essential. It is possible to build the transistor pair used in the Darlington transistor using two BJTs coupled to one another in separate circuits. As a transistor may act as a switch and an amplifier, a BJT can serve as an on/off switch.

Transistor with a Darlington diode

This particular transistor is known as a “Darlington Pair” because its compound structure is created from two BJTs. Because it only possesses a single emitter, collector, and base, this transistor operates similarly to a single transistor unit. In 1953, Sidney Darlington came up with the idea for what would later be known as the Darlington transistor. 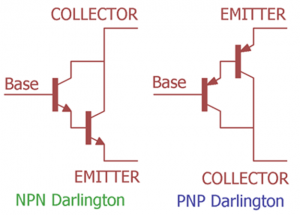 Compared to a standard transistor, the Darlington transistor, also known as a Darlington pair, possesses several advantageous qualities. The following is a list that provides a summary of these points:

The following is a list that provides a concise summary of the drawbacks associated with using a Darlington transistor, often known as a Darlington pair:

The ULN2804A from STMicroelectronics is a DIP-packaged, eight-Darlington through-hole array. With common emitters and built-in suppression diodes, the array’s eight Darlington transistors are able to handle inductive loads with ease.  Each Darlington can withstand a minimum of 50 volts when it is in the OFF state and has a maximum load current rating of 600 milliamperes (500 milliamperes continuously).

Additionally, a 10.5 kilohm input resistor for 6 to 15 volts CMOS is included to make the connection to standard logic families easier.

There are eight common-emitter Darlington transistors in it.

As a leading developer and provider of semiconductor solutions for various microelectronics applications, STMicroelectronics is a global independent semiconductor corporation. The Company is at the cutting edge of System-on-Chip (SoC) technology. Its solutions are essential in supporting today’s convergence trends because of an unmatched combination of silicon and system knowledge, Intellectual Property (IP) portfolio,  manufacturing strength, and strategic partners.

We hope this article will help you in your projects. If you have any questions about this article or any other article on our website, feel free to post them in the comment sections below, and we will do our best to answer them then.

We at ICRFQ are a global supplier of every electronic component you may need. Get in touch with us today, and we will provide you with the lowest prices on the highest quality.