Volts vs Watts: What’s The Difference? 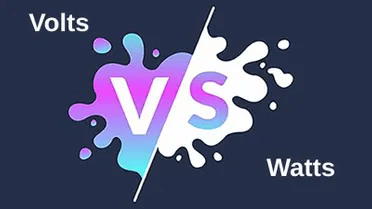 Before you can keep track of your energy usage and plan for the future, you need to understand how electricity is measured. The most basic way to think about energy is as a measure of power. The more energy you have, the more powerful your electrical appliances will be. To power your home and all of its electronics, you need to balance the amount of energy you consume against the amount of electricity supplied by your utilities. The first thing to know is that the two terms – volts and watts – represent two different concepts, and the two are not interchangeable.

Volts vs Watts: What’s The Difference?

Voltage is a measurement of electrical pressure. It’s the force behind the flow of electrons through a circuit. The higher the voltage, the faster and more forcefully electricity will flow through a circuit. In other words, voltage is like water pressure in a pipe. The higher the water pressure, the faster and more forcefully water will travel through it.

When electricity travels through wires, it does so at very high speeds; about 186000 miles per second (300 million meters per second). But that speed isn’t constant; it fluctuates based on how much electricity is being used. That’s where the voltage comes in: to measure how much energy is being used at any given instant. The higher the voltage, the more energy you’re using at once.

Voltage is measured in volts, named after Alessandro Volta, an Italian physicist who invented what we call the “voltaic pile” in 1799. The voltaic pile was a stack of alternating disks of zinc and copper that produced a steady flow of electrons when an electric current was applied to it. In honor of his invention, one volt is defined as the potential difference (the difference in electrical charge between two points) that produces one ampere (1A) of current when passed through a resistance of one ohm (1Ω).

Wattage is measured in watts, named after James Watt, the Scottish inventor and mechanical engineer who is widely credited with developing the modern steam engine.

What is a kilowatt-hour?

A kilowatt-hour (kWh) is a unit of measurement used to describe the amount of energy consumed by an appliance over time. An electric company bills you for how many kWh you’ve used over any given period of time, such as a month or year. A kWh is equal to 1,000 watts (1kW) of power consumption for one hour: 1kWh = 1 watt × 1 hour = 1 watt-hour. 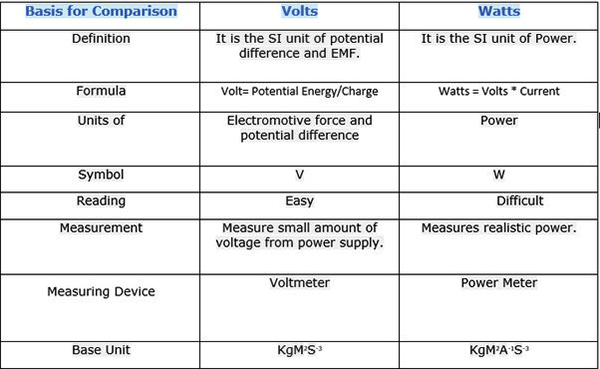 Device of measurements: Volts vs Watts

Which one gives more detailed figures between watts vs voltage?

There is no doubt that watts tend to give more details about a circuit. A wattmeter can measure the voltage and current of a circuit.

A voltmeter can only measure the voltage in a circuit. It cannot measure other details of a circuit in a snap.

It is also very difficult to calibrate a voltmeter to give an accurate reading for power or watts when it is connected to an active circuit with varying loads on it.

Difficulty in measurement: Watts vs Volts

The two units also vary in the levels of difficulty when it comes to reading their measurements. A voltmeter is very easy to calibrate and measure, especially with a multimeter.

A wattmeter is very difficult to calibrate and measure. It is only possible to measure the power of a circuit with an oscilloscope or power meter.

The readings given by a wattmeter are measured in terms of watts, but it is not possible to calculate voltage or current from these readings.

So, what do these base units mean and what is their significance in an electric circuit?

The base unit for watts is Kilogram-meters squared per second. This is the quantity that the voltage of a circuit changes by when a current of one ampere flows through it.

The base units for volts are Kilogram-meters squared per ampere. This is the quantity that the voltage of a circuit changes by when a current of one ampere flows through it.

This means that when a current of one ampere passes through a circuit, the voltage will change by one volt.

Which one should you trust between watts and volts? You should definitely trust watts. Its values are more realistic than volts. It is more accurate because voltages are expressed in KV (Kilovolt) rather than V.

When you look at a voltmeter, the meter moves from 0 to 10 volts and then back to 0.

This makes it impossible to know how many volts the meter is indicating. The wattmeter gives you a reading in real-time so that you can estimate the magnitude of the current flowing through a circuit.

The wattage of an electrical circuit can be calculated by multiplying the voltage by the power factor (PF). Power factor is a measure of how efficiently electricity flows through a circuit. A circuit with a high power factor will draw less voltage than one with a low power factor.

Steps of finding the wattage of a device 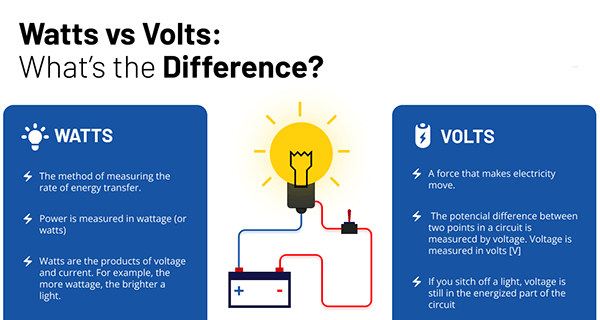 So, you want to buy a device and one of the parameters that you should know is its wattage. There are three easy ways of calculating the wattage of any device that you are about to purchase.

Step 1: Find out the watts at the power source

Your device will be drawing power from a source, right? So, you should start by finding out the exact power at the source.

Step 2: Find the voltage at the device

The power at the source is equal to the voltage across the device multiplied by the power factor.

Step 3: Find out how much current flows through it

You can now use Ohm’s Law to find out the power that the resistor needs to dissipate. This is done by finding the voltage across it and using a formula involving resistance, current, and power.

For the voltage, you can simply use a voltmeter to find the most accurate volts of a device or in a circuit.

I hope you now understand the difference between volts and watts. I have tried to explain the difference by using real-life examples and different calculations. If you have any questions, don’t hesitate to consult experts in the matters of electricity for more accurate answers.

And if you choose to use devices for measurements, ensure that they are in perfect working condition to deliver accurate results. And in case you would like to buy quality electrical component devices in China, ICRFQ should be your next stop. As a sourcing agent, we will connect you to the manufacturers and suppliers of electrical components in China.