What Is a Plug on Neutral Breaker？ 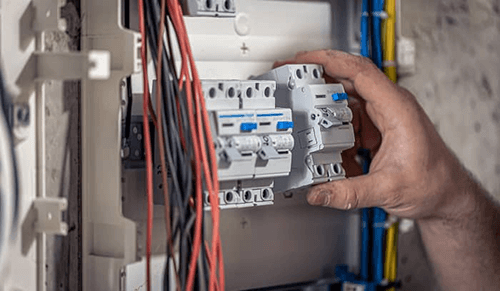 You can avoid a pigtail connection by using a plug-on-neutral breaker, which you can connect straight to your neutral bar. Although nearly identical to regular AFCI and GFCI breakers, it is incompatible with most standard breaker panels.

Despite this, a plug-on-neutral breaker has several advantages over standard breakers. Continue reading to learn more about this device.

What Is a Plug on Neutral Circuit Breaker?

You don’t need to be concerned about how to wire a plug on a neutral breaker if you don’t know how to do so because it’s pretty simple. Attach the hot wire to the breaker and clip the plug-on-neutral breaker onto the neutral bar; you will be ready to go.

However, to use a circuit breaker that plugs into the neutral wire, you will need a specifically constructed panel to do so. This is because these breakers include a clip specifically designed to connect to the neutral bar in a straightforward fashion. Therefore, the plug-on-neutral circuit breaker will not work with your breaker panel if it is not constructed with a neutral bar that enables this.

Compared to conventional designs, the fact that a plug-on-neutral circuit breaker and panel save you time is the most significant benefit. It uses a clip that can be mounted directly onto the neutral bar instead of requiring a pigtail connection to attach your breaker to the neutral bar.

In light of this information, installing a plug-on-neutral breaker may be up to 10 times quicker than installing a conventional AFCI or GFCI breaker.

The requirement to have a pigtail wire connected to the neutral bar can be eliminated if the neutral load center has a plug. This gives you a better load center without mess or wire tangles, even if you utilize many AFCI or GFCI breakers.

You will have an easier time handling the connections due to this reduction in the number of wires, particularly given that you will only need to deal with the hot wires that connect to each breaker. Circuit identification is additionally simplified as a result of this change.

You can easier reach your breaker panel with a plug-on-neutral breaker because it takes up less room. The chance of a loose connection causing your AFCI or GFCI  breaker to fail is also decreased because you no longer need the neutral pigtail connection screwed to the neutral bar manually.

What Is an AFCI Breaker and How Does It Work?

Circuit breakers called AFCIs are necessary for particular circuits around the house. They provide an additional defense against arcing circumstances that might cause fires at the electrical panel. AFCI breakers constantly search for any potentially dangerous arc and work to lessen the effect on the electrical system rather than just looking for overloads and short circuits, which would otherwise cause the breaker to trip.

How Does an AFCI Breaker Work?

AFCI breakers keep an eye on all varieties of arc faults. Currents that flow down unintended paths are referred to as arc faults. They frequently escape the human eye’s detection.   The AFCI breaker’s monitoring system regularly monitors for any potentially hazardous arcing. If the insulation around the wiring deteriorates and there are suddenly more channels for electricity to escape through, arc failures may occur. Any of these events will cause an AFCI breaker to trip the circuit breaker, cutting off the flow of electricity to that location.

What Distinctions Do AFCI and GFCI Breakers Have?

They are focused on stopping arc fault-related fires and AFCI breakers. As a result, they are excellent at preventing fires but do not necessarily concentrate on avoiding electrocution.

To prevent electrical current from entering and moving through your body, ground fault circuit interrupters (GFCIs) are used. Fortunately, you don’t have to decide between the two because you may install a single device that includes an AFCI and GFCI breaker or have them coupled.

Most local governments will demand AFCIs for newly constructed residences or when replacing a circuit breaker panel. There isn’t a natural law or code to which all 50 states must adhere, but most have passed some regulation or legislation that makes AFCIs the norm. It’s crucial to hire a qualified local electrician to install AFCI breakers in your home, even if your neighborhood does not require them. This will make your house safer.

If you already have a breaker panel with plug-on-neutral breakers installed in your home, installing more breakers is a piece of cake. The removal of the pigtail connection can be accomplished straightforwardly and efficiently thanks to the plug-on-neutral innovation.

Now that you know “what is a plug-on neutral breaker?” and the type of panel it requires, you can check if you have compatible equipment and reduce the time it takes to install a new circuit breaker.

So, does the electrical panel in your house feature plug-on-neutral breakers? Have you understood better the distinctions between a pigtail breaker and a plug-on neutral? Leave a comment below with your views and opinions.

For more details on neutral breakers or purchasing them in bulk, contact us at ICRFQ. We manufacturer the best electrical components in China.