What Is a Stab-Lok Circuit Breaker? 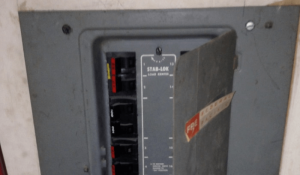 When it comes to electrical safety, there are many different considerations and regulations that must be followed. One of the most important is the use of circuit breakers in home electrical systems. A circuit breaker is an essential device that helps protect people from the risk of electric shocks or fire.

However, not all circuit breakers are created equal. Some are more effective than others at stopping current from flowing through a wire and thus limiting any potential danger. In order to understand which type you have in your home or business and how best to proceed with maintenance, it’s important to understand all about one of the most famous names when it comes to the circuit breakers-Stab-Lok circuit breaker.

Read on for everything you need to know about the Stab-Lok circuit breakers and the safety issues associated with them.

What is a Stab-Lok Breaker?

Stab-Lok is a brand name for the circuit breakers that were manufactured by Federal Pacific Electric (FPE). They were actively in production between the periods of 1950 to 1980. Reliance Electric then bought the Stab-Lok brand in 1982.

Stab-Lok breakers can be used on single pole, 3-way, 4-way, and 5-way circuits. The device is composed of a thermal-magnetic trip mechanism that is set up to trip the breaker when it senses an overcurrent condition in the circuit.

What Are the Safety Issues That Are Associated With Stab-Lok Circuit Breakers?

The most important thing to remember about Stab-Lok circuit breakers is that they are prone to failure at much lower levels than other types of circuit breakers. This means they may not trip when they should and thus fail to protect people from risks associated with electric shock and fire. This issue has been well documented by UL (Underwriters Laboratories) who is one of the most respected safety testing organizations in the world. They have conducted tests on Stab-Lok breakers which have shown them to be much more likely to fail than other similar types of devices. In fact, UL has issued a safety bulletin for all Stab-Lok devices warning users about these issues and recommending that they replace any defective units immediately if found in their homes or businesses.

As a result, anyone who has a home or business with Stab-Lok devices should take steps to replace them with safer devices.

In one of the tests, it was concluded that Stab-Lok breakers won’t trip in case of an overcurrent in the circuit. In fact, the circuit breaker itself may end up becoming the source of fire in case of an electric fault.

Why is this the case?

The make and construction of the Stab-Lok breakers were blamed for their inefficiency. Just like other circuit breakers, Stab-Lok CB is made of metals. And when an electric current passes through metal, it will generate heat and cause the metal to expand.

For example, the lock feature on the Stab-Lok breaker is made of copper while its panel bars are made of aluminum. The difference in the expansion rate may cause the connection to losen in case of an overcurrent.

The Government response to the Stab-Lok breaker safety issue

As we have already stated, Reliance Electric bought Federal Pacific Electric in 1980. Immediately after the sale, Reliance Electric reported to the U,S Consumer Production Safety Commision (CPSC) that Stab-Lok circuit breakers were unsafe.

This was the first time that the Stab-Lok breakers were considered to be unsafe.

The CPSC then began its investigation of the Stab-Lok breakers as well as other similar circuit breakers that were in use. And it was concluded that there was a possibility of electric shock and fire in case of an overcurrent.

The CPSC then issued a recall order for all Federal Pacific Electric Stab-Lok breakers in 1984. This compelled Reliance Electric to recall all the circuit breakers and repair them before they were resold.

However, some people still felt that there was no need to worry about this issue because the Stab-Lok breaker had been certified by Underwriter’s Laboratories Inc (UL). The UL is an independent agency that tests electrical products before certifying them for use by consumers. During the investigation, it was found out that even though UL had certified Federal Pacific Electric’s products, it did not test them for electric shock and fire hazards such as overheating and short-circuiting. This resulted in many people thinking that there was nothing wrong with Federal Pacific Electric’s products even after the recall order from CPSC .

Meanwhile, Reliance Electric tried to save itself from this crisis by launching a campaign aimed at educating consumers about how to safely use their Stab-Lok circuit breakers. This campaign cost Reliance $20 million but it failed to save the company.

Although the Federal Pacific Electric Stab-Lok Circuit Breakers are no longer used in homes, many houses still have them installed. If you want to be safe, you should have these circuit breakers checked by an electrician and replaced with a different brand if necessary.

We have concluded that Stab-Lok circuit breakers are unsafe. What about the panels? Is it safe to use them?

These panels were not declared unsafe. However, it was discovered that their safety record is not to the optimum level. While the panel itself may not cause fire, it can be a major contributing factor to a fire incidence.

In some cases, the panel has been replaced with a safer one. But there are still many houses with the original Stab-Lok panels. In fact, there are an estimated 20 million households in the US that have Stab-Lok panels in their homes.

How dangerous is it to keep using Stab-Lok panels?

How to identify Stab-Lok Breakers?

If you are not sure whether your home has a Stab-Lok panel or circuit breakers, here is how to check:

First, turn off the main power switch for your house. Next, remove the cover of the panel and look for a label that says “Federal Pacific” or “FPE”. If you find such a label, call an electrician and have him replace it with another type of circuit breaker.

This is quite a technical method as it entails examining and analyzing key features of the circuit breaker as well as a bus bar. The design simply refers to the shape of the snap holes that will be connected to the circuit breaker. You will have to open up the breaker box in order to do the analysis. If you are not comfortable with deep matters regarding electricity, it will be advisable to let a professional electrician do for you.

Turn off the main circuit and open the breaker box. Take a close look at the bus designs. First, check the shape of the snap holes and look for the shapes of the snap holes on the end of each conductor. Then, compare it with another breaker box or breaker. If you find that they are not similar, you should have your circuit breaker checked by an electrician.

What brand replaces a Stab-Lok breaker?