What Is an Arc Fault Circuit Breaker? Best Answer

Circuit breakers are essential household electrical devices. They control how much energy gets to the electronics in our homes. They provide safety by preventing electrical risks and accidents in our buildings.

A device used to identify the existence of loose connections in a home’s wiring is called an arc-fault circuit interrupter. This particular breaker can distinguish between a safe electrical arc and a dangerous one.

Why Conventional Circuit Breakers Are Inadequate

A conventional circuit breaker won’t notice the leak because little arcs differ from massive amounts of electrical energy rapidly transferring to earth (as with a short). Arc faults can be likened to sparks or small electrical energy bursts that produce heat but little more. Of course, they can start a fire quickly by consuming adjacent wood and plastic.

Arc fault detection is impossible with conventional circuit breakers due to their architecture. They only trip in the event of a short circuit or when a large amount of energy suddenly flows to the earth. In addition, they do not protect electrical cords that are connected or extension cords that are hooked into wall outlets.

Arc fault breakers must distinguish between nominal and dangerous arcing because electrical arcs usually are created by household appliances such as motorized vacuum cleaners and furnace motors. Another frequent arcing incident is when a light device is switched off because this allows the electrical contacts to become loose, which then results in an arc.

These are only a few situations frequently resulting in arcing that arc fault breakers may detect.

If there is abnormal arcing, the arc fault protection breaker instantly cuts off the affected circuit. In turn, the mentioned breaker stops the start of a fire.

What Is An Arc?

The electric current that travels over an air gap from a grounded component to an energized part creates an arc, a blazing plasma discharge. A huge, powerful arc, such as that produced by a lightning strike, travels over an atmospheric chasm from an electrically charged cloud to the earth or another cloud. Similar to how lightning can start fires, arcs created by home wiring have the power to generate intense heat that can set off nearby fires and destroy nearby structures.

In 2005, electrical fires destroyed almost 20,900 dwellings, claimed the lives of 500 people, and caused $862 million in property damage, according to National Fire Protection Agency data. Although many of these fires are caused by overloads and short-circuits, most are caused by arcs, which conventional (non-AFCI) circuit breakers cannot detect. 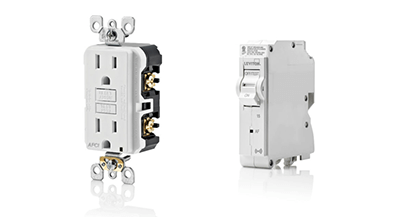 There are significant distinctions between arc fault breakers and ground fault breakers, despite the fact that both circuit breakers are essential components of residential electrical systems.

Ground Fault Circuit Interrupters, sometimes known as GFCIs, cannot recognize an electrical arc. Instead, they are positioned in bathrooms and laundry rooms to safeguard against the flow of stray current.

Monitoring the current flow to and from an electrical device is the primary function of ground fault circuit interrupters or GFCIs. These breakers immediately open the circuit when they identify something out of the ordinary, stopping the flow of potentially dangerous fault current.

On the other hand, the criterion for tripping an arc fault breaker is identifying abnormal arc electricity within the connection, such as series or parallel arcing. This can be accomplished by using either a parallel or a series arc.

However, the existence of both breakers in your home’s electrical system is advantageous for developing electrical safety.

Can I still have AFCIs installed in my home even if neither my state nor my municipality mandates their use?

Unquestionably, do you merely lock the door leading into the house’s front hall? It is reasonable to request 15 and 20A AFCI protection branch circuits for your house, not just the ones in the bedroom, to safeguard the entire residence against the threat posed by electrical arc ignition hazard. This is analogous to the practice of installing locks on all of the home’s exterior doors and windows to enhance safety.

AFCIs can be purchased through electrical distributors, as well as in a large number of home centers and hardware stores around the country. The only significant requirement in terms of the circuit’s physical configuration is that the AFCI circuit breaker must be directly linked to both the hot & neutral wires on the circuit that needs to be protected.

Why is it crucial to install an AFCI breaker in your house?

According to the Consumer Product Safety Commission and other well-known organizations, AFCIs were created to solve an electrical issue known to cause house fires. Compared to a regular circuit breaker, an AFCI breaker offers a higher level of protection since it can identify and eliminate dangerous arcing conditions before they become a fire threat.

Are there any wiring or installation instructions?

An AFCI circuit only needs to be installed and wired correctly; no additional specific criteria apply. In general, using an AFCI breaker is as straightforward as adhering to the installation guidelines provided by the manufacturer. However, there are a few circuits that require particular considerations.

Lastly you can contact us at ICRFQ, we manufacture the best electrical components in China.