What is an Inverting Op-Amp

What is an Inverting Op-Amp

A DC-coupled high-gain electronic voltage amplifier having a differential input and, usually, a single-ended output is known as an operational amplifier (op-amp or op-amp). In this setup, an op-amp produces an output potential 100,000 times greater than the difference in potential between its input terminals (relative to circuit ground). Operational amplifiers arose from analog computers, where they were utilized to conduct mathematical operations in linear, nonlinear, and frequency-dependent circuits.

Because of its versatility, the op-amp is a popular building component in analog circuits. Negative feedback allows the gain, input, and output impedance, bandwidth, and other parameters of an op-amp circuit to be dictated by external components rather than temperature coefficients or technical tolerance in the op-amp itself.

An inverting op-circuit amp’s diagram is given below. The negative terminal is connected via feedback to create a closed-loop function in this circuit. When working with op-amps, we must remember two important rules: there is no current flow in the input terminal, and V1 is always equal to V2. 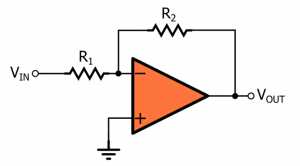 This is since the positive input terminal is grounded at OV. The op-amp is connected using feedback to generate a closed-loop operation in the above arrangement. While working with operational amplifiers, there are two crucial guidelines: “No current flows into the input terminal” and “V1 always equals V2.”

However, because the input junction and feedback signal ‘X’ are at equal voltage, the two rules mentioned above are broken in practical op-amp circuits. The junction is a “Virtual Earth” when the positive input voltage is zero volts. As a result of this virtual earth, the input resistance of the op-amp is equal to the input resistor value (Rin).

The ratio of the two external resistors can be used to control the closed-loop gain of the inverting op-amp. The non-inverting terminal of the op-amp is connected to the ground after the input signal is applied through the ‘Ri’ resistor to the inverting terminal of the op-amp. A feedback system is also included to keep the circuit stable. A feedback resistor ‘Rf’ can now be used to adjust the output.

The input and output waveforms of inverting op-amps are given below. Assuming the amplifier’s gain and the sine wave as an input signal, the waveforms below can be produced. The following waveforms clearly show that the output is twice as large as the input (Vout = Av * Vin) and that the phase is the opposite of the input. 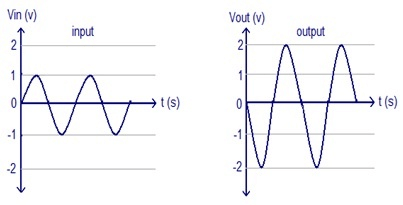 The voltage gain provided by the circuit as mentioned above is calculated as follows:

However, we know that a perfect operational amplifier has limitless input impedance because no current flows into its input terminals. I1 = I2 = As a result, Ii is the same as If. So,

We know that the voltage at two op-amp inputs is always equivalent to a perfect operational amplifier.

We can deduce the following from the equations mentioned above:

Vout can be obtained by changing this equation.

An inverting op-voltage amp’s gain is equal to

These amplifiers have good linear qualities, similar to DC amplifiers, making them perfect. Furthermore, they are commonly used in Transresistance and Transimpedance Amplifiers to convert the i/p current to the o/p voltage.

The output voltage (Vout) equation Vout = Vin x Gain illustrates that the op-amp circuit is linear for a fixed gain of an amplifier. As a result, this property comes in handy when converting a low sensor output to a greater voltage.

The voltage characteristics of an inverting amplifier are depicted in the graph below. It’s worth noting that the output voltage, Vout, is negative when the input signal, Vin, is positive. Furthermore, the output voltage will fluctuate linearly after the applied input voltage.

Once the amplitude of the input signal exceeds both of the supplied power supply to the op-amp, this characteristic will saturate; otherwise, the output will become constant.

Some of the advantages of inverting amplifiers are listed below.

The following are some of the downsides of inverting amplifiers.

Use in electronics system design

Whether the amplifiers are integrated or discrete circuits, using op-amps as circuit blocks is considerably easier and clearer than identifying all of their circuit elements (transistors, resistors, and so on). Opto amplifiers can be employed as ideal differential gain blocks in the first approximation. After that, limitations can be set on the allowed range of parameters for each op-amp.

All electronic circuits are designed along the same lines. A specification specifies what the circuit must accomplish and the permissible limits. For example, the gain might have to be 100 times with a 5% tolerance but a drift of less than 1% across a certain temperature range; the input impedance might have to be one megohm; and so forth.

A basic circuit is created frequently with circuit modeling (on a computer). The design parameters are then met with commercially available op-amps and other components that meet the design specifications within the specified tolerances at a reasonable cost. If not all criteria are met, the specification may need to be changed.

After that, a prototype is produced and tested, with adjustments to fulfill or improve the specification, change functionality, or reduce cost.

Applications without using any feedback

The op-amp is being utilized as a voltage comparator, in other words. Note that if speed is necessary or a broad range of input voltages is available, a device built primarily as a comparator may be preferable because such devices may quickly recover from full-on or full-off (“saturated”) states.

A zero voltage level detector or (Ei = 0) can turn the output of a function generator’s sine wave into a variable-frequency square wave, for example. The zero-crossing detector’s output will be square if Ei is a sine wave, triangle wave, or any symmetrical wave around zero. Zero-crossing detection could also help start TRIACs at the right time to decrease mains interference and current spikes.

Positive feedback, which returns a portion of the output signal to the non-inverting input, is another common arrangement of op-amps. The Schmitt trigger, a comparator with hysteresis, is one of its most common applications. Triangle-wave oscillators and active filters are two examples of circuits that use positive and negative feedback around the same amplifier.

The open-loop level detectors discussed above will have a delayed response due to their broad slew range and lack of positive feedback. External overall positive feedback can be used, but it significantly impacts the accuracy of the zero-crossing detection point (unlike internal positive feedback that can be used in the latter stages of a purpose-designed comparator). The frequency of Ei for sine to square wave converter using a general-purpose op-amp, for example, should be below 100 Hz.

Why is the inverting amplifier used?

Because the slew rate of an inverting Op-Amp is higher than that of a non-inverting type setup, it is commonly employed for high-frequency applications where high i/p impedance is not required.

Why is a unity gain amplifier used?

What is the formula for inverting an amplifier?

How do you utilize an op-amp as a non-inverting amplifier?

By connecting the input to the op-amp’s positive terminal and the op-amp’s output voltage signal as feedback to the input of the inverting terminal, an op-amp can be utilized as a non-inverting amplifier.

Op-amps are utilized in today’s electronic devices, including consumer, industrial, and research products. Many typical IC operational amplifiers are merely a few cents, but, in limited quantities, certain integrated or hybrid operational amplifiers with unique performance criteria might cost over $100. Op-amps can be packed as individual components or used as parts of larger integrated circuits.