What is Analog to Digital Converter

An analog signal is a signal that contains power from a physical source. These sources can be electricity, sound, radio waves, or visible light.

For example, you can record the sound of a person singing by connecting a microphone to a singing voice recorder.

On the other hand, a digital signal contains information that can be expressed in digits such as ones and zeros.

Therefore, a digital recording is a recording of the sounds made by a microphone or other physical source.

In this article, you will learn about the Analog to Digital converter and how it’s used in electronics.

What is Analog to Digital Converter 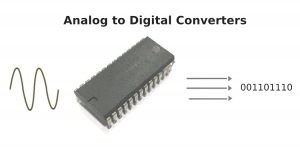 An analog to digital converter (ADC) is a device that converts an analog signal into a digital signal.

A digital signal can be stored and manipulated by electronic devices. To process the information in a digital signal, it must be converted from digital back to analog.

The device that performs this conversion is called an analog to digital converter (ADC).

The information that is converted from analog to digital is stored in binary form. The binary form of a number consists of ones and zeros.

Analog signals are used for audio and video signals that electronics such as amplifiers or speakers need to be processed.

Digital signals are used to store information such as text, images, and sounds on computer hard drives or compact discs.

What are analog to digital converter examples?

To give you a better perspective of ADC, we will look at some of the live examples. Examples of analogue signals include pressure, temperature, light, and sound. These signals are converted to digital signals in the form of bits.

Digital signals are sent over a network to different devices such as computers, cell phones, and wireless devices.

Let us now look at some examples of ADC.

An analog clock is an example of ADC. It takes the continuous rotation of the hands and converts them into numbers that display time in digital format on its face.

Dials showing pressure, temperature, light intensity, etc., are also examples of analog to digital conversion. They convert the information from analog to digital so that it can be displayed on a monitor or a display device connected to it.

Digital cameras are another example of ADC where light is converted into bits so that they can be stored on flash memory cards or printed out using an inkjet printer connected to a computer.

A digital thermometer is another example of ADC where temperature information is converted into bits so that it can be displayed on a digital readout or saved as digital information.

Digital thermometers are also used in cars and household appliances such as ovens and microwaves.

Pressure gauges in cars, airplanes, and rockets are also examples of ADC. They convert the readings from analog to digital so that it can be displayed on a digital readout or stored as digital information.

A calculator is an example of ADC where manual input is converted into bits for storage.

Speedometers in cars, airplanes, and bicycles are examples of ADC where the speed is converted into bits for display.

Instruments used in automobiles like odometers, tachometers, and speedometers are also examples of ADC where the readings from analog to digital it can be displayed on a digital readout or stored as digital information.

Components of Analogue to Digital Converter

Now that we have given you examples of ADC, let’s look at the components that make up this device.

A typical Analogue to Digital Converter is divided into three sections. These are the Input stage, Processing stage, and Output stage.

The input section of an ADC is usually made up of an amplifier and filters.

The input section is usually made up of an amplifier and filters. The amplifier amplifies the analog signal to a level that can be accurately measured by the ADC. The filter removes any unnecessary noise or fluctuations from the signal before it is digitized.

The processing section of an ADC is used to convert analog signals into digital information that can be stored, transmitted, or displayed.

The first function is to amplify signals from the input stage so that they are at a level where they can be accurately measured by the ADC. The second function is to convert these amplified analog signals into digital signals for storage, transmission, or display.

The output stage is used to read the ADC’s contents.

The output stage of an ADC is used to read the ADC’s contents. This stage converts the digital information stored in registers into a form that can be displayed or used for further processing. The most common outputs from an ADC are 4-20mA current and RS-232 voltage levels.

The output stage of an ADC also provides a means for controlling the operation of the ADC, such as enabling/disabling and measuring functions. It also provides communication platforms with other devices such as microprocessors and computer systems.

How does analog to digital converter work 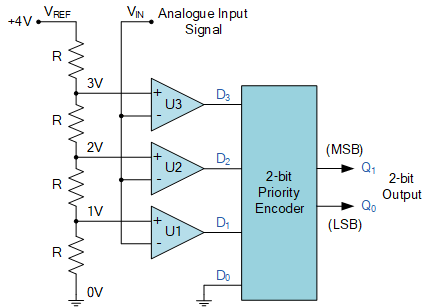 Now that we have seen the different segments of the conversion process, let’s see how these devices work to execute their functions.

Analog-to-digital converters are able to convert the analog signal into a digital format. This is done by converting the analog signal through a series of circuits and amplifiers. This can be done in two ways:

Resistor and capacitor are used to convert the analog signals that are present at the input of an ADC. Both these components have their own advantages and disadvantages as they will be discussed later on with examples.

Transistors, diodes, and capacitors are used to convert an AC signal into a DC signal that can be processed by an ADC. The main purpose of these components is to amplify the incoming signal from its starting value to a level that can be handled by an ADC without any distortion or noise.

The output of the amplifier will then go to one of three sections: The voltage divider, A/D converter, or A/D buffer.

The voltage divider circuit is used to take the output of the amplifier and reduce its value to a level that an ADC can handle. The power required for this is supplied by the supply voltage of the ADC.

The A/D converter circuit is used to convert a binary signal into a digital signal which can be processed by an ADC.

In order to convert a binary signal into a digital signal, transistors are used in conjunction with diodes and capacitors.

Types of Analog to Digital Converters

It is important to note that all ADCs are not all the same. They come in different forms and variations. Let’s look at the main types of analog to digital converters in the market.

As the name suggests, this type of ADC is the simplest to implement and use. It is the fastest of all types of ADCs. Direct ADCs are also known as “straight” or “unbuffered” ADCs.

In this converter, signal conversion is direct and straightforward.

This implies that the data is directly copied from the input to the output without any buffering or buffering of any kind. The main advantage of this converter is speed.

Full Buffer ADCs always have some form of buffering which means that they need some form of “output hold”. The output hold is an electronic circuit that will hold on to the data being read until it has finished reading all the data from an analog signal.

This type of converter utilizes current feedback to convert an analog signal into a digital form.

A pipelined analog to digital converter is one that has several stages of amplification and sampling.

The sampling stage is followed by a digitization stage in which the signal is converted to a digital word.

Flash ADC is a high-speed analog to digital converter. It is an integrated circuit that converts analog signals into digital signals. The flash ADC has a fast sampling rate and a high performance. Flash ADC has one or two digitization channels and the signal processing is performed in the digital domain.

Accuracy of analog to digital converters

The conversion of signals and data from analog to digital may be tedious and straining. So, are these devices accurate? And what is done to guarantee the accuracy of these devices?

The basic error sources in an ADC are due to the nonlinearities of the signal source and the electronics used in the conversion process.

There are several techniques that can be used to improve accuracy:

When an analog signal is converted to a digital signal, the data undergoes noise and distortion. This distortion can be due to nonlinearities in the system or the electronics that are used in the conversion process. The impact of nonlinearly changing components on an analog-to-digital conversion is called nonlinearity.

ADCs are designed to improve their accuracy. One of the methods is by using better linearity in the system or using a filter to reduce the nonlinearity.

In order to improve the accuracy of an ADC, care should be taken to minimize the noise in the input signal and to use a more stable reference voltage.

Before you make a purchase, you need to check whether the price is competitive or not. If it is competitive, then go ahead and buy the product.

Otherwise, you can use the services of sourcing agents such as ICRFQ. We are offering you the best prices for buying analog to digital converters in China.