Where Are Integrated Circuits Used? 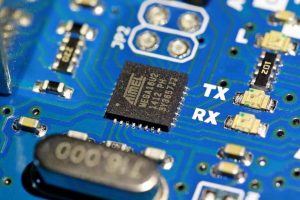 An integrated circuit, or IC, is an electronic device that integrates a number of discrete electronic components into a single package. An IC has several parallel elements known as “layers” that each perform a different function.

These layers are the transistor layer, resistor layer, capacitor layer and fifth layer called the logic gate layer. Each of these layers has specific functions in the integrated circuit and is made using different techniques. The integration of these circuits has led to miniaturization, which has in turn opened up new applications for them. Read on to know more about this important component and where it is used.

A microprocessor is the most common and important application of integrated circuits. They are used in all computers, smartphones, any piece of equipment with a digital interface, and even toys.

They perform all the functions of a computer using just one chip, which means less space, less power consumption, and less cost.

A memory chip is an integrated circuit that stores binary data. It is used as computer memory and can be either volatile or non-volatile. Computer memory is used as an extension to your hard drive and is used to store information like text documents, photos, videos and audio files even after the computer is shut down. Voltage is used to store information in memory chips. High voltage represents the binary digit 1 and low voltage is 0. A memory chip can be programmed to store data in the form of 1s and 0s. This data can be recalled when required.

Signal processing is used in electronics to detect and analyze electronic signals. It is very common in things like audio receivers and radio transmissions. An integrated circuit is used to condition a signal by amplifying it, filtering it, or converting the signal into another form. For example, a signal may be amplified to increase its strength so that the signal can be captured by electronic equipment. A signal conditioner performs several functions and is made up of several ICs. Signal processing is a very important aspect in the design of electronic equipment.

An IC is used to solve a math problem and obtain an answer with a minimum number of computations. This is done by programming the IC with instructions and inputting the numbers to be calculated. These circuits can be used to calculate complex math problems like square roots, logarithms, factorials and fractions. These circuits are available as adders, dividers, multipliers and dividers.

IC are used in oscillators to generate a frequency.

An amplifier circuit can be used to amplify radio signals as well as audio signals. ICs are used in amplifiers because they allow for fast switching speeds which are required for high amplification rates.

A timer is a circuit that measures time and produces a periodic output such as sounds or lights based on the time measured by the timer. A timer circuit is used to program when certain events will occur such as when to turn on lights or start motors, regulate temperature, and control other electronic devices like televisions, VCRs etc.. An IC can be programmed with instructions that tell it when certain events will occur like turning on lights and starting motors etc.

This makes them very useful for timing purposes and also helps to keep track of time accurately since they generate periodic outputs periodically based on time measured by them.

A logic gate is a circuit that only allows certain signals to pass through a certain point. An IC is used in logic gates because it can perform fast switching speeds which are required for high amplification rates. Logic gates have a wide range of applications in the modern world. They are used for digital logic, digital and analogue to digital converters, and also for memory.

Integrated circuits are used in electric sensors to record information such as temperature, pressure, accelerations, and voltages.

These sensors are very useful for modern technology since they help us to do things like measure temperature quickly as well as accurately.

When used in sensors, ICs are positioned to collect information from the environment around it.

They can also be used to collect information from other sensors.

Networking refers to the exchange of data between different devices. Integrated circuits play a big role in the whole networking concept. They are used in routers, switches, and bridges.

They can also be used in a wide range of other devices such as printers and modems.

Integrated circuits are used to transfer data in many different ways: by optical fibers, copper wires, or wirelessly.

Energy management refers to the process of managing energy consumption. Integrated circuits are used in various forms of energy management for controlling devices that consume energy. They can be used in thermostats, lights, and appliances.

The main purpose of integrated circuits is to save power by only using certain parts of the chip at certain times when it is being used.

This is done by using a digital signal controller that controls on/off signals for different parts of the chip that consume power when they are not being used.

When selecting an IC distributor in China, it is important to find a reliable distributor. You will want to select a supplier that has a good track record and is reliable.

This is where ICRFQ comes in. We are a reputable and reliable IC distributor in China. We offer a variety of top-rated ICs from some of the world’s most trusted brands.

Contact us in case you want to use an integrated circuit for any of the purposes that we have listed here.