Why Is A Transformer Rated In KVA? 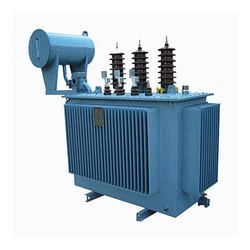 The fundamental reason that all AC sources (transformers or alternators) are rated in VA (or KVA or MVA) is that the load attached determines the current power factor. Because the load power factor is unknown (during the transformer manufacturing process), they are rated for resistive loads (PF = 1).

Also, why is the generator rated in kVA while the motor is rated in KW? A motor produces mechanical output, which is stated in kW. It has a fixed Power Factor, i.e., the motor has a specified power factor, and its rating is written in KW on the Motor nameplate data table. As a result, instead of kVA, we rate motors in kW or HP (kilowatts/ Horsepower). Distribution transformers can generally be reverse connected without lowering their KVA capacity on the nameplate. There is a ” turns ratio compensation ” on the low voltage winding of HPS transformers under 6kVA three-phase and 3kVA single-phase; there is a “turns ratio compensation.”

What Is A Transformer

Let’s recap what a transformer is before we get started. A simple transformer definition is a static electrical device that converts electrical energy from one electrical circuit to another without changing frequency through electromagnetic induction. It’s worth noting that energy is transferred from one circuit to another via mutual induction, which occurs when flux created in the primary winding connects with the secondary winding, as we’ll see later. Transformer failure can also happen if proper care isn’t taken when operating it.

Depending on the scenario, a transformer’s primary function is to either step up or down the voltage. Transformers work on the simple principle of mutual induction between the primary and secondary windings, also known as coils, which help transfer energy from one circuit to another.

Why Is A Transformer Rated In KVA But Not In KW? 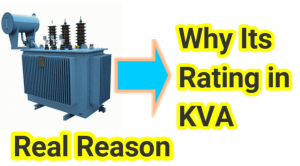 The unit of electric power is kilo-volt-ampere (KVA). The power factor isn’t considered when calculating kVA for any piece of equipment.

This means that kVA is the measurement unit for equipment whose output power is not affected by the power factor. Alternator, Transformer, and UPS ratings, for example.

KW (KiloWatts) is, on the other hand, the unit of electric power for equipment that has a power factor. Kilowatts are the standard unit of measurement for machines that create mechanical output. Consider electric motor ratings.

The unit of perceived power is the KVA. It’s a mix of real and reactive strength. Transformers are built without regard for the load that will be connected. As a result, it can be used to connect any electrical load (either resistive, capacitive, inductive, or combination loads). There may be some confusion about the sort of load connected if the transformer is rated in KW. This is why the transformer has a KVA rating. By doing so, we can eliminate any ambiguity about the type of load linked.

Reasons Why Transformer Is Rated In KVA

The manufacturer has no idea what type of load (inductive, capacitive, or resistive) will be connected in the future while building a transformer. The load also influences the power factor. Pure inductive (lagging) and pure capacitive (leading) loads do not exist, implying that all loads, whether inductive or capacitive, have some resistance. As a result, the loads use both active and reactive power supplies.

An induction motor, for example, has windings that are both inductive and resistive. As a result, it pulls both active (kW) and reactive (kVAR) power, resulting in a total power drawn by the motor equal to the phasor sum of kW and kVAR, which equals kVA. Furthermore, the current used by the load is determined by its power factor, which is unknown to the manufacturer at the time of design. As a result, a transformer’s rating is always in kVA, allowing it to be used for any load (lagging or leading).

A transformer’s temperature rise is proportional to the perceived power (kVA) that runs through it. This is also one of the main reasons the transformer’s rating is indicated in kVA rather than kW.

In practice, electrical devices that act as sources (such as alternators and transformers) are consistently rated in kVA to ensure that their operation is independent of the load power factor. In contrast, electrical devices that act as loads (such as motors) are consistently rated in kW and draw current from the source based on their power factor.

The power rating is in KVA (Apparent power), not KW (active power). The transformer’s power loss is the leading cause behind its KVA rating. There are two types of power loss in a transformer: copper and iron.

The ohmic resistance in the primary and secondary windings causes copper loss. The copper loss is proportional to the current passing through the windings.

The alternating flux causes an iron loss in the transformer core. It is made up of eddy current and hysteresis losses.

Why Is The Motor Rate In Kw And Transformer In KVA?

A transformer is an electrical device that converts energy from one circuit to another. It can be used with any sort of load or circuit, including resistive, capacitive, and inductive loads and circuits. As a result, unlike a motor, bulb, or other equipment with a known circuit route and specifications that allow it to calculate power factor values, a transformer or generator’s p.f is determined by the type of load the user will connect to the transformer. It is therefore impossible to determine the active power rating without knowing the p.f. A motor is measured in kW, whereas a transformer is measured in KVA.

How do you convert kVA to kW?

How do I choose a transformer size?

Which Is Not Loss In Transformer?

No-Load Losses (Excitation Losses) are a type of loss that occurs when there is no load on the systemThe loss in a transformer with no load attached to the secondary is stimulated at the rated voltage and frequency. Core, dielectric, and copper losses in the winding due to exciting current are all examples of no-load losses.

How Many Amps Is A 150 KVATransformer Suitable For?

How many watts is 1kVA?

Originally Answered: What does 1kva equal in watts? Watts are a unit of power, and power is defined as voltage times current. So, 1 KVA = 1000 volt-amps, which means volts multiplied by amps equal 1000 watts.

When the true power is 3000W, and the power factor is 0.8, what is the perceived power in kilovolt-amps? 8.125 kVA (kilowatt-hours-per-volt-ampere

What Is The Kva Rating Of The Generator?

In other words, the higher the kVA rating, the more power the generator generates. 1,000 volt-amps equals a kVA. When you increase the voltage (the force that pushes electrons through a circuit) by the amps, you get this (electrical current). Kilovolt-amps are used to quantify a generator’s ‘apparent power.’

What Is The Difference Between Kw And KVA?

The power factor is the major distinction between kW (kilowatt) and kVA (kilovolt-ampere). The actual power unit is kW, but the apparent power unit is kVA (or real power plus reactive power).

What Is KVA Power?

A KVA stands for 1,000volt-amps. A volt is a unit of electrical pressure. The product of the volts and amps is known as apparent power (the absolute value of complicated power, S). A watt (W), on the other hand, is a unit of measurement for actual power.

Can a step-up transformer be utilized as a step-down transformer with the same AC supply?

Yes, you can do it, but you must take the following precautions: The LV winding, which was intended to be the secondary winding by design, will now operate as the primary, and the magnetizing inrush current will be higher than predicted.

It’s crucial to know whether the transformer is rated in KVA or KW. Still, it’s also essential to know the transformer’s per unit impedance when connecting it to a system, as this simplifies line calculations.