Why Single Phase Induction Motor Is Not Self Starting? 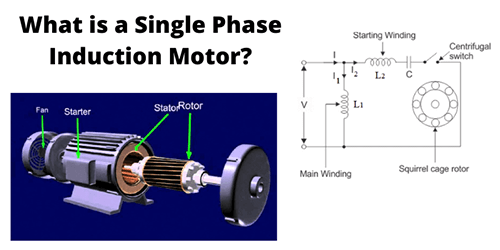 We know that the main aim of the motor is to convert electrical energy into mechanical energy. The rotational motion of the motor comes from the interaction between the stator and rotor poles which are made of conductive materials like copper or aluminum.

Whenever a voltage is applied across these materials, a rotating magnetic field is created inside them. When we connect a load to this rotating field, it starts rotating too with the same speed as that of the magnetic field.

What is the working principle of single phase motor?

It is worth noting that a single phase motor is just as a three phase motor only that it runs on one phase. Each phase sets up an oscillating magnetic field whose movement is back and forth instead of rotary motion like the three phase. Because of this motion, the single phase will not have a starting torque.

Now, if we connect a load to this rotating field, the load starts rotating at the same speed as that of the magnetic field. This is how three phase induction motors start. However, in case of single phase induction motors, we have only one winding in their stator. As a result only one magnetic field is created and when we connect a load to this magnetic field, it starts rotating at a constant speed. But, when this motor is started from rest it does not rotate for the following reason:

So, at the start, there is no torque acting on the motor shaft and hence no rotation takes place.

one way to explain the reason why a single-phase motor is not self-starting is by using the double-field revolving theory. This concept is based on the idea that an alternating uniaxial magnitude can be represented by two rotating vectors that are opposite to each other. Therefore, if the magnitude of one vector is increasing, then the magnitude of the other vector must be decreasing.

The double-field revolving theory explains that at the start of a single-phase motor, one rotating magnetic field that is produced by its stator is in a clockwise direction and the other magnetic field that is produced by its rotor is in an anti-clockwise direction. Therefore, since these two vectors are opposite to each other; their magnitudes are equal to each other and hence no torque is generated on its shaft.

The torque developed depends on the angle of lag between two vectors; when this angle becomes equal to 90° then maximum torque will be generated on its shaft. Therefore, the only way to generate maximum torque on its shaft is by increasing the frequency of the voltage supply that is applied to it.

How to make single phase induction motor self starting?

Now that we have seen that a single-phase induction motor is not self starting, doe it mean that we can’t do anything about it?

No, you can change things to your favor. To make it self starting, you will have to deploy a two phase construction on this motor. That means we will temporarily convert the single-phase motor into two phase motor during the starting time.

The first step is to convert the single phase motor into a two phase motor. For this purpose we use a 3-phase converter. This converter is nothing but a rotary switch that has three terminals and the middle terminal is common to all three phases. The other two terminals are connected to two phases of the input supply.

So, how does it work?

It works as follows:

Classification of single phase induction motors based on their starting techniques

Single phase induction motors are divided into three major classes based on the methods used turn them self-starting. These methods include:

-Capacitor: Under this class, the induction motor is started with the help of both the auxiliary winding and the capacitor. The primary role of the capacitor here is to supply the starting current for the motor. By using this method, the phase voltage of this motor is temporarily a 2-phase.

-Shaded pole motor: In this method, the single-phase motor is triggered by the motion due to the magnetic field. Where does this magnetic force originate from?You may ask.

Why capacitor is used in single-phase motor?

The capacitor is used in the starting of single-phase motor because it is a passive device. The capacitor has a high voltage and low current rating. The capacitor is also non-inductive, meaning that it does not create its own magnetic field. Since the motor’s rotor has no permanent magnets, there is no need to use inductive starting methods. The only reason to use a capacitor in this case would be to ensure that proper rotor rotation occurs during the start sequence.

However, most electrical motors are two-phase motors and so they require two capacitors (or series circuits) connected to the terminals of the stator windings. One capacitor charges while the other discharges during each half cycle of the AC power source (the “excitation” or “start” phase).

If a single capacitor were used, it would charge and discharge with each half cycle without ever fully charging or discharging at any given time. This results in an excessive amount of resistance and would result in a slow start sequence (as well as potential damage to components).

What are the applications of single phase motors?

Despite not having a self starting feature, single phase motors have quite a wide range of applications.

They may be used for mechanical systems, such as pumps and fans, where the motor does not require full torque output.

They may also be used for electrical and electronic applications that do not require high starting torque, such as electric drills.

What are the advantages of single phase induction motors over the three phase?

-Small and compact: Single phase motors are smaller and lighter than three phase motors. They also have less components, which translates to lower production cost.

-Highy efficiency: Efficiency in this case means the ratio of output power to input power, and is defined as

At this point, you know why single phase induction motor is not self starting. The good news is we have discussed how to make it self starting. So, you should not lose all your hopes.

So, what next? Contact your trusted sourcing agent for the quality single phase induction motors in China.