Everything You Need to Know About Work Unit 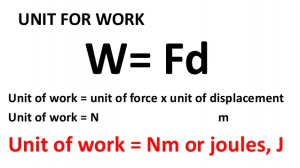 In physics, work is defined as the measure of energy transferred due to the displacement of an object by the application of an external force on the object. When the force is maintained at a constant level, the computation of work can be done by multiplying the length by the component of force on the same path. Therefore, work is often computed as the amount of force on an object multiplied by the distance of displacement. Work is one of the most applied areas in physics and other disciplines. Furthermore, work units can be used in many fields depending on the application and its relationship with concepts such as energy and time. This article highlights everything you need to know about the work unit. The post will define work units and provide examples, relationships with other concepts, and the difference between work and power.

What Is a Work Unit?

The work unit is the unit of measuring work. In other words, work units can be described as the measurement of work using accepted metrics of units of measurement. Work is often measured in Joules (J). one joule is the measure of one-meter displacement caused by a force of one newton. In most cases, this can be described as a newton-meter (N-m). However, the newton-meter is a unit used for torque, meaning that it can be confusing when used as a work unit. Therefore, the accepted work unit is always joules, though there are other units used to measure work.

What Are Other Work Units?

Basically, work can be measured in many units, depending on where it is applied. Units used to measure work include:

In physics, work is considered a physical dimension similar to heat. Therefore, it can be measured using units such as therm, calorie, and BTU. The use of a newton-meter is always dimensional.

In other words, work can be expressed in many ways depending on the situation and conditions. This aspect means that every expression of work done comes with a different unit of measurement. For instance, work done in compressing gas can be expressed as the product of pressure and change in volume of the gas. 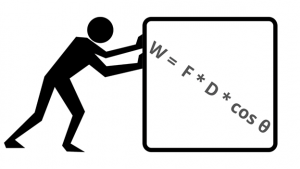 What Is the Concept of Work?

As suggested earlier, work is done when an external force causes displacement on an object from point A to B. Therefore, work can only be accomplished when a body is displaced as a whole from one point to another. Additionally, work is said to be accomplished in situations, such as when gas is compressed and when a shaft is rotated. Some invisible motions can also happen when an external force is applied to an object. A good example of such movements includes the displacement of particles by a magnetic force.

On the other hand, no work done is when the displacement of the object does not take place. For instance, when the force applied does not cause any displacement, then no work is done. When you hold a stationary object, you do no work unless it is displaced. This is primarily because holding it in one position does not transfer energy to the object. In this case, no work is done. 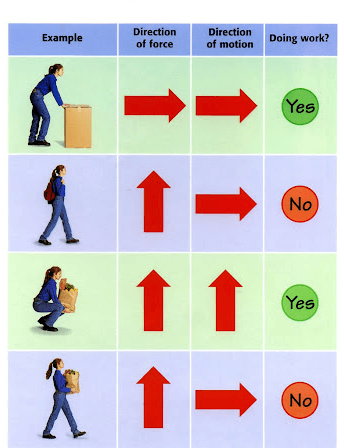 What Is the Difference Between Work and Power?

Work and power differ in many ways. The table below is used to highlight the differences between work and power.

Work and power are two important concepts in physics. Therefore, it is crucial to understand the differences and how they relate.

What Is the Relationship Between Work, Force, and Energy?

When a force is applied, it can cause work done on an object by changing its energy. This aspect shows the relationship between work, energy, and the applied force. Therefore, the energy of an object can be used to quantify the amount of work done on the object. In this case, energy and work can be measured using the same work unit.

What is the unit of work?

A work unit is derived from force and displacement.

How does work affect energy?

The energy of an object can measure the object’s capacity for work. Work is considered done on an object when there is a transfer of energy on the object, resulting from the application of an external force.

What is the relationship between work, energy, and force?

Force can lead to work done by changing the energy of an object.

What is the comparison between units of work and power?

Power is the amount of work done on an object over time taken to accomplish the work. In other words, power is work divided by time (P = W/t).

In conclusion, work is a general concept that can be used in many instances depending on the conditions. Accordingly, this means that the work unit varies significantly with the situation or application. For instance, work can be measured in many ways using different units that correspond with the applied force and the type of displacement that occurs. In most cases, force, displacement, and the angle between force and displacement are crucial in quantifying work. However, the angle between force and displacement is sometimes not applicable, for instance, when displacement happens in a straight line or the same direction as the force. This article has highlighted the basics of the work unit by defining the term and exploring examples and comparisons.