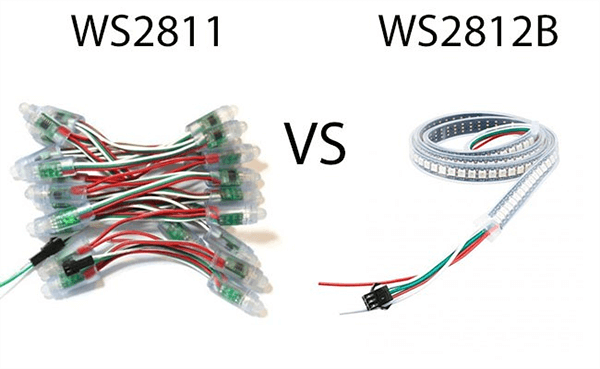 LED strip lights are self-adhesive and flexible electronic circuits with LEDs spaced at regular intervals. LED strips are often sold in 5-meter rolls and can be cut at specific intervals or combined to make a longer LED strip.

LED strip lights are often powered by a DC voltage of 5V, 12V, or 24V. LED strips on the market are typically designed to work with a 12V supply. LED strips are inexpensive lighting equipment, simple to install, and quickly transform the mood. In this article, we’ll look at the differences between WS2811 and WS2812B, but first, let’s clarify what an LED strip is.

What is an LED Strip Light?

LED strip lights are a novel and versatile lighting option. Although there are many variations and exceptions, they all share the following characteristics:

● The LED strip comprises many individuals LED emitters installed on a thin, flexible circuit board.

● Come on a long reel (usually 16 feet / 5 meters), can be cut to length, and include double-sided adhesive for attaching.

Anatomy of an LED strip

A half-inch (10-12 mm) wide LED strip light can be as long as 16 feet (5 meters). With just a pair of scissors and a ruler, they may be cut to desired lengths by following the cutlines, spaced every 1-2 inches.

Pre-applied double-sided adhesive is on the backside of the LED strip. Peel the liner off the LED strip and stick it to almost any surface. LED strips can be put on curved and uneven surfaces because of the flexibility of the circuit board.

The metric lumens are used to measure the brightness of LED strips. Different LED strips, unlike incandescent bulbs, might have varying levels of efficiency; therefore, a wattage number isn’t always indicative of actual light production.

● Number of LED Per Foot

A lumen brightness specification on an LED strip light is a red flag. You should also be wary of low-cost LED strips that claim to be bright, as they may overdrive the LEDs and cause them to die prematurely.

It might be difficult to distinguish between LED strip lights designed for good performance and longevity and those that are not. Here are some ideas to help you figure out where to look.

Composition and Quality of Circuit Boards – The quality and specification of the underlying circuit board are critical for higher power LED strips. Copper material is required because large levels of electrical current must pass through each section. To ensure that the circuit board can manage the higher power, look for LED strips with a copper weight of at least 2 oz, preferably 4 oz. Otherwise, you risk voltage loss.

LED Quantity & Quality – LED emitters are directly responsible for the efficiency, quality, and consistency of light output. Look for LED strip lights with strict quality standards and specifications on the LED emitters. Be wary of LED strips that claim a high power despite a low LED count, as this could imply overdriving of the LED emitters, which could lead to premature failure.

LED Strip Surface – High-quality LED strips will normally have an extra layer of white paint to help boost light reflectivity and output. This step will be skipped by lower-cost LED strip options, leaving the copper color visible. In an aluminum channel installation, this can impact both the brightness and hue of the light. 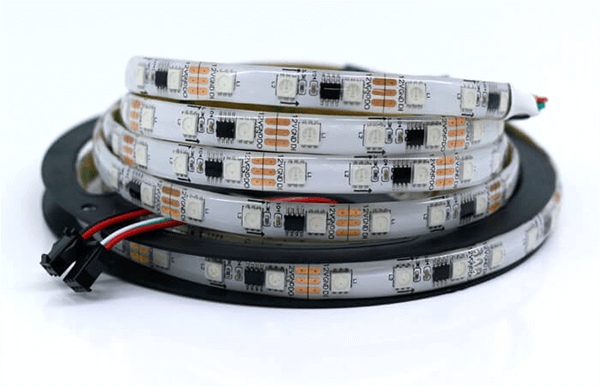 The WS2811 is a simple RGB LED strip. It means that you can display every single LED color with the help of an information signal. These signals can be obtained from various sources, including the Digital pin on an Arduino board, an appropriate RGB LED controller, etc.

The important thing to note is that this information signal is a PWM heartbeat. The PWM heartbeats power the LEDs. The ws2811 driver IC is the source of the word.

This is referred to as ws2811 LEDs. This addressable RGB LED ws2811 is powered by DC 12V to see the voltage difference. Even at DC 12V, the WS2811 RGB LED Controller we’re constructing today is capable. 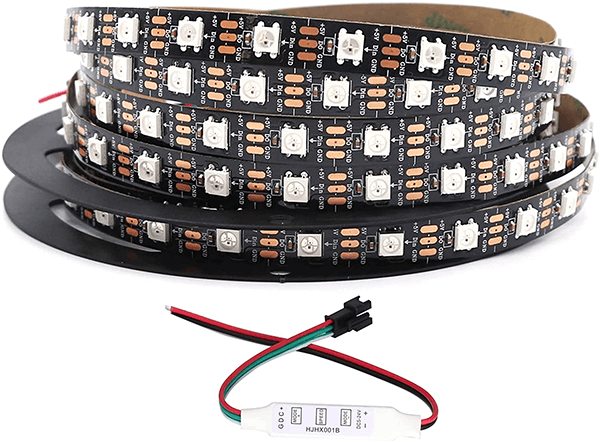 The control circuit and RGB chip are incorporated in a package of 5050 components in the WS2812B intelligent control LED light source. It has an intelligent digital port data latch and a signal reshaping amplification driving circuit on the inside. A precision internal oscillator and a 12V voltage programmable constant current control element are also included, ensuring that the color height of the pixel point light remains consistent.

The data transfer protocol has a single NZR communication channel. The DIN port receives data from the controller after the pixel power-on reset; the first pixel collects initial 24bit data and sends it to the internal data latch. The other data is molded by the internal signal of the amplification circuit and delivered to the next cascade pixel via the DO port.

The signal is reduced to 24 bits after transmission for each pixel. Pixels use auto reshaping transmit technology; thus, the number of pixels in a cascade is not limited by signal transmission speed. LEDs have low operating voltage, which is excellent for the environment and saves energy. They also have strong brightness, a large scattering angle, good consistency, low power, and long life. The integrated control chip in LEDs is becoming a simpler circuit, small volume, and easy to install.

The WS2811 LED chip operates at 12 volts. A WS2812B chip, on the other hand, only needs 5V to function. When using an LED strip with many LEDs, you’ll notice a lot of voltage drop along the strip, which means the last few LEDs at the strip’s far end from the board will have a lower voltage.

For example, imagine your strip contains 30 LEDs, and the voltage drop near the end is 2V. Using a WS2811 chip, the last few LEDs will receive about 10V. This is still OK for an LED designed to operate at 12V. If you use a WS2812B that works at 5V, the voltage drop will be 3V rather than the reported 5V. That’s a significant voltage drop right there.

Differences in LEDs Controlled Between WS2811 and WS2812B

Differences in Power Consumption between WS2811 and WS2812B

The use cases you have will determine whether you should use WS2811 or WS2812B. The WS2811 is the obvious choice for managing a long LED strip.

The WS2812B, on the other hand, is the way to go if you want to control LEDs down to the granular level of a single LED. As a result, I hope that this article has clarified the differences between WS2811 and WS2812B.

Lastly, to purchase quality WS2811 or WS2812B, contact us at ICRFQ. We are the leading manufacturer of electrical components in China.