BJT vs MOSFET: What’s The Difference? 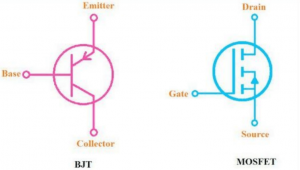 The transistors are a group of electronic components used for BJTs. MOSFETs are electronic semiconductor devices that provide a changing electrical o/p signal exchange for minor i/p signal variations. These transistors can function as a switch or an amplifier because of this property. In 1950, the first transistor was introduced, and it is considered one of the most important inventions of the twentieth century.

The technology is rapidly evolving, and many transistors have been introduced. BJT (Bipolar Junction Transistor) is the first form of transistor introduced, followed by MOSFET (Metal Oxide Semiconductor Field Effect Transistor). This article explains the fundamental differences between BJT and MOSFET to grasp the idea better. 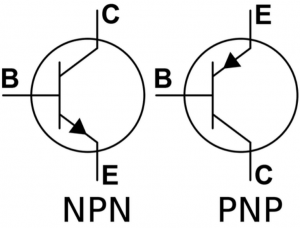 A BJT is a silicon piece with three regions and two junctions. The P-junction and N-junction are the names of the two locations.

The electrons flow from the emitter to the base due to the forward bias at the BE junction, which reduces the barrier potential. Because the base is narrow and lightly doped, it has a tiny number of holes; as a result, around 2% of the electrons from the emitter recombine with the holes in the base region and flow out of the base terminal.

A diode is a symbol for a p-n junction. A transistor is equivalent to two diodes connected back to back since it has two p-n junctions. The BJT analogy with two diodes is known as this. 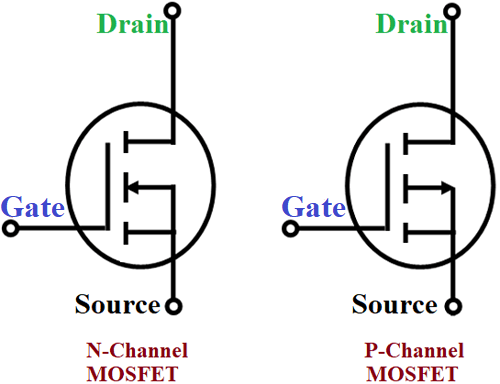 A MOSFET is a device that amplifies or switches the voltage in a circuit. The voltage at the gate creates a field that permits current to pass between the source and the drain. The voltage on the gates could cut off the passage of electricity.

The MOS capacitor, the semiconductor surface between the source and the drain, is critical to the MOSFET’s operation. The amplifier can catch practically all signals due to its infinite input impedance. Source, gain, and drain are the three terminals.

One of the benefits of MOSFETs is that they don’t require input current to control load current. MOSFETs come in two fundamental types: depletion and enhancement. Depletion MOSFETs require the gate-source voltage to turn off the device. The enhancement type, in which transistors require gate-source voltage to turn on the device, is another option.

Radio-controlled applications (such as drones, boats, or helicopters), controlling the auto intensity of street lights, motor torque-speed control, industrial control environments, robotics, pairing with microcontrollers to establish systems that control lights, and so on are all examples of MOSFET applications.

MOSFETs can be used in high-power, current-control applications, and digital-analog circuits. The gate voltage is used to control the output of the device. It has a positive temperature coefficient. They have a higher profile than BJT transistors.

BJT vs MOSFET: What’s The Difference?

Below are the main distinctions between BJT and MOSFET transistors.

MOSFETs and BJTs each have their characteristics, advantages, and disadvantages. Unfortunately, because the issue is so subjective, we cannot state which is “better.” This is a question that does not have a clear and conclusive solution.

Several distinct considerations must be considered when choosing which to utilize in a project. These include, among other things, power level, driving voltage, efficiency, cost, and switching speed – this is where knowing your project comes in handy.

In most power supplies, a MOSFET is more efficient. Using a BJT in a battery-powered device with a fluctuating load and restricted power supply, for example, is not a good idea. If a BJT is used to power anything with a predictable current draw (such as LEDs), this is good because the base-emitter current may be tuned to a fraction of the LED current for greater efficiency.

Why Is MOSFET More Efficient Than BJT?

There are numerous advantages to employing MOSFETs rather than BJTs, including the following.

Because most charge carriers in a MOSFET carry current, it is far more sensitive than a BJT. As a result, when compared to BJT, this device activates relatively quickly. As a result, this is mainly used to switch SMPS power.

MOSFETs have a very high input impedance in the megohms region, whereas BJTs have a kiloohms input impedance. As a result, MOSFET manufacturing is appropriate for amplifier-based circuits.

MOSFETs produce less noise when compared to BJTs. The random intrusion within a signal is referred to as noise here. When a transistor is used to boost a signal, the internal process of the transistor causes part of this random interference. BJTs, in comparison to MOSFETs, typically introduce a lot of noise into the signal. As a result, MOSFETs are good for signal processing when voltage amplifiers aren’t available.

In comparison to BJTs, MOSFETs are incredibly tiny. As a result, they can be arranged more compactly. MOSFETs are employed in computer and chip processors to achieve this result. As a result, as compared to BJTs, the MOSFET design is relatively straightforward.

Because a MOSFET’s temperature coefficient is positive for resistance, parallel operation of MOSFETs is simple. When a MOSFET transmits amplified current, it heats up quickly, raises its resistance, and allows the current to flow parallel to other devices.

Because the bipolar junction transistor’s temperature coefficient is negative, resistors are necessary throughout the parallel process.

BJT and MOSFET are two different types of transistors; BJT is a FET transistor, while MOSFET is a BJT transistor. Both are utilized in various sectors and for various gadgets. Both are used to switch or increase the current flow in circuits. MOSFETs are more commonly utilized than BJTs because of their incredible power and endurance. And it is admired by a broader range of sectors.

For more details on BJT and MOSFET electronic components, contact us at ICRFQ. We are the best electrical components manufacturer in China.