Everything You Need to Know About Buchholz Relay 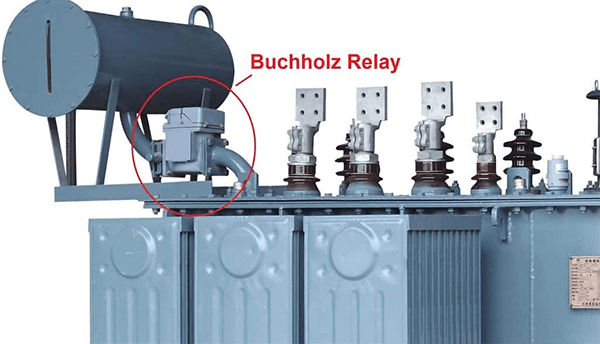 What Is a Buchholz Relay?

Some electrical transformers, choke coils, high-voltage electrical capacitors, and reactors have a Buchholz relay as a safety measure. Its purpose is to prevent damage from spreading in the event of a short circuit, arcing, or other harmful electrical problems, such as an explosion or a developing overheating condition. Max Buchholz, a twentieth-century engineer and inventor whose ancestors immigrated to the United States from Germany in the 1800s devised the relay concept. He initially created the Buchholz relay in 1921, but it was not widely used in the United States until the 1940s.

Each Buchholz relay serves as a circuit breaker and is typically mounted on the top of oil-filled electrical transformers. An oil reservoir tank known as a conservator can be found. The device’s principal function is to keep the transformer’s dielectric constant or insulating quality constant, which it does by managing the supply of circulating oil from the conservator and detecting air leaks in the system. Safety switches, such as the Buchholz relay, are an important part of today’s power distribution systems. In a localized accident, they are meant to prevent damage to broader sections of the system, which could otherwise propagate and overload other transformers further down the line. 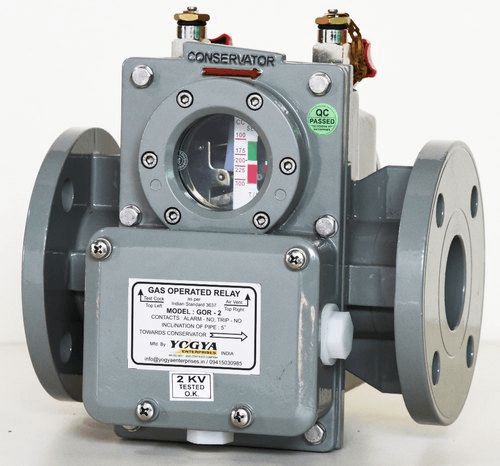 The architecture of such devices is robust, allowing them to endure large electrical currents and changing weather conditions. The dome-shaped housing is made of weatherproof aluminum. It includes mechanical test and trip circuit controls and a tempered glass inspection window to monitor insulating oil levels visually.

A Buchholz relay’s switches can handle alternating current (AC) or direct current (DC) voltages ranging from 24 to 250 volts, and the relay’s insulation can withstand 2,000-volt charges. The insulating oil is commonly a silicon-based fluorinated hydrocarbon compound with a functional temperature range of 77° to 239° Fahrenheit (25° to 115° Celsius) or a kind of mineral oil stable at high temperatures.

The fault levels in the transformer are gauged by a series of oil floats in a Buchholz relay. Minor electrical problems cause a small quantity of gas to build up in the oil, causing an upper float to shift and the relay to activate an external alarm. When the rising gas rotates a flap on the larger, lower float from large-scale faults, a tripping switch in the Buchholz relay is activated, and the relay cuts power to the transformer.

Once the cause of error has been identified  and repaired, an external button on the device allows the system to be reset. The minor float assembly activates the alarm if the transformer suffers a tiny oil leak or a small amount of air enters the unit. The tripping switch is tripped by the larger float when leaks become considerable and the system is shut down.

Instead of a floating device, the lower assembly could have a mercury switch coupled to the rotating flap. Some units also contain test cocks, which feed air through the system and measure its response to see if the floats and mercury switches are working properly. To give the Buchholz relay greater strength and longevity, it is frequently installed on a heavy-duty cast iron plate, and the terminals are insulated with ceramics.

The Buchholz relay is fairly simple to use. The fault currents produce heat whenever a tiny fault develops inside the transformer. Gas bubbles are formed as the transformer oil decomposes. Through the pipeline, these gas bubbles travel towards the conservatory. These gas bubbles collect in the relay chamber, displacing an amount of oil equal to the volume of gas collected. Oil displacements tilt the hinged float at the chamber’s top, causing the mercury switch to close the alarm circuit’s contacts. 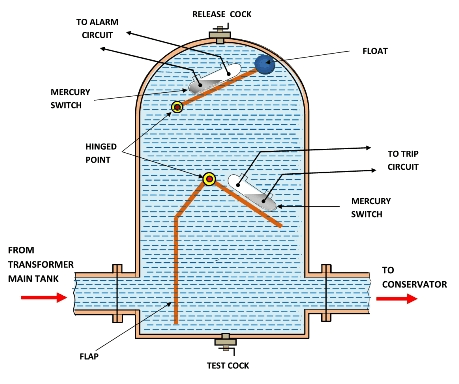 The amount of gas gathered can be seen through glass built into the chamber’s walls. Gas samples are collected and evaluated. The amount of gas shows the severity of the problem, while the gas color reveals the type of fault that occurred. The float at the bottom of the chamber is unaffected by minor flaws since the gases produced are insufficient to activate it.

When severe faults occur, such as phase-to-earth faults and tap changing gear faults, a substantial amount of gas is released, the float at the bottom of the chamber is tilted, and the trip circuit is closed. This trip circuit activates the circuit breaker while also isolating the transformer.

The architecture of such devices is robust, allowing them to endure large electrical currents and changing weather conditions. The dome-shaped housing is made of weatherproof aluminum. It includes mechanical test and trip circuit controls and a tempered glass inspection window to monitor insulating oil levels visually.

A Buchholz relay’s switches can handle voltages ranging from 24 to 250 volts of alternating current (AC) or direct current (DC), and the relay’s insulation can withstand 2,000-volt charges. The insulating oil is either high-temperature stable mineral oil or silicon-based fluorinated hydrocarbon compounds with a functional temperature range of 77° to 239° Fahrenheit (25° to 115° Celsius).

How does  Buchholz Relay function

When the mercury switch inside the metallic chamber is tripped, the relay sends an alert signal to the employees. When the transformer’s supply runs out, it is disconnected from the system for maintenance. The test cock on the relay is used to release the pressure in the chamber.

The lower mercury switch inside the metallic chamber gets slightly slanted when a serious fault develops inside the transformer, closing the tripping circuit. As a result, the transformer is cut off from the main circuit.

Buchholz relay was invented by Max Buchholz in 1921 and is named after him. A relay is a security device used in electrical transmission networks like distribution and transmission.

Lastly, if you got any other questions about buchholz or planning to purchase any other electrical component, contact us at ICRFQ. We are the best electrical manufacturer in China.