Can a Circuit Breaker Fail Without Tripping? Best Answer 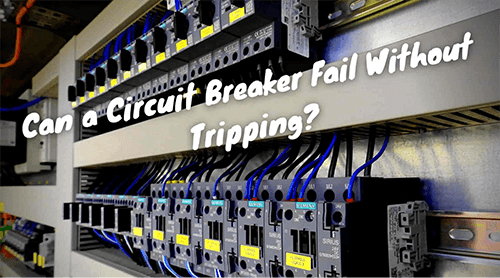 Take a moment to picture yourself watching the game on your brand-new ultra-HD television while unwinding home on a nice summer day. Your television, lights, and air conditioner are abruptly turned off, almost precisely timed with significant gameplay. You hurriedly dash to your breaker box and turn on the power because electricity is still in other parts of your house. You are disappointed to find that the circuit breaker didn’t even tripped. You’re so angry that you start sweating and wonder if your circuit breaker is broken.

If a circuit breaker breaks without tripping, it must be replaced. It might also indicate wiring issues with the circuit, such as loose or overheating, exposed wiring, or unregulated voltage. The switch may be mechanically locked in the “on” position. In this case, the problem is entirely mechanical. Finding the exact issue is challenging and, in every case, necessitates a diagnosis from a qualified electrician.

It is frustrating every time the electricity goes out in your house. Especially during the sweltering summer when you depend on your air conditioner to keep your home cool. If your circuit breaker has stopped working without tripping, troubleshooting may be able to tell you why it stopped working in the first place. This comprehensive article explains why circuit breakers fail and how to know if yours did.

Why Do Circuit Breakers Trip?

Your home’s circuits are protected by circuit breakers, which serve as a safety valve. As modern gadgets have grown more power-hungry, circuits have gotten overburdened.

Short circuit risk increases if electricity is allowed to continue flowing via these overloaded circuits. Electric fires and shocks are most frequently caused by short circuits, which can also be lethal.

The breaker box will protect your appliances from defective wiring or current. The circuit breaker will trip promptly upon detecting an electrical overload, cutting off the flow of electricity through that specific circuit.

A circuit breaker that trips is operating properly. Therefore, if your breaker box does trip right away when you plug in an appliance, the circuit breaker panel is functioning as it should. Circuit overloads are rather typical, especially after home improvements.

Homeowners install several plugs and new electrical components without considering the possibility that the increased power flowing could cause problems with the electrical system.

How Can a Circuit Breaker Fail Without Tripping?

By allowing more energy to pass through the circuit, the breaker causes it to heat up rather than a trip to break the connection.

An electrical system can frequently operate at a significantly higher capacity while a breaker is malfunctioning, which raises the danger of fires and other major electrical problems. Unexpectedly, circuit breakers require a minimum voltage to operate properly. For instance, a single-pole breaker requires at least 120 V, and a double-pole breaker requires at least 240 V on an electrical panel. Without this minimal voltage, the breaker box may malfunction and go bad, creating electrical problems and serious fire threats.

What Could Be Causing Circuit Breaker Fail Without Tripping?

When a circuit breaker malfunctions, there are common symptoms to look for. While some are straightforward, others are more nuanced and need some investigation. We talk about the typical signs of a failed circuit breaker.

The breaker is typically faulty or overloaded when regularly trips for no apparent cause. If unplugging electronics from the circuit and reducing the electrical load doesn’t stop the frequent trips, the breaker is almost certainly faulty.

If you find that your circuit breaker is overloaded, speak with an electrician about increasing the breaker size so that it can power additional devices and appliances without tripping.

The Breaker Appears Damaged or Burned 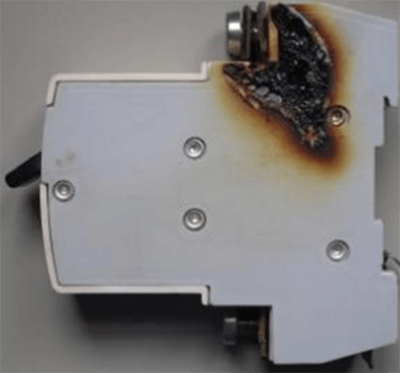 Change your breaker immediately if it has already burned due to its warmth. As soon as you approach the location of your load center, you might notice this. You’ll smell burning or, even worse, see smoke emanating from the box. The breaker will exhibit scorched or melted portions when this occurs. In addition, the CB is currently hot to the touch, so keep your distance and shut off the main breaker as soon as possible. Please be aware that a breaker should never feel warm while operating normally.

Overheating is what caused this circuit breaker combustion. The power supply will keep feeding the wiring when a circuit overloads and the breaker misses the problem. Eventually, the wiring will burn away. When a circuit breaker malfunctions without tripping, the worst-case situation is that it burns. In this situation, seeking professional help is strongly encouraged. An expert electrician will perform the necessary servicing; particularly if there is smoke, it might necessitate more than just a CB change.

Under normal use, the circuit breaker shouldn’t ever feel warm. The breaker may feel a little warmer if your house is cold, but it will never be hot to the touch. Turn off all power with the main breaker if your breaker is too hot to touch, and then call an electrician immediately for assistance. It is crucial to inspect and fix hot breakers right away because they have the potential to create fires.

All residents should exit the house as soon as smoke is detected from your breaker box and phone emergency authorities.

You’ll probably predict this, but a burning smell nearly always indicates that something has burned or is burning. They might flare up, burn wire insulation, and melt the plastic around them, causing everything from wires to short out to circuit breakers to fail without tripping.

The plastic parts and wire insulation of circuit breakers are always constructed from self-extinguishing materials. However, there is always a risk of fire if you smell burning. Therefore, call an electrician for assistance whenever you smell burning from your circuit breaker (especially if it is malfunctioning without tripping). Also, if you observe smoke or fire, be prepared to leave your house and dial 911.

Breaker Fails In “On” Position?

You can try turning the breaker off and back on if it fails without tripping. This only partially resolves the issue with the malfunctioning circuit breaker. Either the wiring is defective, or the breaker has failed.

The Switch Is Stuck?

On the other hand, the latch may be the issue if there are no scorched patches close to your circuit breaker.

To determine why the breaker doesn’t trip but no power flows through its circuits, your electrician should remove the troublesome CB from its socket and investigate the issue. I advise against performing this technique because it will only require the equipment and skills of a contractor.

You have one defective circuit breaker, the main issue resulting from the previously mentioned issues.

Replace your circuit breaker immediately if it exhibits any of the issues above. Don’t wait until things turn ugly and start a fire in your home. Purchasing a more expensive CB that offers high quality is preferable to using the old, defective ones.

What Reasons Are Behind a Circuit Breaker Trip?

Circuit breakers are made to trip to safeguard your property when certain conditions are met, such as an electrical surge. Overloads, Short circuits, and ground faults are the three most typical causes of a circuit breaker trip.

When an exposed wire touches a grounded component, a ground fault happens. When this occurs, a significant current (amps) is drawn through the wire and ground. The circuit breaker will trip when much electricity goes to the ground because more amps are drawn through it than it can handle.

Consider ground faults as a defense system for your house. Electrical fires may result from a significant amount of current grounding through a ground wire, junction box, or the grounded frame of an appliance if the circuit breaker doesn’t trip.

The National Electrical Code (NEC) mandates that all outlets near water sources, including kitchens, baths, basements, and external outlets, have built-in Ground Fault Circuit Interrupters (GFCIs). The built-in circuit breakers in GFCI outlets are designed to trip instantly in the event of a ground fault.

Your circuit breaker will rarely fail open if you repeatedly ground fault it. The possibility is risky, though. Contact an electrician if you think this is the case.

The most frequent cause of breakers tripping in homes is overloading the circuit. A circuit breaker may fail open due to repetitive circuit overload, just like ground faults. If you frequently overload your circuit, have an electrician replace the breaker with one that is larger or avoid using all of your appliances at once.

A short circuit results when the hot (active) and the neutral wire come into contact. This contact may happen if the insulation on both wires has worn away, exposing the internal cooper, or if the terminals are incorrectly connected. A hot wire and an exposed neutral wire touching one other produce popping sounds, sparks, and smoke and overload the breaker, causing it to trip.

A certified electrician should be the sole person to mend the wires creating the issue as this is part of repairing a short circuit.

For more details on circuit breakers and the best one to use, contact us at ICRFQ. We manufacturer the best electrical components in China.