Cathode vs Anode: What’s the Difference 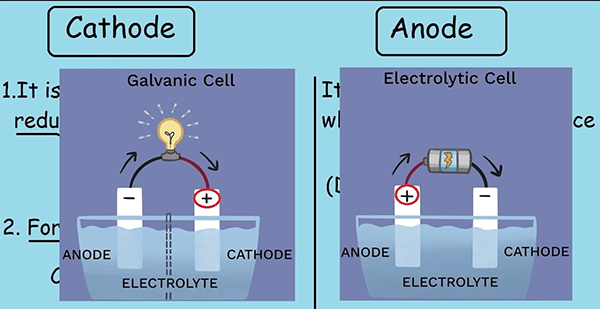 Electrodes having opposing polarity are known as anodes and cathodes. To understand the distinction between anode and cathode, we must first comprehend what they are. Anodes and cathodes are utilized to conduct electric current into and out of any device that runs on electricity. A conducting material that permits current to travel through it is known as an electrode. Metals such as copper, nickel, zinc, and other metals are commonly used as electrodes; however, non-metals such as carbon can also be used. Furthermore, by sending current through it, an electrode completes a circuit.

What is an Electrode?

An electrode is a critical component of an electrochemical cell that comes into contact with electrolytes. The current enters and exits the electrolyte via the electrode, which acts as a metallic contact. It is defined as a surface on which a redox reaction occurs between the metal and the solution.

The anode is the electrode where the cell’s current leaves and oxidation occurs. The positive electrode is another name for it.

Anode, cathode, and electrolyte are the three essential components of a simple battery. Traditionally, the electrodes have been located at the battery’s ends. When these ends are connected to electricity, a chemical reaction occurs inside the battery. Electrons become disorganized and must rearrange.

They resist each other and flow with fewer electrons towards the cathode. Electrons are balanced throughout the solution due to this (electrolyte). 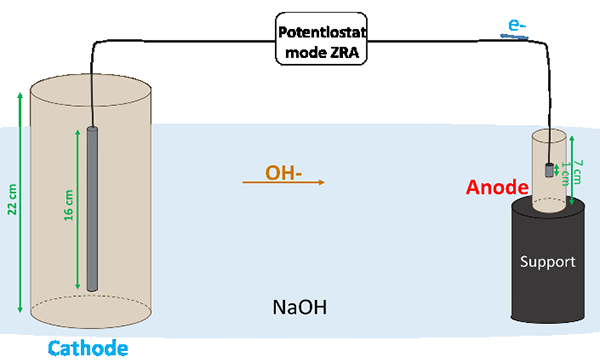 How Does an Anode Work?

An anode is an oxidizing metal that loses electrons, such as zinc or lithium. It floats in an electrolyte solution and slowly erodes when electrons pass through it on their way to the cathode. The conductor (whether it’s a metal wire or a tube) is how we get access to the electricity generated by the anode and how a battery finally powers our devices. The battery will die once the anode has entirely eroded (or lost charge).

Anodes can be manufactured from a number of different materials. Examples include zinc, lithium, graphite, and platinum.

A good anode should be an efficient, reducing agent with high electrical energy output, strong conductivity, and stability.

A cathode is a negatively charged electron-flowing electrode inside a galvanic or electrolytic cell. Despite having a negative charge, the cathode is nearly always called the positive electrode.

The electrons go from the negatively charged zinc molecules to the positively charged manganese in a zinc-manganese dioxide battery, a domestic battery’s most common chemical design.

The manganese dioxide side of the battery serves as our cathode. As the battery “charge” is used up, the zinc ions become positively charged cations attracted to the cathode end of the battery and migrate across.

It’s worth noting that the anode and cathode changes stop in some cases, such as while charging a battery. The positive end of the cell’s electrons is consumed, reducing the quantity of electrons as they move away, indicating that this end is now the anode.

How Does a Cathode Work?

An anode sends electrons to a cathode, which receives them. Electricity goes from the negative to the positive parts of your battery via the conductor, which is submerged in an electrolyte solution. This is how a battery produces electricity, in summary.

Any material can be used as a cathode as long as it is an effective oxidizer that is stable when in contact with an electrolyte. Because of their high operating voltage, metallic oxides are excellent cathode materials. These include a copper oxide, lithium oxide, and graphic oxide.

Why is it important to understand the difference between an anode and a cathode in a battery?

Understanding the anode vs. cathode distinction is vital since it allows you to grasp exactly how your batteries work, whether you’re on a boat, driving a recreational vehicle, or simply changing the batteries in your remote. You’ll be confident in your abilities to properly install your device’s powerhouse, whether you’re installing your solar setup or replacing your batteries.

When jump-starting an automobile, it’s also beneficial. Do you ever get stuck figuring out where the booster cable clamps should be attached? You now know which goes on the negative end (anode) and which goes on the positive end (Cathode) (the cathode).

Main Differences Between Cathode and Anode

Electrons enter an electrical cell or system via the cathode electrode and exit via the anode electrode. Under certain conditions, such as when the battery is recharging, these will move to a new position.

The anions produced by the movement of electrons in the electrical cell (discharging) will be attracted to the cell’s anode end. On the other hand, the cations will be drawn to the cathode end.

The flow of electrons into the cathode is referred to as reduction because it results in a negative charge and a decrease in the oxidation number of the molecule. The process of oxidation produces a positive charge as the electrons leave.

We shall notice the generation of electrons at the cathode end during charging due to the oxidation of the anode material. However, we will see electron uptake and reduction at the anode end.

Anodes and cathodes are used in a variety of other applications.

There are applications where they are not used together, in addition to when they are used together. The sacrificial anode coating, which is usually zinc and intended to safeguard metals, is a good example. This frequently happens on ships, where the movement of water causes a static charge. This charge is absorbed by the sacrificial anode, which eventually disintegrates. The underlying metal is not affected in this way, and only the coating needs to be maintained on a regular basis.

Anodes can also be found in domestic appliances. Sacrificial anode rods in water heaters help to lengthen the unit’s life. The anode rod, in essence, draws minerals in the water and erodes the tank instead of the tank itself. As a result, the term “sacrificial” was coined.

Anodes can also assist in preventing fluid tanks and pipes from corrosion, with the cathode constantly being protected (i.e., the vital material that manufacturers want to preserve).

Electrochemists use cathode and anode to classify electrodes inside an electrical cell, which helps them understand what and where electrochemical processes occur. The terminologies can be confusing since their locations within the same cell might alter depending on whether the cell is being used to power a device or recharged.

The essential takeaway from all of this is that electrons flow into the cathode electrode and out of the anode electrode of an electrical cell. It’s also worth noting that their placements within a cell aren’t fixed and can shift depending on what’s happening in the rest of the cell.