CR1632 and DL2032 batteries that are round, flat, and resemble small silver buttons appear the same. Can they be used universally because they all look the same?

This article will answer your questions and demonstrate their similarities, differences, and interchangeability.

What does CR stand for on a battery? 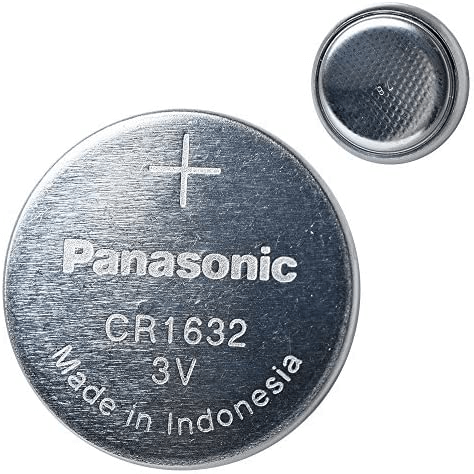 The CR1632 battery provides a consistent voltage flow while remaining lightweight enough for travel and storage. These batteries were designed with performance in mind, providing the long-lasting power you need to keep all of your gadgets running. These batteries can be found in various devices, including calculators, cameras, heart rate monitors, and even toys, and can operate in a wide range of temperatures. The CR1632 is a battery that provides reliable power for your smallest electrical gadgets, thanks to its long shelf life and high storage capacity.

How to Calculate Run Time of CR1632

In that situation, our battery has a capacity of 130mAh. This indicates that if we drain 130 milliamps, our battery will last an hour, and if we draw 65 milliamps, the battery will last two hours. However, because these batteries are designed for a low output current, if our load draws only 0.19mA, the battery should last for (130/0.19) 684 hours. This statistic will not be correct due to the system’s fluctuating current and operating temperature.

The battery’s internal resistance is another crucial factor when choosing a battery. Unfortunately, every battery has some internal resistance, which prevents you from drawing the full electricity from it. The greater the IR of the battery as it ages or as a result of its operational environment, the more current you will be able to draw from it, and the better the battery’s performance will be. The lower the IR of the battery, the more current you will draw from it and the higher the battery’s performance.

Compared to other batteries, the CR2032 coin cell battery has a high energy density and can work reliably in harsh temperatures (ranging from 85°C to -30°C). It has a manganese dioxide lithium chemistry, a voltage of 3 volts, and a capacity of 225 mAh. It is 20 mm in diameter and 3.2 mm in height. In addition, this battery discharges uniformly and has good leakage resistance. CR2032 batteries have been shown to deliver a consistent power source for a long time, far longer than a standard dry battery.

The most common battery coin is the CR2032 battery, which provides long-lasting, dependable power for various applications. They’re used to power small electronics like calculators, wristwatches, medical devices, workout equipment, and toys, among other things. When it comes to CR2032 run life, how long should a 2032 battery last? A standard LED, for example, consumes roughly 20mA, while a CR2032 Coin Cell has a capacity of 200mAh.

They are not the same size. The CR2032 has a 20mm diameter, while the CR1632 has a 16mm diameter. These batteries must be supplied with a unique battery seat that can only install a fixed-size battery if you wish to install them (model). As a result, they are unable to exchange.

Keep out of children’s reach. Swallowing can cause significant harm or death in as little as 2 hours due to chemical burns and the possibility of esophageal perforation. If you swallow something, get to a hospital emergency room until you’re ready to use the product; keep it in its original package. Dispose of used batteries as soon as possible.

There’s a chance of getting hurt if there’s a fire, an explosion, or a leak. It is forbidden to disassemble, charge, crush, or expose to fire or high temperatures.

The CR1632 battery is very similar to the CR2032 or CR2025 batteries; however, their size prevents them from interchanging.

Is there a battery I may use instead of the CR1632?

How Long Do CR2032 Batteries Last?

Material quality, storage circumstances, storage time, humidity, physical damage, and temperature are all factors that affect battery storage life. A battery composed of high-quality materials, stored in a climate-controlled and dry environment, and free of physical damage would be ideal.

Energizer says that their lithium coin cell batteries can last up to ten years when correctly stored. In terms of service life, it will be highly dependent on the application. Because the use of a CR2032 battery in a car key fob is relatively intermittent, it can survive up to 4-5 years before it needs to be replaced. A more active device, such as Apple’s new Air Tag, which allows for continuous item tracking, will only last roughly a year.

Is there a substitute for the CR2032 battery?

The CR2025 battery is a very common lithium coin cell battery used in exact quantities and for the same purposes as the CR2032. The CR2025 is marginally more suited for goods with limited mounting space than the CR2032.

What does CR stand for in the CR2032 battery?

Chromium is also used in lithium batteries, so they are sometimes known as CR batteries. Most people associate CR with the button or coin batteries; however, it is a Chromium chemical identification.

Small and discreet security sensors that use coin batteries like the CR2430 are standard. The CR2430 cells, however, are wider than the CR2025 and CR2032 batteries; therefore, they cannot be used interchangeably.

Is it possible to use a CR2025 battery instead of a CR2032 battery? The CR2025 and CR2032 can be used interchangeably as long as they fit in the battery box, though the CR2032 will probably last slightly longer simply because it has a bigger capacity (mAh).

A CR2016, for example, has the same diameter and voltage as a CR2032 but is half as tall and may not fit firmly into the device you’re trying to power. A CR1632 battery has the same height and voltage as a CR2032, but its diameter is 4mm too small to safely fit in the same device. Understanding the characteristics of your device’s battery is critical if you want to get the most out of it.

Is it possible to interchange CR2032 and CR2025 batteries?

Both the CR2025 and the CR2032 are 3V button cells with equal diameters. However, 2032 is 3.2mm thicker than 2025, which is 2.5mm thicker. With a difference of only 0.7mm, they can be used interchangeably with minimal consequence as long as they both fit in the battery compartment.

We hope this detailed post has answered all of your questions and explained how they are similar and different in specific areas while also demonstrating how they may be used interchangeably.

For more details on CR1632 OR CR2032, ICRFQ is the company to contact. Contact us today and we will sell you the best electrical components in China.