How Many Watts on a 15 Amp Breaker? 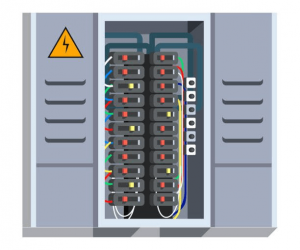 Are you going to utilize a 15A breaker, but you have no idea how much power it can handle? It is capable of simultaneously managing lights and other electrical equipment, but it must, of course, conform to the breaker boundary. Amperes or watts are the units used by manufacturers to mark electrical appliances.

To properly set a limit, you must know how many watts a circuit breaker rated at 15 amps can handle. You may solve this problem using elementary mathematical concepts. Your maximum wattage can be calculated as follows: multiply the breaker’s ampere rating by the circuit’s voltage. Regardless of the circuit breaker’s wattage, certain restrictions must be observed at all times.

Why can’t the breaker handle the total wattage?

Before it trips, a breaker can tolerate a certain amount of wattage. If you have a circuit breaker rated for 15 amps and you only draw a power rating of 12.5 amps, then your breaker won’t trip because 12.5 amps are less than the circuit’s maximum capacity. The industry standard for breakers is 80 percent, even though they can have a temperature rating of 100 percent. Breakers can have either rating.

The circuit breaker would trip if you tried to draw 20 amps of power from it because it was not designed to be able to handle that much current all at once..

Take, for instance, a circuit rated at 15 amps, from which you continuously drew 20 amps. As your device tried to force more water through a pipe with a hole in it, the wire that connected it to the breaker would get hotter and hotter (the breaker’s duty is basically to regulate the amount of electricity going through). This additional heat threatens public safety, as it may result in shocks or, even worse, an electric fire.

How many appliances can be on a 15-amp circuit?

It is essential to determine the maximum number of appliances plugged into a single circuit simultaneously without the risk of starting a fire or tripping the circuit breaker when selecting the appropriate size of circuit breaker installed in your house.

That’s a thought-provoking question, for sure. It depends on the distance between appliances, appliance wattage, receptacles, and wire type.

We will need to use Ohm’s Law and the equation Amperage (A) x Volts (V) = Watts to convert 15 amps to watts (W). You will need a firm grasp of the distinctions between these three electrical units.

Amperes, also known as amps, are units of measurement that indicate the amount of current that flows through a circuit in one second. Volts, on the other hand, are units used to measure the amount of potential or force that electrons are exposed to. The total amount of electrical energy is measured in watts, a product of amps and volts.

Bring out your pen and paper because with a quick conversion, you’ll be able to figure out how many watts a circuit breaker that handles 15 amps can take. For instance, a circuit breaker rated at 15 amps is compatible with a 120-volt system. Applying the equation from up above, we get the following result: 15 amps times 120 volts equals 1800 watts.

How Many Watts Can Be Passed Through a Breaker That Is Rated at 15 Amps?

Two factors will determine how many watts you can connect to a circuit with a breaker rated for 15 amps.

First, we will examine the relationship between the units. Then we will calculate the total number of watts a circuit breaker rated at 15 amps can support in theory.

An appliance’s wattage affects how much current it draws from the circuit. Watts are determined by current, measured in amps, and circuit voltage.

A simple formula can be used to explain the connection.

You can use any mathematical equation to determine the missing value if you already know some of the values. In most houses, the voltage is predetermined; it will either be 120 or 240 volts. We need to rearrange the values so that the equation focuses on our unidentified unit, watts. This can be accomplished by following the steps shown below.

By lugging our known values into the equation, we can determine the maximum watts the 15-amp circuit breaker can support.

This figure, 1800 watts, is the maximum energy the circuit breaker can tolerate before it trips. Although this is the maximum, another component must be considered: the proper wattage, which the NEC specifies as the maximum wattage that can be used on a circuit with 15 amps.

If you routinely overload a circuit beyond its maximum wattage capability, a sudden surge in current use caused by the startup of an appliance will trip the circuit breaker. Running the circuit at full load all the time may cause the wire in the circuit to heat up, which presents a possible threat to public health and safety.

If the wires in the circuit get too hot, the insulation that surrounds the wires might melt, which creates a dangerous short circuit that has the potential to start a fire or electrocute someone.

Using this limitation, we can arrive at a conclusive estimate of the amount of wattage that can be safely operated on a circuit with 15 amps.

It is crucial to distinguish between the watts that a circuit breaker rated at 15 amps is capable of handling and the watts that can be connected to the same breaker securely.

The 15-amp breaker we use has a capability of up to 1800 watts, but the National Electrical Code states that the greatest power it can safely handle is 1440 watts. In our specific configuration, this means that we cannot use it. If you desire more watts, you will be required to replace your breaker; this, of course, is predicated on the assumption that the wiring in your home is large enough to support the increase.

The maximum amount of power (measured in watts) that can pass through a circuit breaker with a 15 amp rating is 1440 watts, as we’ve seen. Now that we know this, we can calculate the maximum number of 100-watt light bulbs that can be connected to the circuit without exceeding it.

According to our findings, a 15-amp circuit breaker can accommodate a maximum of 14 100-watt light bulbs.

The wattage of the light bulbs can also be converted to amps to answer the problem. The circuit breaker’s maximum amperage capability is 15 amps, but the NEC only permits a maximum of 12 amps or 80% of this capacity.

Using the equation from before, we are able to determine the number of amps that are required by each light bulb.

According to this result, the current drawn by each light bulb with 100 watts will be 0.833 amps. We can now apply for this computed number in the highest load we can put through the breaker rated for 15 amps, which is 12 amps.

It is worthwhile to use circuit breakers with a lesser amperage rating, such as the 15-ampers you have, provided that you install all of your equipment correctly and stay within their limits. Find out how many watts a circuit breaker with a rating of 15 amps can safely take before you attempt to connect any electronic device to your circuit. This should be done before you ever try to connect any electronic devices to your circuit.

The breaker’s amperage should be raised to 15 A by increasing the device’s voltage. Because the circuit breaker will always trip if the maximum wattage is exceeded, you should make it your mission to prevent yourself from ever reaching that point. Consider the entire load that can be applied constantly and ensure you don’t utilize more than 80 percent of the circuit breaker’s maximum capacity at any given time.