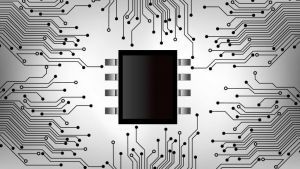 While silicon is the most common semiconductor material in electronics, other materials such as germanium, gallium arsenide, silicon carbide, and organic semiconductors are also employed. Each material has its benefits: cost-to-performance, high-speed operation, high-temperature tolerance, or the required signal response. In this post, we will discuss how semiconductors function.

What Is a Semiconductor? 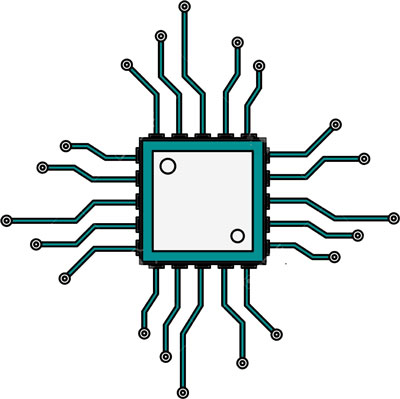 A semiconductor is a silicon-based material that conducts electricity more efficiently than an insulator such as glass, but not as well as a pure conductor such as copper or aluminum. Doping, or the introduction of impurities, can change the conductivity and other properties of a material to suit the needs of the electronic component in which it is employed.

What makes a semiconductor so special?

Another fascinating feature of a semiconductor is that current is carried not only by electrons but also by the holes left behind by electrons. The holes left in the valence band can be inhabited by electrons from lower states, contributing to current flow, leaving a hole in these deeper states, which will be occupied by electrons beneath, and so on. The rate of passage of these ‘positive’ charges can thus be characterized as the current.

Doping and the Use of a Device to Control Current

To comprehend its utility, one must understand that, unlike a conductor, the current passing through a semiconductor is a delicate combination of charges and their continuous flow rather than an unregulated surge of electrons. Innovative engineering suggested the idea of deliberately contaminating a silicon or germanium atom to induce new energy levels.

Crystals having more valence electrons than a semiconductor (typically phosphorus) tend to roam freely in the structure and contribute to the flow of electricity, whereas crystals with fewer electrons (aluminum) borrow electrons from silicon and leave extra holes. The phosphorus-contaminated silicon is known as an ‘n-type semiconductor, while the silicon produced by the latter technique is known as a ‘p-type semiconductor. The quantity of contamination or doping can control the current. 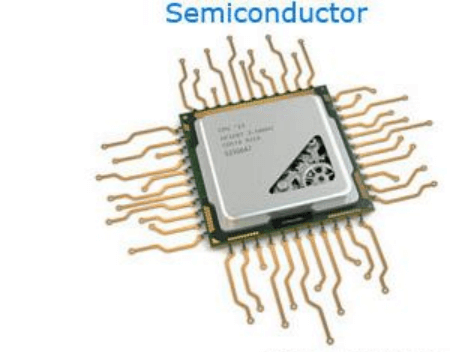 A diode is the most basic semiconductor device, making it a good place to learn about semiconductors. This article will explain what a semiconductor is, how doping works, and how semiconductors can be used to make a diode. But first, let’s look at silicon in detail.

Silicon is a highly common element; it is the major component of sand and quartz. When looking up “silicon” in the periodic table, it is found next to aluminum, below carbon, and above germanium. Carbon, silicon, and germanium (which, like silicon, is also a semiconductor) all have four electrons in their outer orbitals. This enables them to grow beautiful crystals. A lattice is formed when four electrons make perfect covalent connections with four nearby atoms. Diamond is crystalline carbon in its purest form. Silicon in its crystalline form has a silvery, metallic appearance.

Because metals frequently have “free electrons” that can easily move between atoms, they are good conductors of electricity. While silicon crystals appear to be metals, they are not. The outer electrons in a silicon crystal are all bound in perfect covalent bonds and cannot move. A pure silicon crystal is nearly an insulator, allowing only a little amount of electricity to pass through it. However, all of this can be altered through a procedure known as doping.

Doping silicon changes its behavior and turns it into a conductor. Doping is the process of mixing a small amount of an impurity into a silicon crystal. Impurities are classified into two groups:

In N-type doping, tiny amounts of phosphorus or arsenic are introduced to the silicon. Because phosphorus and arsenic have five outer electrons apiece, they are out of place in the silicon lattice. Because the fifth electron has nothing to connect to, it can travel about freely. To generate enough free electrons for an electric current to flow, only a small amount of the impurity is needed.

Silicon of the N-type is a good conductor. The name N-type comes from the fact that electrons have a negative charge.

In P-type doping, the dopant is borax or gallium. The outer electrons of boron and gallium are the same. When mixed in, they create “holes” in the silicon lattice where a silicon electron has nowhere to attach. The absence of electrons results in a positive charge, hence the P-type classification. Current flows through the holes. A hole moves across space by accepting an electron from a neighbor. P-type silicon has great conductivity.

A good insulator is transformed into a workable (but not great) conductor by a little amount of N-type or P-type doping, hence the term “semiconductor.” On their own, N-type and P-type silicon aren’t very remarkable, but when combined, they generate some truly bizarre behavior at the junction. This is what happens in a diode. The simplest basic semiconductor device is the diode.

Current can flow in one direction but not the other through a diode. You may have seen turnstiles at a stadium or a metro station that only allow people to go one way. A diode is a one-way electron turnstile. When N-type and P-type silicon are combined, as depicted in this diagram, an unusual event occurs, which gives a diode its distinct features. Despite the fact that N-type and P-type silicon are both conductors, the combination indicated in the diagram does not carry electricity.

A diode is a device that stops current in one direction while allowing it to flow in the opposite direction. Diodes can be utilized in a variety of applications. A diode, for example, is commonly found in battery-powered devices to safeguard them from being inserted incorrectly. When the diode is flipped, it merely prevents any electricity from exiting the battery, protecting the device’s delicate circuitry.

An ideal diode blocks all current when reverse-biased. An actual diode allows about ten microamps to pass through it, which isn’t much, but it’s still not ideal. When enough reverse voltage (V) is applied, the junction collapses, and the current can flow through. The breakdown voltage is usually much higher than the circuit will ever see; thus, it’s a moot point.

The transistor is another significant technology associated with the diode. A lot of similarities exist between transistors and diodes.

A transistor has three layers rather than the two layers seen in a diode.

You can make an NPN or a PNP sandwich. A transistor serves as both a switch and an amplifier.

Because of the logical evolution from silicon to doped silicon to transistors to chips, microprocessors and other electronic devices have become so cheap and prevalent in today’s society. The fundamental ideas are quite simple. The miracle is that those concepts have been improved to the point where tens of millions of transistors can now be produced for a low cost on a single chip.

Memory chips serve as temporary data storage and data transmission between the brains of computer devices. The memory market continues to consolidate, reducing memory prices so low that only a few titans such as Toshiba, Samsung, and NEC can afford to stay in the game.

These central processing units house the core logic that allows tasks to be completed. With the exception of Advanced Micro Devices, Intel’s microprocessor dominance has forced practically every other competitor out of the mainstream market and into smaller niches or different segments altogether.

Sometimes known as “regular chips,” these chips are made in large batches for normal processing. This industry, which giant Asian chip manufacturers dominate, has razor-thin profit margins that only the largest semiconductor companies can compete for.

The construction of an integrated circuit chip with the capabilities of a whole system is what “System on a Chip” is all about. The market is centered on the rising demand for consumer items that mix new features with cheaper prices. With the markets for memory, microprocessors, and commodity integrated circuits closed, the SOC segment is perhaps the only one with adequate room for diverse enterprises.

What Is the Difference Between a Semiconductor and an Insulator, Conductor?

What Is an N-Type Semiconductor?

An n-type semiconductor is mixed with pentavalent impure atoms such as phosphorus, arsenic, antimony, and bismuth.

What Is a P-Type Semiconductor?

A p-type semiconductor is an extrinsic semiconductor that contains trivalent impurities like boron and aluminum, which boost the conductivity of a conventional silicon-based semiconductor.

Is silicon a semiconductor?

Yes, silicon is used to make most semiconductor chips and transistors, as it is the preferred raw material due to its stable structure.

What are semiconductors used for?

Electronic devices rely heavily on semiconductors, such as chips, diodes, transistors, and integrated circuits. Semiconductors are used in everything that is computerized or uses radio waves.

What elements are used in semiconductors?

Semiconductors can be pure elements such as silicon, carbon, and germanium, or conductors doped with phosphorus or arsenic (N-type doping), boron, or gallium (B-type doping) (P-type doping).

What Is an Intrinsic Semiconductor?

Lastly if you need to purchase semiconductors or other electrical components, at ICRFQ, we manufacture the best in China; contact us today.