Everything You Need to Know About Ice Cube Relays 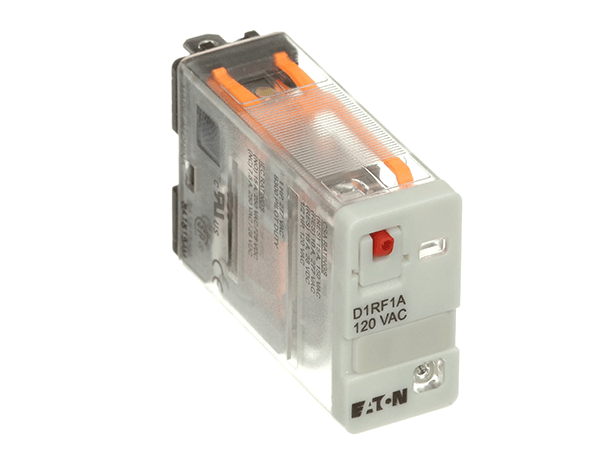 An electromechanical relay is an electrical switch using an electromagnet coil as its actuator. They have a basic “on” and “off” behavior as switching devices, with no intermediate states. A coil of wire wound around a laminated iron core provides the magnetic field required to trigger the switch mechanism.

What is the function of an Ice Cube Relay?

So, what exactly is a relay control?

A control (ice cube) relay is an electrical component that opens or closes a switch to allow current to pass through a conducting coil that is not directly in touch with the switch. Control relays are electromagnetic devices that regulate the flow of electricity in circuits.

What’s more, how do 8-pin relays function? The electromagnetic force is used to operate the relay. The coil becomes magnetic when it is powered. There are two common contacts, two normally open contacts, and two normally closed contacts in an 8-pin relay (as depicted above). There are three of each of those as mentioned above in an 11 pin relay.

How does a relay socket function, in simple terms?

Electromechanical switches in which the flow of electricity in one circuit is controlled by the variation of current in another circuit are accepted by relay sockets. Terminal type, number of pins per blade, and socket receptacle style vary amongst relay sockets. A terminal terminates a conductor. 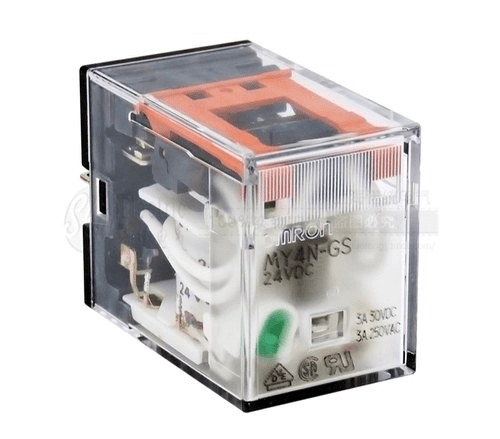 What Is a Relay

Relays are switches used to close and open circuits both electronically and electromechanically. It controls the opening and closing of electrical circuit connections. The relay is not energized with the open contact when the relay contact is open (NO). However, if it is closed (NC), the relay is not energized due to the closed contact. However, when energy (electricity or charge) is supplied, the states are more susceptible to change.

How Does a Relay Work?

Relays come in a variety of sizes, capacities, and applications. Regardless of how they differ in these areas, all relays operate similarly: one circuit powers another.

Whether the relay is generally open (NO) or normally closed (NC), the mechanism in which this occurs varies (NC).

The second, more extensive circuit is generally off in most relays.

Power flows through an input circuit in a normally open relay, causing an electromagnet to be activated. This creates a magnetic field that pulls a contact into the bigger circuit, allowing current to flow. When the power supply is disconnected, a spring pulls the contact away from the second circuit, cutting off the energy flow and shutting off the end device.

An NC relay works in the same way as a NO relay in that it has two circuits, one of which is larger, and an electromagnet that moves a physical contact between two locations.

The default states are flipped in the event of an NC relay. The magnets pull the contact away from the second circuit when the first circuit is triggered. As a result, NC relays default to keeping the larger circuit on.

An electromechanical relay is an electrical switch using an electromagnet coil as its actuator. They have a basic “on” and “off” behavior as switching devices, with no intermediate states. An electronic schematic symbol represents a simple single-pole, single-throw (SPST) relay.

A coil of wire looped around a laminated iron core generates the magnetic field required to activate the switch mechanism. This relay has normally open (NO) switch contacts, which means that when the relay coil is de-energized, the switch will be in the open (off) position. The “normal” state of a switch is when it is not being stimulated. When the coil of a relay switch is not electrified, it is in the “normal” state.

An electronic schematic for a single-pole, single-throw relay with a normally-closed (NC) switch contact would look like this: 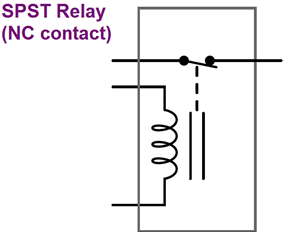 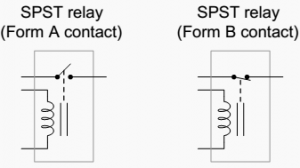 The single-pole, double-throw (SPDT) relay contact, often known as a “Form-C” contact, varies this theme. The magnetic coil actuates this switch, which provides both a normally open and usually closed contact set in one unit: 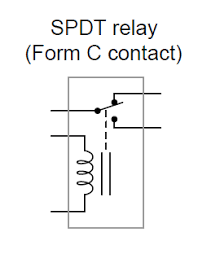 The double-pole, double-throw (DPDT) relay contact is a variation on this concept. This switch has two sets of Form-C contacts in one unit, both of which are triggered by the electromagnet coil at the same time: 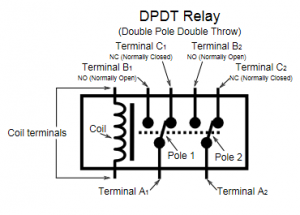 Due to their adaptability, DPDT relays are among the most widely used in the industry. Each Form-C contact set has either normally open or normally closed contacts. The two sets (two “poles”) are electrically isolated, allowing them to be utilized in distinct circuits. The so-called ice cube relay, named for its translucent plastic container that allows inspection of the functional elements, is a popular package for industrial relays.

These relays plug into multi-pin base sockets and can be easily removed and replaced if they fail. In the photos below, a DPDT “ice cube” relay is shown with the plastic cover removed to expose both sets of Form-C contacts, ready to be inserted into its base.

These relays have eight pins that connect to the socket: three for each of the two Form-C contact sets, plus two extra for coil connections. This form of relay base is known as an octal base because of the pin count of eight. A closer look at one Form-C contact reveals how the moving metal “leaf” makes contact with one of two fixed points, with the actual point of touch established by a silver-coated “button” at the leaf’s end.

Connection diagrams are commonly drawn on the exterior shell of industrial control relays to show which pins connect to various parts within the relay. Even between relays with the same function, the style of these schematics may differ slightly.

Remember that, despite changes in physical size and contact ratings, all three relays perform the same basic function (DPDT switching) (voltage and current capacities). Only two schematics utilize the same symbols to denote contacts, while the coil is represented by a different symbol in all three.

What are the two most critical electrical components of a relay or contactor?

There are two circuits in a relay: the energizing and contact circuits. On the energizing side is the coil, and on the contact side is the relay contacts. When the coil of a relay is powered, electricity flows through it, creating a magnetic field.

Can a single relay coil control many relay contacts?

What is an overload relay?

What are the benefits of utilizing a relay versus a switch?

While a relay adds an extra step to the switching process, the key benefit is that you can manage the switching of high-power circuits such as off-road lights or air compressors with a considerably lower amperage circuit that energizes the relays

Does a relay need to be grounded?

If the relay is housed in metal, it may only have ONE coil pin. The second pin, or ground, is the housing, which must be grounded or mounted directly to the chassis. If your relay is housed in a plastic case, it will have two coil pins that are typically reversible.

Where are relays used?

Relays are utilized in a wide range of applications. The contacts can be significant to handle high voltages or high currents, and the relay coil can be controlled by a remote low voltage and current switch. It could be used in a high-power substation to turn on and off a high voltage or current from a distance.

Why is the relay used in PLC?

Relays are used to separate two different voltage levels. While the PLC controls the relay, it is used to energize the starter, which then switches the motor voltage. Relays, which are wired to produce a control sequence, can also be used for simple control schemes when a PLC would be too expensive.

An ice cube relay functions similarly to a standard contactor. In other words, the relay will have a coil, which can be either DC or AC. Typically, it will have several changeover contacts (typically 2 or 4). The NO contacts close, and the NC contacts open when the suitable source powers the coil.