Everything You Should Know About Rheostat 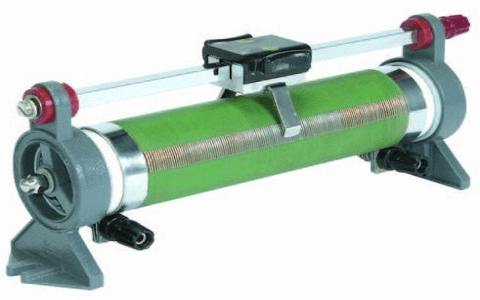 In the field of electronics, there is one category of resistors known as variable resistors. Rheostats fall under this category. They are on many devices as they play various roles.

But before you buy a rheostat for your specific application, it will be wise to get all the information that you need about them. To save you time, we at ICRFQ are compiling and presenting everything you should know about rheostats.

What is a rheostat?

A rheostat is a type of variable resistor used to control the flow of electric current. It is a device that varies the magnitude of an electromotive force (EMF) applied to a circuit, in response to the voltage or power supplied to that circuit. The term rheostat derives from the Greek word “rheos,” meaning flow.

How do Rheostats Work?

The basic working principle of any rheostat is very simple. A rheostat consists of two conducting elements that are separated by an insulating layer.

The value of the voltage at one end is directly proportional to the value of the current at the other end. One end of a rheostat, which is called the wiper, can be moved along the length of its associated arm, while still being in contact with it. This movement causes a change in resistance between both ends of the rheostat.

The resistance offered by a rheostat depends on how far you move its wiper along its arm. You can easily see this if you look at a variable resistor (such as a potentiometer), which works on similar principles.

The working principle of the rheostat can be understood with the help of the following experiment:

Take a piece of copper wire and wrap it around a nail (or any other body). Now, connect one end of it to a 12-volt battery and leave the other end free.

When you touch the free end with your finger, it will get hot. This happens because you have created an EMF between two ends of the wire, by moving your finger along the length of the wire (wiper).

The greater you move your finger, the more current flows through it and more heat is produced.

The heat is proportional to the current flowing through it.

The terminals of the rheostat are connected to the ends of the wire winding.

The movable wiper terminal can be moved along the length of wire winding by means of a slider or knob attached to it. This allows us to vary the resistance offered by it and hence the voltage across it can also be varied.

Design and Dimensions of rheostat

Rheostats are designed to accommodate varying resistances of the wire winding. The design of the rheostat is such that it is easy to adjust the resistance offered by it. The dimensions of the rheostat are as follows:

The frame has a length to accommodate varying resistances. The nominal width (w) and depth (d) are also given so that the frame can accommodate different widths of wire winding.

The movable wiper terminal is attached to the slider or knob of the rheostat. In order to make it move along the length of wire winding, this slider or knob is connected directly or indirectly to a spring-loaded lever.

This lever provides resistance to the movement of the wiper and hence prevents it from being moved too far in one direction. This way the resistance offered by the rheostat is fixed and can be varied by moving the slider or knob.

What materials are used for making rheostats? 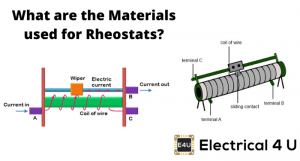 Different components of a rheostat are made of different materials. These are as follows: 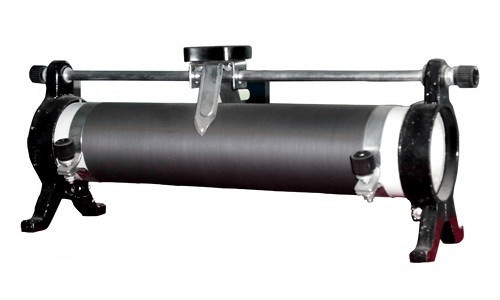 There are different types of rheostats. Let’s have a look at them and by the end of it, you will know which one is perfect for your application. 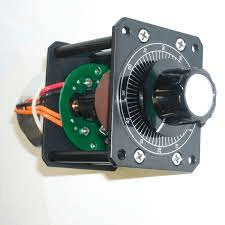 These are the most common types of rheostat. It is a rotary switch that has a slider or knob. It is made up of a frame, wiper terminal, slider or knob, and a rotating shaft.

An SPDT (single pole double throw) rheostat has two switches that are connected in parallel. It has one switch that is used to switch on or off a component and the other switch is used to adjust the position of the component.

These rheostats have two terminals where the wiper can be connected. The two terminals are used to connect two components together to switch them on or off.

The wiper is usually a screw terminal that is used to connect the terminals together.

These are also called cylindrical resistors. This is because they have a cylindrical shape. This type of rheostat has a fixed resistor in it and can be used to adjust the resistance of a component.

Where are rheostats used? Applications

From the working principle, you can easily tell that rheostats have a wide range of applications. Here are some of the uses of rheostats:

-The rheostat is also used in digital integrated circuits. This is because they are often used in high-performance analog and digital circuits, such as high-speed signal processors and micro-controllers.

-The rheostat is also often used in temperature sensing applications, as it can be adjusted to compensate for temperature changes by varying resistance.

-The rheostat is also used in the control of fluorescent lamps. This is because the rheostat can be adjusted to compensate for variations in the current going through a lamp. This means that it can be used to control the brightness of a lamp.

-The rheostat is also used in power factor correction circuits as it can be adjusted to compensate for variations in voltage or current that is applied to an AC circuit.

-A rheostat is also often used in power supplies, as it can be adjusted to adjust the voltage output from a power supply. This means that it can be used for adjusting the output of a power supply, which may be needed in certain applications.

-Rheostats are used in the control of oscillators and clocks. This is because they can be adjusted to compensate for variations in voltage or current that are applied to a clock, which may be needed by an oscillator.

-A rheostat is also used in the control of motors, as it can be adjusted to compensate for variations in current that is applied to a motor. This means that it can be used to control the speed of a motor.

What is the difference between rheostat vs potentiometer? 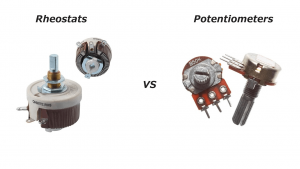 Rheostats are generally much more expensive than potentiometers and are usually used for applications where precise adjustment of electrical output is required.

How to buy rheostats?

Do you want to buy rheostats for your application? I hope that the information in this article will help you make the right choice. Some of the factors to consider include:

– The size of the rheostat.

– The type of rheostat (potentiometer vs rheostat).

– The physical appearance of the rheostat.

– The price of the rheostat.

– How many channels the rheostat has.

– How many times the input voltage can be adjusted by tapping it with your finger or a tool.

– The material the rheostat is made of.

The rheostat you choose will depend on your application. Meanwhile, we at ICRFQ can help you get the rheostat that you want in China.

When you buy rheostat from ICRFQ, you can be assured that the rheostats we sell are of high quality and at a good price. We are committed to providing our customers with high-quality products and services. Feel free to contact us for more information about rheostat or other products.