Everything You Need to Know About Selector Switch 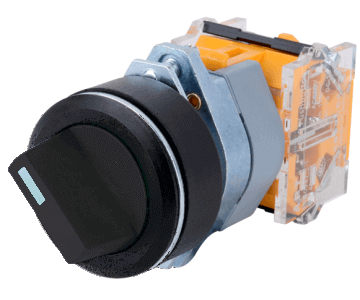 It’s all about having control of the power. It’s also critical in industrial settings to have reliable human-machine interactions. The response must be assured whenever a procedure is started or stopped.

An electrical panel would not be complete without a selector switch. It can be utilized in various applications and comes in a variety of styles.

What is a Selector Switch?

A simple selector switch is on the front of the panel, and a wide range of potential contact combinations (via the contact blocks) are on the interior of the enclosure. The main difference between a selector switch and a pushbutton is that a selector switch has a rotating cam with ridges and flats that allows the plungers to be actuated independently. In contrast, a pushbutton has a plate that pushes down both contact plungers at the same time.

A 3-position selector switch is used in the diagrams below to open or close two circuits, “hand” and “auto,” for a pump application. The following works: (reflects a left, center, and right selector switch positions). 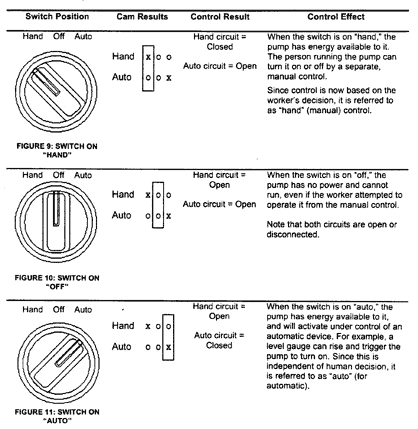 Selector switches have indicator lights. Using a selection switch, we can instruct machines on how to operate. The machine’s indicator lights inform us what it is doing or not doing. When light is attached to a machine process and turned on, the device indicates that it is operating.

Selector switches are employed when multiple control options are required (e.g., Hand-Off-Auto). When a maintained contact is needed, these switches are the best option.

Rotary switches rotate in a circle and can stop in various places. With a single switch, they can control a variety of circuits. These devices have certain advantages over ordinary switches. They can turn circuits on or off based on the position of the actuator, and there are many potential actuation positions. 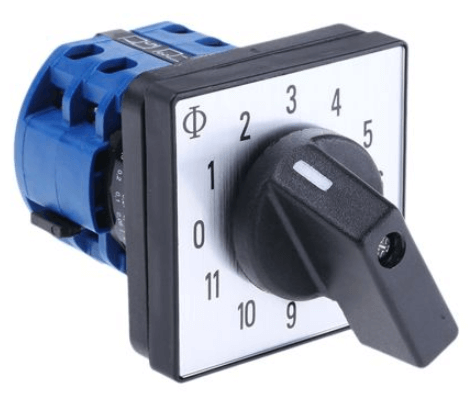 Many contacts can happen simultaneously on a single switch position using rotary switches. While rotary switches are commonly found on industrial equipment, they can also be found in consumer equipment, such as automobiles, where they are used to regulate fan speeds. Because sophisticated switching activities are now performed using digital devices such as touchscreens, rotary switches are becoming less frequent. On the other hand, mechanical rotary switches are still utilized in systems where a computer failure could be dangerous.

A spinning spindle is used in rotary switches. When the switch is in a specific position, the rotors are mounted on a spindle, and each rotor has an arm protruding outward that can make contact with a terminal. The switch can have dozens of locations, each connected to a separate circuit, depending on the number of rotors.

A detent mechanism is used to place the rotary switch in the right position. This mechanism causes the switch to “click” into place and stay there until sufficient force is applied, preventing the switch from rotating freely and mistakenly being set to the wrong setting. A detent is a wheel mounted to the rotor and has notches or grooves cut into it. When the wheel is in the proper position, a spring-loaded ball bearing or a piece of spring steel pressed against the wheel presses into the groove and holds it in place.

The maximum number of decks that can be attached to a single, actuated shaft is the number of decks. A segment, wafer, or module is another name for them. Single-deck and multi-deck are the two most common types. Each deck consists of a spherical plate with a series of connections. Rotating switches with a single deck can control multiple circuits at the same time. Various circuits can be controlled simultaneously via multi-deck rotary switches.

Number of Poles Per Deck

The number of different circuits that can be triggered using a rotary switch per deck is known as the number of poles per deck. Instead of throws, the output connections are commonly referred to as ways. The switch has a total of 12 ways; however, each pole can have one, two, three, or four poles. The signal will be sent from the pole to the output terminals through the rotating contact. The number of terminals required dictates the number of places available on a switch.

There are two types of frames for rotary switches: open and enclosed. The visible moving elements in open frame switches enable self-cleaning contact mechanisms, assuring reliable operation. They offer more bespoke contact setups, and the sections can be purchased individually. The internal sections of enclosed frames are not visible, but they provide better dust and contaminant protection. They are typically less expensive and smaller than open-frame rivals.

Colors, forms, and materials for the selector switches are all available. Plastic or metal are both options. The mounting diameter could be anything between 16 and 30 millimeters.

The types of selection switch actuators are as follows:

The selector switch with the short handle has a short handle. It’s the standard type. It is also the least expensive.

The selector switch with the long handle features an extended handle for easy access. It is simple to operate. It is more expensive than a selection switch with a short handle.

For safety reasons, a key-operated selector switch is used. The key can be removed in various ways, but no further action is possible once it is removed.

A lamp element is used to illuminate the illuminated selector switch. Combining two functions into a single operator saves both space and money.

There is no light element in the non-illuminated selector switch. Its operator is more powerful than a lit switch.

Two electric circuits are switched via a two-position selector switch. As an example. 1-0 or 1-2 is the score. It can be permanent or temporary.

Overvoltage protection and voltage in phase availability and quality control are all automatic phase selection switch functions. The gadget chooses the phase priority closest to it and connects a single-phase load to it. When a single-phase load is needed from a three-phase 4-wire network, an automatic phase selection switch is employed in the industrial and domestic sectors. As a result, voltage fluctuations in the network are avoided, and the responsible single-phase consumer receives an uninterrupted power supply.

When there is a bad voltage source on the network, a phase selector switching device in a residence or an industrial facility provides a reliable guarantee that “sensitive” appliances will be appropriately safeguarded from failure.

An automatic gadget linked to a three-phase network will choose the phase with the best specifications on its own. Simultaneously, the device control, specifically the most advantageous phase selection, is quick enough.

What is a selector switch in electrical?

A selector switch can control the on or off of different current circuits by rotating the handle. Common control consists of a mechanical, electrical, or electronic device for making, breaking, or changing the connections in a circuit. Illuminated and non-illuminated selector switches are available in two and three positions, respectively.

What is a rotary switch?

When the spindle of a rotary switch is moved in either a clockwise or anticlockwise direction, the contacts and connections are altered.

What is an auto-manual selector switch?

Selector switches are operated by turning a knob instead of pushing a button. The MAN-OFF-AUTO switch is a relatively frequent selection switch. There are marks on the installation panel that show MAN stands for Manual and AUTO stands for Automatic.

What is a 3-way rotary switch?

We get three different positions when we rotate the handle in either a clockwise or anticlockwise manner.

What is a 2-way rotary switch?

When we spin the handle in either a clockwise or anticlockwise manner, we get two different positions.

What is the difference between a selector switch and a pushbutton switch?

A selector switch operates on the following principle: on the front of the panel, there is a basic selection switch, and on the inside of the enclosure, there is a wide range of possible contact combinations. The main difference between a selector switch and a pushbutton is that a selector switch features a rotating cam with ridges and flats that allows the plungers to be actuated individually. In contrast, a pushbutton has a plate that pulls down both contact plungers at the same time.

How do you test a selector switch?

How does a voltage selector switch work?

A voltage selector allows you to choose the internal circuit that is most suited to the input voltage level (either 110 or 230V). The switch sends current to the appropriate components in order to handle the requisite voltage.

What is a 3 position selector switch?

A 3-position selector switch is used for a pump application to open or close two circuits, “hand” and “auto.” It functions in the following way: (reflects a left, center, and right selector switch positions). Selector switches include indicator lights.

What type of switch is the selector switch for local or remote?

So, what is the difference between a Remote and a Local control switch? A Remote/Local control selector switch can typically be found near the controlled plant [i.e., LOCAL to the equipment], allowing an operator to take control locally without engaging with or accepting remote supervisory directives.