When a circuit breaker trips, it doesn’t matter whether you’re dealing with a short circuit or overload. In both cases, you have a situation that exceeds the electrical capacity of the circuit.

This article will discuss short circuits vs. overloads, their causes, and how to fix them.

What is a short circuit? 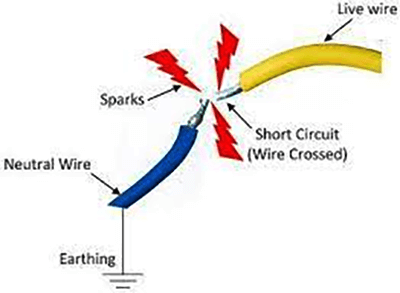 A short circuit occurs when the current in a circuit can flow directly from one terminal to another, instead of flowing through the components of the circuit.

The problem with a short circuit is that it bypasses all the electrical resistance built into a circuit. This means that the current can build up quickly, causing overheating and fire.

Electrical circuits have components, such as wires and fuses, that are designed to handle a certain amount of current.

When too much current flows through them, they overheat and stop working. The resulting short circuit can lead to damage or even fires in electrical wiring or even appliances.

Short circuits occur when something creates an alternate path for electricity to follow, bypassing all resistance in the usual path of the circuit (the wire). Short circuits can be intentional or unintentional.

Short circuits are not limited to household electric wiring – they can happen anywhere electricity is used or stored outside of its normal circuit.

What is an unintentional short circuit?

An unintentional short circuit occurs when two conductors accidentally touch each other and allow electricity to flow through them instead of through their intended path in a circuit. This can happen when wires are run too close together, when wires are improperly installed, or when insulation on wires becomes worn out or damaged. A short circuit can also occur if something causes a normally-open device (such as a switch) to become closed (normally-closed device). When these things happen, electricity is forced to flow through a path that it was not intended to flow through. This causes a short circuit.

What is an intentional short circuit?

An intentional short circuit occurs when someone intentionally connects two conductors in such a way that electricity can pass through them. This is done to purposely allow electricity to bypass the normal path of the circuit, and the device or appliance connected to those wires will not work properly or stop working altogether.

What is an overload?

Overload is a situation in which a component or circuit is given more current than it can handle. An overload condition may be caused by an increase in the amount of current required by the load, or by a short circuit.

We can also describe it as a phenomenon where the load draws more current than the amount of current supplied at the source.

When a load draws more current than the supply can provide, the voltage drops, and the current increases. This causes the load to draw even more current, which further decreases the voltage and increases the current. This is called a “positive feedback loop.” The result is that the supply cannot deliver enough current to meet its rated value. If this condition continues for long enough, it can cause damage to or destruction of equipment or even injury to people working with it or near it.

Now that we have defined the two, let’s dissect the differences between short circuits and overload.

Short circuit and overload tend to differ in their nature of voltage. When a short circuit occurs, there will be zero voltage across the circuit.

For the overload, even though there will be a significant voltage drop, it will never be zero. This implies that the circuit will still have some voltage.

For the overload, the current will also be high.

Both of these phenomena can cause damage to your electrical appliances and even cause you harm. However, there are some differences between these two phenomena when it comes to the potential damage they can create.

For example, a short circuit on an electrical appliance could lead to severe damage or even complete destruction. The same cannot be said about an overload situation as this will only affect one particular component in your appliance.

In most cases, there are various ways in which you can avoid electrical fires that are caused by overloads and shorted circuits. However, for those cases where there is no other way to avoid these situations, it is better to be prepared.

The higher the current the more the danger. Also, short circuits tend to have faster energy transfer than the overload.

Combined with other factors such as humidity, the short circuit is more dangerous than the overload.

The main reason why a short circuit is more dangerous than an overload is because the current will flow in the shortest path possible. This is because of the resistance of the wire and also because there will be no overloading.

Short circuits and overload are caused by different factors.

The main causes of a short circuit include:

-Rodents and vermin: Rodents and vermin are always found in places where people keep electrical appliances. They can damage the wires by chewing on them. This is one of the leading causes of short circuits.

-Humidity: When the humidity is high, then there will be a greater chance that your appliances will be shorted.

-Electrical storms: Electrical storms are caused due to lightning strikes and thunderstorms. These storms tend to cause a surge in the electricity hence causing short circuits.

-Bad insulation: This can also lead to a short circuit as there are chances that the insulation of the wires may be faulty.

-Improper maintenance: The wires of your appliances can get damaged if you do not maintain them well. This is one of the leading causes of short circuits.

Causes of current overload include the following:

-Bad wiring: This can lead to current overload as the wires are faulty. This could happen when the installer used the wrong wires or did not connect the wires correctly as they are supposed to.

-Excessive consumer load: This usually happens when there are too many appliances in a single circuit and the voltage is overloaded.

-Bad grounding: The grounding of the circuit is not working properly. This is why we always insist that you should take proper care of the grounding wires.

-Bad power supply: The power supply of your house could be faulty, so the circuit gets overloaded. Ensure that you tap your electricity from the best power suppliers to avoid such problems.

-Poor usage: The appliances that you use in your house can be the cause of current overload. Ensure that you do not use too many appliances on a single circuit

Short circuit and current overload attract different consequences. Let’s look at the most notable ones and how they differ.

The consequences of the short circuit include:

-Fire and burn. Cases of fire outbreaks due to the short circuit are quite common.

-All the components connected to the short circuit may be affected by thermal damage or even mechanical stress.

-Voltage drop across the circuit

-The current may flow in undesired directions on the circuit

The consequences of overload include:

-Increased levels of energy consumption since the overload will cause an increase in residual current.

-Can damage some electronics

-An overload may ultimately lead to a short circuit, which will eventually lead to more other damages.

We define fault tracing as the process of locating a short circuit or current overload in the power supply network. Fault tracing is primarily done by checking the voltage and current of each individual circuit connected to the main power distribution network.

We can define fault occurrence in a circuit as a situation where a short circuit or current overload has been detected by the power supply.

Fault occurrence can be detected by the voltage and current levels of the circuit.

Characteristics of a short circuit?

How can I tell that it is a short circuit or overload? On the list below we have combined the most common signs of short circuit and overload

-You will see sparks or arcs coming out of the circuit.

-The circuit is hot.

-There is a smell of ozone.

-The circuit has a high impedance (resistance).

-The circuit has low impedance (i.e. you have to use a lot of currents to get the same voltage).

-The circuit has no power at all, but it still produces heat and sparks in the insulation.

-You hear a popping sound from the transformer or some other device when you first turn on the power supply.

-You see wires that are loose and frayed around the connections to devices connected to your circuits in short circuiting conditions.

– Some of the devices on your circuit are not working.

-There is a difference in the voltages between the input and output of the circuits.

-There is a difference in the power supply outputs (voltage, current, frequency, etc.).

-The voltage or current levels are too high or too low for a normal load.

So you want to safeguard yourself from the effects of short circuit or current overload? There are several devices that you can use to prevent these two prevalent electrical issues. Let’s have a look at some of them.

A circuit breaker protects your power supply from overload conditions by interrupting the flow of electricity when there’s too much current.

An overload protection device protects your equipment from excessive current flowing through it.

An overload protection device protects your equipment from excessive current flowing through it.

I hope that now you know the difference between short circuits and overload. Now you know what devices are used to protect your power supply from damage. Now you are free to buy any device that will give you maximum protection.

In case you want to buy the devices in China, let ICRFQ help you. We are a reliable sourcing agent for electronic components in China.