Everything You Need To Know About Terminal Blocks 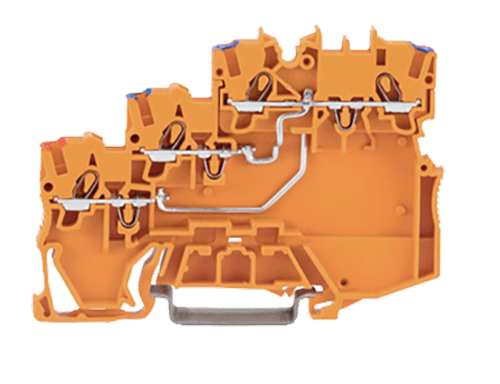 When it comes to electrical wiring, there are a number of different ways that circuits can be set up. For example, given the correct materials, you can create and install your own home electrical system from scratch. Alternatively, you may prefer to use pre-made solutions like terminal blocks.

This article will explain what terminal blocks are, how they work, their pros and cons as well as some important considerations if you’re thinking of using them in your own home.

Furthermore, we’ll also offer some practical advice on how to choose the best terminal blocks for your needs as well as where to buy them from.

What Are Terminal Blocks?

Terminal blocks are an electrical wiring components used to connect and disconnect electrical parts quickly and easily. They are very common in industrial settings where power needs to be transferred between pieces of equipment that may be heavy and difficult to move.

Simply put, they are a device used to connect or disconnect wires that are carrying electrical current.

They also have a connector that you can use to terminate or attach these wires. In other words, they are a one-piece block that has terminals on either side of it. These terminals can be inserted with wire ends that can then be bolted together to make a connection.

As we said, terminal blocks are very common in industrial settings. However, they can also be used in residential wiring, though you’ll likely find them in areas where wiring needs to be run in a straight line, such as behind wallboards.

Components of a terminal block

There are three main components to a terminal block: the housing, the base, and the terminals.

The housing of the block is the outer shell or casing, that holds all the other parts together. This is usually made out of non-conductive material like plastic or rubber-coated steel.

Terminal blocks are often used in combination with a conduit or conduit fittings to make sure that the wiring is run in a safe and easy-to-maintain way.

How Are Terminal Blocks Used?

Terminal blocks are used to connect conductors safely and easily. They are most commonly used in industrial settings, but can be found in residential wiring too. There are a few different ways that they can be used.

– They are extremely easy to work with. You can just attach the wires, tighten them down with a screwdriver, and voila – your circuits are complete.

– They are inexpensive. A single terminal block costs very little money to buy. It’s also easy to source them in bulk for even cheaper.

– They are widely available. Terminal blocks are a standard electrical component that is easy to find in hardware stores around the world.

– They are safe to use. Terminal blocks are designed to be safe to use. You won’t need to worry about accidentally touching the wrong wire and getting a shock. 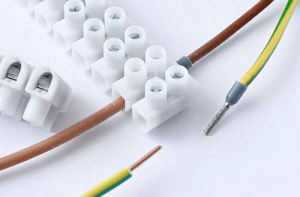 Terminal blocks are grouped into different classes or categories. We are going to look at these types and where they are used.

Terminal blocks based on their devices

Terminal blocks are also classified based on the electrical devices that are used with them. Under this, we have;

-Actuator blocks: Blocks of this category are used for connecting actuators to control machinery and equipment. Actuator blocks are available with both screw terminals and quick-connect terminals.

-Relay terminal blocks: These blocks are used for connecting relays to control electrical devices such as lights, pumps, fans, etc.

-Power terminal blocks: These blocks are used for connecting wires to power supplies. They can be used as a replacement for bulky power connectors such as barrel connectors or spade connectors.

Terminal block: This is a special kind of terminal block that can be fitted with diagnostic equipment such as probes and meters to troubleshoot equipment and machinery without having to disconnect the wiring from it.

There are two types of terminal blocks: standard and high-density. Standard terminals have a single row of terminals and a single column of mounting holes for the screws.

So you want to get the bet terminal blocks? Here are the electrical factors that should guide you in choosing the right terminal block for your application.

-Voltage rating: This factor determines the maximum voltage that can be applied to the terminal blocks without causing sparks or short circuits.

-Contact resistance: This determines how much voltage drop occurs across each contact of the terminal block when it’s carrying load current. The lower this value is, the better.

-Insulation level: This is also very important because it determines how much voltage drop occurs across each contact of the terminal block when it’s not carrying load current (i.e., when there are no wires connected). The lower this value is, the better.

-Pitch: This is the distance between each contact of the terminal block. A higher pitch means you can handle more current, which is important if you need to carry more than one wire.

-Pole count: This is the number of wires that can be carried by each terminal block. For example, a terminal block with 24 poles can carry up to 24 wires.

-Terminal and fuse type: This determines how the terminals are connected to the wire. For example, if you want to connect your wire to a terminal with a screw terminal, you’ll need to use an adapter cable.

Other than electrical, you should also consider the mechanical aspects of the terminal blocks. They include:

-Length: This is the length of the wire that you can connect to the terminal block. The longer you make this, the more flexibility you’ll get in terms of how you can use it, but also if it gets in your way while working on your device.

-Depth: This is how deep each contact is when connected to a wire. This makes no difference for most wires, but for thicker wires (like HDMI), this can become an issue because it makes it harder to insert into some terminal blocks and also prevents them from being inserted into some other terminal blocks (for example, when using a screw terminal).

-Flexibility: This refers to how many ways you can connect wires to your device through the terminal block. For example, if you have one port on your motherboard where all SATA ports are connected and another port where all USB ports are connected and they both need to be used simultaneously, then this will be important because you need multiple connections from that port so that both SATA and USB connections can be made simultaneously without having to break out all of those connections at once.

-Portability: If you need to carry your terminal block around with you wherever you go or always have an extra one available for replacement purposes then this should be considered as well.

Where to buy terminal blocks

Terminal blocks can be found in almost any hardware store. However, you may want to shop around and compare prices before buying them. You should focus on buying from reputable terminal block manufacturers and suppliers in China.

In this case, you may consider using a sourcing agent such as ICRFQ to help you find reputable manufacturers and suppliers.

For instance, we have a listing of terminal block manufacturers with pricing and specifications for each. You may also want to check out the list of suppliers we have here.

So, what are you waiting for? Start exploring the possibilities of building your projects.