Everything You Need To Know About Varistor 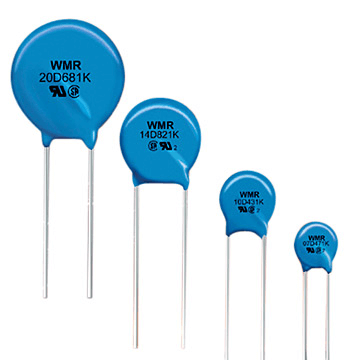 There are two types of variable resistors: those in which the effective length of the resistive strip plays a role in changing the resistors, such as potentiometers and rheostats, and those in which a manual change in resistance is not possible and are instead sensitive to physical factors such as temperature, voltage, magnetic field, and so on. This article will take you through the world of Varistors, which are voltage-dependent resistors.

What is a Varistor? 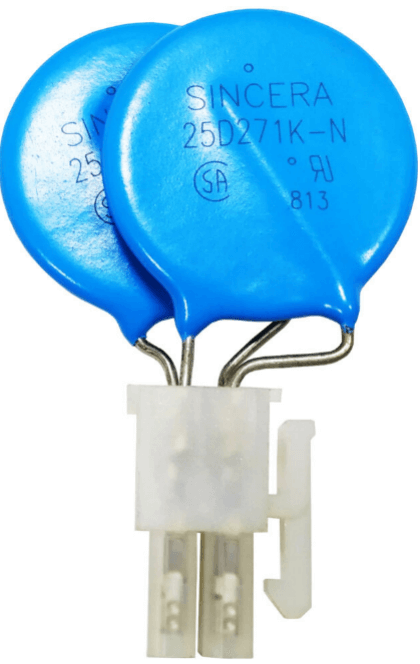 A variable resistor’s resistance varies depending on the applied voltage. The term is derived from a linguistic combination of “varying” and “resistor.” They feature non-ohmic characteristics and are also known as VDR (voltage-dependent resistor). As a result, they are classified as nonlinear resistors.

Unlike potentiometers and rheostats, where the resistance changes from a low to a high value, the opposition in Varistor changes automatically as the applied voltage changes. Like a Zener diode, this Varistor contains two semiconductor elements and provides excess voltage protection in a circuit.

So, how does the resistance change as the applied voltage changes? The answer, of course, is in its composition. Its resistance decreases as the voltage across it increase since it is constructed of semiconductor material. When the voltage is increased too much, the resistance across it decreases dramatically. They’re a good choice for over-voltage protection in delicate circuits because of this tendency.

The metal oxide varistor (MOV) is composed of zinc oxide as an insulating material (ZnO). This zinc oxide was crushed onto a ceramic pallet. Only around 10% of the filler material used for proper connection formation is zinc oxide, with the remaining 90% being zinc oxide. 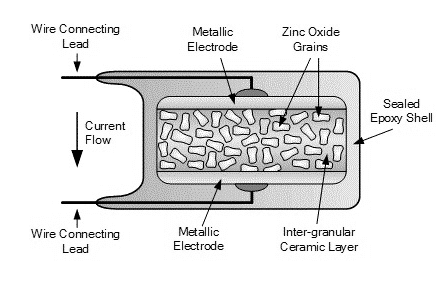 It is constructed with two leads and a durable epoxy outer casing. It resembles a disc capacitor in appearance. The rest of the building specifics are included below. It’s crucial to remember that a varistor must be carefully chosen from many options before being used. The most important criterion is the voltage, which should be 15 to 20% higher than the operational voltage.

How do Varistors Work?

The Varistor has a response time of ns, faster than a gas discharge tube but slower than a TVS tube. Overvoltage protection for electronic circuits can generally meet the requirements in terms of response speed. A varistor’s junction capacitance is often in the thousands of Pf range.

It should not be used to safeguard high-frequency signal lines directly in many circumstances. The huge junction capacitance will increase leakage when used to protect AC circuits. When designing a protective course, the current must be taken into account fully. A varistor has a higher flow capacity than a gas discharge tube, but it is smaller.

The Resistance of a Varistor 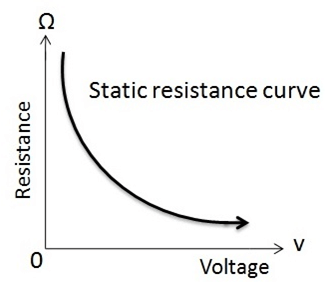 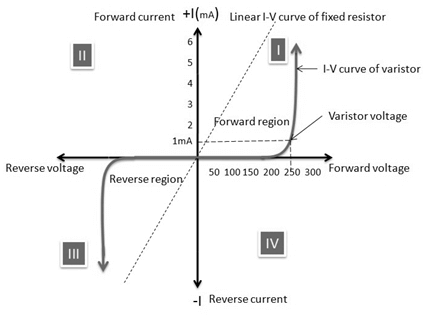 Main parameters of the Varistor

The function of varistors

The Varistor’s main job is to safeguard the circuit against transient voltages. The Varistor is equivalent to a switch due to the mechanism mentioned above. The current flowing through the switch surges only when the voltage exceeds its threshold. The impact on other circuits is minimal, limiting overvoltage effects on subsequent sensitive circuits. The Varistor’s protective function can be employed frequently or turned into a one-time protection device, comparable to a current fuse.

The Varistor’s protective feature has been widely employed. A varistor, for example, is used in the power circuit of a household color TV to complete the overvoltage protection function. The Varistor reflects its clamping features when the voltage surpasses a threshold value. The high voltage is pulled low, allowing the next circuit to operate within the safe voltage range.

The Varistor is mostly employed in circuits for transient overvoltage protection. Still, it also serves as a circuit element because of its volt-ampere characteristics, comparable to a semiconductor Zener’s. The Varistor, for example, is a type of DC high voltage small current-voltage stabilizing element with a steady voltage of thousands of volts or more than silicon Zeners cannot achieve. Varistor can be utilized as a voltage fluctuation detector, a DC level shifter Bit, a fluorescent starter, a voltage equalizer, etc.

The most common Varistor is a metal oxide varistor (MOV), which consists of a ceramic block between two metal sheets and comprises zinc oxide particles and a small number of other metal oxides or polymers. At the intersection of particles and neighboring oxides, a diode effect occurs. It is equivalent to many back-connected diodes due to the vast quantity of dirt particles.

At low voltage, there is only a modest reverse leakage current. When a diode is exposed to a high voltage, it reverses collapses owing to hot electrons and the tunneling action, resulting in a huge current flow. As a result, a varistor’s current-voltage characteristic curve is nonlinear, with high resistance at low voltage and low resistance at high voltage.

Metal oxide varistors are the most prevalent voltage clamping devices today, and they can handle a wide range of voltages and currents. MOVs are particularly effective at absorbing short-term voltage transients and have superior energy handling capabilities due to the utilization of metal oxides in their structure.

Metal oxide varistors, like ordinary varistors, start conducting at a specific voltage and stop when the voltage falls below the threshold value. The fundamental difference between a typical silicon carbide (SiC) varistor and a MOV type varistor is that the MOV’s leakage current through the zinc oxide material is relatively tiny under normal working conditions, and its clamping transient operating speed is substantially faster.

MOVs are similar to disc ceramic capacitors in that they have radial leads and a hard outer blue or black epoxy covering, and they may be physically installed on circuit boards and PCBs in the same way.

To choose the right MOV for a given application, you must first determine the source impedance and the transient’s possible pulse power. Because the power supply characteristics are often unknown, selecting the suitable MOV for input line or phase transients is slightly more complex. In general, the electrical protection of MOV selection circuit power transients and spikes are based on the best guess.

On the other hand, metal oxide varistors can be utilized for a wide range of varistor voltages, from around 10 volts to more than 1000 volts AC or DC; thus, knowing the source voltage can assist you in picking. Choose MOV or silicon varistor as an example. The square voltage rating should be slightly higher because the maximum continuous voltage root is greater than the expected power supply voltage. A 120-volt power source, for example, is 130 volts RMS, while 230 volts is 260 volts RMS.

The transient pulse width and the number of pulse repeats determine the maximum surge current value the Varistor will employ. The transient pulse’s width, typically 20 to 50 microseconds (s), can be estimated. The Varistor may overheat and be damaged if its peak pulse current rating is insufficient. As a result, assuming the Varistor performs without fail or degradation, it must be able to dissipate the transitory pulse’s absorbed energy quickly and safely revert to its pre-pulse condition.

Multilevel protection can be employed if the electrical equipment demands a low residual voltage. Several popular safety circuits that use ZnO arresters to eliminate ambient overvoltage are listed below.

When an inductive load circuit is abruptly severed, the overvoltage can be several times the power supply voltage. Overvoltage can produce arcing and spark discharge between contacts, causing damage to contactors, relays, and electromagnetic clutches and reducing the device’s service life. Because the Varistor shunts at high voltages, it can be utilized to protect the contacts by avoiding spark discharges at contact break.

Varistors are frequently used to protect semiconductor devices from being burned due to overvoltage generated for various reasons. The varistor protection transistor’s application circuit is shown in the diagram below. Overvoltage damage to the transistor can be efficiently inhibited between the transistor’s collector and emitter or the transformer’s primary shunt varistor.

How to test Varistors?

To measure the real resistance value, connect the two test leads (regardless of positive or negative) to the two ends of the resistor. The range is chosen based on the nominal value of the measured resistance to increase measurement accuracy. The middle region of the ohm scale is fine due to the nonlinear relationship of the scale.

As a result, the pointer value should be as close as feasible to the scale’s middle, that is, within the range of 20% to 80% of the full scale’s radian. Between the reading and the nominal resistance, an error of 5%, 10%, or 20% is allowed, depending on the resistance error level. The resistor’s expected value is altered when the error range is exceeded.

How to measure the quality of a varistor?

A power source with a wide regulating voltage range and good current limiting action is usually required to judge the Varistor. A voltmeter with good precision is connected parallel across the Varistor when measuring. Connect both ends of the Varistor with the adjustable power lead.

The voltmeter displays the voltage of the power supply. You should gradually increase the voltage until you reach a point when the voltage drops dramatically. The protection value of the Varistor is the voltage at the last time before the reduction.

The specific conditions of the circuit must be examined while selecting a varistor, and the following criteria should be followed in general:

The Varistor’s nominal discharge current should be greater than the surge current necessary to sustain or the highest surge current during operation. The little discharge current may be computed by pressing the value of more than ten shocks in the rating curve of times of the surging life, which is around 30% of the maximum shock flux (i.e., 0.3IP).

The clamping voltage of the Varistor must be lower than the maximum voltage (i.e., safe voltage) that the component or equipment under protection can withstand.

The choice of capacitor Cp

The capacitance Cp should be reduced for high-frequency transmission signals and vice versa.

What is a varistor used for?

Circuits with varistors are protected from severe voltage spikes. When a circuit is subjected to a big voltage surge, the outcome is virtually always devastating. Across the signal lines, a capacitor could be put.

What happens when a varistor fails?

The current will increase when the Varistor heats up because it has a negative temperature coefficient. Thermal runaway may occur, resulting in varistor failure.

How do you test for Varistor?

Do varistors have polarity?

Metal Oxide Varistors have two leads and are similar to resistors. These leads have no polarity and can thus be connected in any direction.

Why would a varistor burn out?

When the leakage current in a varistor is too high, and the temperature rises to a particular degree, the low melting point metal melts, causing the Varistor to fail.

In most electronic circuits, currents and voltages of milliamperes and millivolts are encountered. The input impedance of electronic circuits is quite high, and they are extremely sensitive. Overcurrent and overvoltage safety measures aren’t appropriate in this situation. A device that is both rapid and sensitive is required.

A varistor is a device that suits our needs and successfully controls voltage spikes, protecting our circuit. The name comes from the term “variable resistor.” Varistors are also used to preserve power electronic devices that handle huge currents.