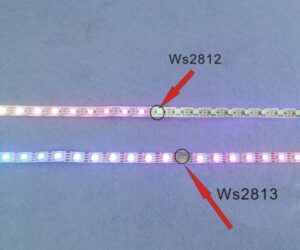 WS2811 and WS2812 are two major LED drivers or ICs that  have dominated the LED market. Most of the LED fixtures today are run by these  chips.

They are called drivers because they are designed to control the intensity and behavior of the LED lighting fixtures.

Despite being used for  the same purpose, there are some differences between them. And it is these disparities that will make you choose one over the other.

In this guide, we are going to break down the differences between WS2811 vs WS2812.

At the end of it all, you will be able to choose the perfect option for your application.

WS2811 is one of the common types of digital LED controller chips or integrated circuits. The IC  is commonly used in different applications, especially the ones that need to incorporate the RGB lighting. These applications include the RGB  LED strips and the RGB LED displays.

A typical RGB strip has the capacity of up to 30 LEDs per meter.

WS2812 has a data cable thar receives  digital data. This data determines how it will control the LEDs.

In most applications, the IC is integrated with other controllers and even microcontrollers to enhance the usability and effectiveness of controlling the LEDs.

The WS2811 operates on a single-wire protocol to control the state and operation of multiple LEDs.

The operation of this integrated circuit entails sending data that exists in the form of a pulse through the pulse width modulation (PWM) over a single cable. This signal is then encoded by the pulses which indicate the state of the LED and its level of brightness or intensity.

Since this IC allows signal to be transmitted on a single wire, you can install multiple LEDs on that wire. This formation also makes it easier to  deal with the installation.

The advantages of WS2811 include:

-Easy to install and run even when you have multiple LEDs. This is possible thanks to the single-line configuration

-Possible to use long cables. This also means that you  distribute the LEDs over a long distance when using the WS2811 integrated circuit.

-Voltage capacity of 12V. With a sufficient supply voltage of 12V, you can easily run multiple LEDs and each will get sufficient power.

The disadvantages of the WS2811 include:

-High power consumption: The fact that the IC runs on a 12V means it is a heavy consumer

-Does not allow redundancy of data

-Difficult to achieve smooth dimming curves since each color has a limit of eight data bits.

WS2812 is also a single-wire and programmable integrated circuit designed for the intelligent control of the LEDs. The IC features the RGB LEDs and tends to  deliver complex lighting and animation effects on the LEDs.

You will need this IC if you want more than just the basic LED lighting. This explains why it is commonly used for lighting the outdoor signs,accent lighting, and decorations for special occasions.

WS2812  is compatible with dfferent microcontrollers such as Raspberry Pi, Arduino, Arduino among others.

The design of this IC allows fast data transfer rates of up to  800kbps. It is also quite efficient when it comes to power management. You can connect it directly to a power source and start using. No complex installation processes required.

It is an ideal driver for the applications that need maximum control over lighting.

The operation of the WS2812 is pretty simple. It has three separate LEDs;red, green and blue. All of them are controlled by a single wire that is connected to the integrated circuit in charge of controlling the intensity and behavior of the LEDs.

The one-wire built-in protocol also ensure that one controller controls all the three LEDs. This  controller sends a series of pulses to the LEDs which will react accordingly, whether it is to be on, off or change intensity or even color.

The advantages of the WS2812 include;

The main disadvantage of this LED driver is it runs of 5 volts. While it may e saving energy, it also deprives power especially when you need bright and high-intensity results. 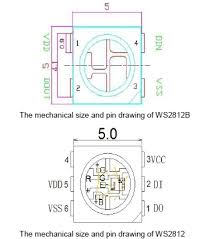 Now that you know what each of these LED drivers bring, let’s look at their key differences.

From  the specs, WS2811 is rated at 12V while WS2812 is rated at 5V. This means that the former  has a higher power consumption. This allows it to host more LEDs than the WS2812 LED strip.

WS2811 is designed to controlled up to three LEDs at a time while WS2812 can only control one LED at a time. When it comes to these numbers, ensure that you don’t go below 3 when using WS2811.

Otherwise, the two LED strip drivers are similar in many ways. First, all of them have a single data line. This implies that data transmission is the same.

Secondly, they are of the same colors. Both have red ,green and blue colors that are delivered at the same brightness and intensity.

Lastly, both support the same number of LEDs per meter which is 60.

There is no objective answer to this question. The choice of the LED strip driver will depend on your preference and use.

For instance, WS2812 is an ideal option if you want to save power while WS2811  is known for its brightness.

Regardless of the choice, ensure that you buy LED light strips for sale from reputable suppliers in China. We at ICRFQ are the one-stop sourcing agents for the LED integrated circuits in China.