Everything You Need To Know Crystal Oscillator 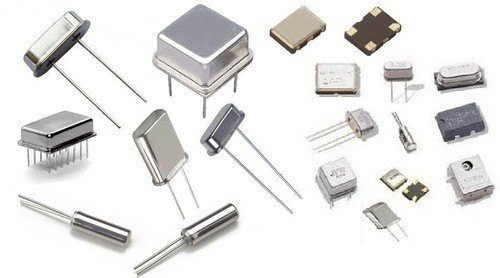 The frequency stability of an oscillator is impacted by continuous operation. Its frequency changes occasionally. The following are the primary variables that influence an oscillator’s frequency:

Resistance, capacitance, and inductance values in RC and LC oscillators change with temperature, impacting frequency. The use of piezoelectric crystals in oscillators helps to solve this issue.

Oscillators with excellent frequency stability use parallel resonant circuits using piezoelectric crystals. Crystal oscillators are the name given to such oscillators.

What are Crystal Oscillators

How Does It Work

A crystal material has its component molecules, atoms, or ions arranged in a regular, repeating pattern that spans all three spatial dimensions.

Since everything has a natural resonance frequency of vibration, almost any elastic object could be used as a crystal when equipped with suitable transducers. Steel has a high sound speed and is quite springy, for instance. Before quartz, it was regularly employed in mechanical filters. Size, form, elasticity, and sound propagation speed all affect the resonance frequency of a material. Typically, a basic rectangular or circular disk is used to cut high-frequency crystals. Commonly, tuning fork-shaped low-frequency crystals are utilized in devices like digital timepieces. A cheap ceramic resonator is frequently used in place of a quartz crystal for applications that do not require highly accurate time.

A quartz crystal installed and cut appropriately can bend in an electric field by passing a voltage over an electrode on the crystal or close by. Inverse piezoelectricity or electrostriction are two terms for this characteristic. Quartz produces an electric field as it assumes its original shape after the area is gone, and this can produce a voltage. As a result, a quartz crystal functions like an RLC circuit, which is made up of a capacitor, inductor, and resistor and has a fixed resonant frequency.

Additionally, quartz has the benefit of having elastic constants and size variations that allow for a very low-frequency dependence on temperature. The specific qualities are influenced by the vibration mode and the cutting angle of the quartz. As a result, the plate’s resonant frequency, dependent on its size, does not significantly alter. This implies that a quartz oscillator, filter, or clock keeps its accuracy. The quartz oscillator is installed in a temperature-controlled container known as a crystal oven for sensitive applications. It can also be mounted atop shock absorbers to shield it from external mechanical vibrations.

An electrical network that has low-impedance (Series) and high-impedance (parallel) resonance sites placed closely together can be used to simulate a quartz crystal. The impedance of this network can be expressed mathematically as follows (using the Laplace transform):

A crystal’s (parallel) resonant frequency is lowered by adding capacitance across it. A crystal’s (parallel) resonance frequency rises as inductance is added across it. A crystal’s oscillation frequency can be altered by using these effects. A known “load” capacitance is typically added to crystals by crystal makers after cutting and trimming them to have a specific resonance frequency. When a 6.0 pF capacitor is connected across, a crystal designed for a 6 pF load will resonate at the stated parallel frequency. The resonant frequency is greater without the load capacitance.

The electronic circuit must be precise as the crystal manufacturer specifies for the crystal to work at its designated frequency. The crystal does not typically oscillate at exactly either of its resonant frequencies, as these points about crystal oscillators in this frequency range imply.

Crystals operating beyond 30 MHz (up to >200 MHz) are typically operated at series resonance when the impedance is equal to the series resistance and seems to be at its lowest value. Instead of the parallel capacitance, these crystals’ series resistance (100 ) is stated. One of a crystal’s overtone modes, which occurs close multiples of the fundamental resonant frequency, can be forced to vibrate to attain higher frequencies. Overtones are only used for odd numbers. A crystal-like is known as a third, fifth, or even seventh overtone crystal. To do this, the oscillator circuit typically has extra LC circuits to choose the required overtone.

Quartz is the material used the most frequently to make oscillator crystals. Natural quartz crystals were employed at the start of the technology’s development. Still, synthetic crystalline quartz produced using hydrothermal synthesis has gained popularity since it is purer, less expensive, and easier to handle. Deep well pressure transducers are a few still-practical applications for natural crystals. The USA regarded natural quartz as a strategic mineral during World War II and for some time following. Brazilian imports of large crystals were made.

The crystal’s Q determines the frequency’s stability. An inverse relationship exists between the frequency and the constant dependent on the particular cut. Additional elements that impact Crystals Q are listed below.

● The Level of Surface Finishing

● The Degree of Driving of The Crystal

● The Geometry of The Crystal

● The Material Purity and Crystal Defects

● The Presence and Absorbed Dose of Ionizing and Neutron Radiation

Crystals frequently experience activity dips abnormalities in the relationship between resistance and, temperature and frequency. The value of the load capacitors affects the temperature position of these small downward frequencies or upward resistance excursions, which are confined at specific temperatures.

Mechanical Stress has a similar impact on frequency. Some of the numerous causes that can stress out these crystals are listed below.

Vibrations, Shocks, and acoustic noise are additional variables that cause dynamic Stress. The Stress Compensated cut is one example of a cut that is less susceptible to stressors. Changes in atmospheric pressure can also cause deformations in the housing, which alter the stray capacitances and affect the frequency.

By allowing water molecules to diffuse into the structure of plastics, atmospheric humidity affects the thermal and electrical conductivity of the air as well as the electrical properties of plastics.

Load impedance, power supply voltage, magnetic and electric fields (in the case of sensitive cuts, such as SC cuts), the presence and absorbed dose of -particles and ionizing radiation, and the age of the crystal are additional factors that affect frequency.

We’ll be honest: understanding crystal oscillators isn’t the simplest subject. This is primarily due to many distinct crystal oscillator types, each of which serves a particular purpose and performs various tasks in various ways. This is mainly because there are practically unlimited application uses. There are a variety of uses for crystal oscillators, including military and defence, telecom, and satellite communications in space.