Everything You Need To Know About Current Division Rule 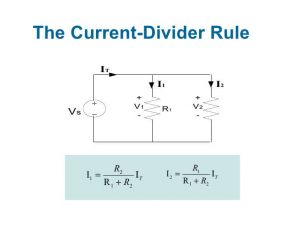 The division of current between the divider’s branches is referred to as the current division. The currents in the various components of such a circuit will always divide, reducing the total amount of energy utilized. If the impedances are equivalent, the Current is shared equally.

What Is A Current Divider?

A current divider is a linear circuit that produces a fraction of its input current as an output current. This is accomplished by wiring two or more circuit components in parallel, to achieve this, with the current in each branch constantly splitting to keep the circuit’s overall energy waste minimal.

The terminals of all the components are linked so that they share the same two end nodes in a parallel circuit, also known as a current divider. This results in multiple parallel routes and branches for the current to flow through.

As a result, while the current in each branch of the parallel circuit varies, the voltage across all connected lines remains constant, removing the need to calculate the individual voltage across each resistor and allowing KCL (Kirchhoff’s Current Law) and Ohm’s law to determine the branch currents.

In addition, the equivalent resistance in a parallel circuit is always less than the sum of the individual resistances.

Where Does the Current Division Occur?

The current in a parallel circuit is divided. The current from the power supply is split into parallel branches. The voltage across all branch resistors is the same as the supply voltage. The current division is determined by Ohm’s law and Kirchhoff’s current law.

How Does Current Divide in A Circuit?

The current divides into multiple branches in a parallel circuit before recombining and returning to the supply when the Current splits. After the break, the current in each branch equals the current before the split.

How Does the Current Divide In Parallel?

In a parallel circuit, the charge is divided into distinct branches such that one branch can carry a greater current than the other. The Current is equal to the total currents in the individual branches outside the components. It’s the same amount of current, just split up across multiple pathways.

How Is Current Divided in A Parallel Circuit?

Current divides and flows through each parallel path in a parallel circuit. The resistors’ size relationship determines the amount. According to Ohm’s law, the smaller the resistance, the more current flows. The passage of electrons is referred to as electric current.

What Is the Current Division Principle?

The current splitting between the divider’s branches is the current division. The currents in each branch of such a circuit will always divide, reducing the total amount of energy used. The shape of a current divider’s formula is similar to that of a voltage divider.

What Is the Current Division Rule?

According to the Current Division Rule, the entire current divided into either parallel combinations of two resistance or impedance is inversely proportional to the value of resistance/impedance. It essentially explains how current is split into parallel linked resistance. For both AC and DC circuits, this rule applies. However, when there are more than two parallel resistances, this rule should not be followed. With the help of the circuit below, we can understand how to divide current:

A DC source is used to power all of the resisters in this case. Resistors have the same voltage as the source voltage. The current, however, separate into different channels due to the parallel connection. At each node, the current divides, and the current value is determined by the resistance. With the help of the current divider rule, we can find the value of current flowing through each resistor.

Let R stand for the circuit’s total resistance, which can be computed using the formula below:

The first equation can also be written as:

We can now extract the value of R from equation (2) by plugging it into equation (3).

By substituting the value of V = I1R1 from equation (5) into equation (4), we arrive at the following equation:

As a result of equations (6) and (7), the current I1 and I2 values can be calculated using the following equations:

As a result, the current in either of the parallel branches is equal to the ratio of opposite branch resistance to total resistance, multiplied by the total current, according to the current division formula. 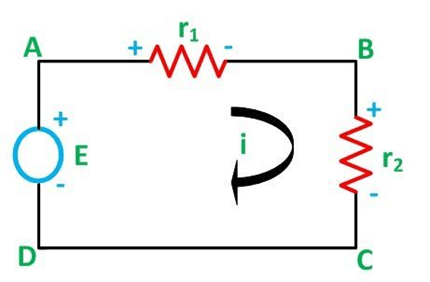 Consider a voltage source E with the series resistances r1 and r2 connected.

As we are all aware,

As a result, the current I in the ABCD loop will be:

The voltage across the resistances r, r2 are determined by plugging the value of I from equation (8) into equation (9) and solving for it:

What Is the Voltage Divider Rule Formula?

Is the Current Same in A Parallel Circuit?

The following are the characteristics and basic rules of a parallel circuit: Each parallel circuit component has the same voltage. The total current flowing from the source equals the sum of the currents flowing through each path.

Is the Current the Same in Series?

In a series circuit, the current remains constant throughout the circuit. The ammeter will give you the same reading regardless of where you place it.

When Do You Apply the Current Divider Rule?

R t denotes the parallel resistors’ equivalent resistance. Two parallel two and 10-ohm resistors are used in an electric circuit. When the input is 5 A, use the current divider equation to find the current flowing through both resistors.

Is It Possible to Apply the Current Divider Rule to A Parallel Circuit?

In a series circuit, the current is constant. Only parallel circuits in which the Current is divided can use the current divider rule.

In a circuit, how does the current divisor formula work?

What is the Current Division Rule’s Formula?

The current division rule is a rule or formula constructed from these known impedances to determine the portion of the total current flowing through any parallel channel. This rule is particularly essential in electrical engineering and is utilized in a variety of applications.

The current is split into several parallel channels when several items are linked in parallel, and for all elements with the same source voltage, the voltage is the same.

In other words, when current flows over many parallel paths (the voltage divider rule “VDR” or voltage division is used to determine the voltage in series circuits), the current is a divide in each path. The impedance of a branch determines the amount of current that flows through it.

The current divider rule is the most important formula for solving circuits, often known as the current division rule. If we know each branch’s total current and impedance, we can find the current that flows through it.

The current always flows through the path with the lowest resistance. As a result, current and impedance have an inverse relationship. The current that enters the node is split between them in inverse proportion to the impedance, according to Ohm’s law.

Because the current chose the path with the least resistance, the smaller value impedance has a larger current. And the resistance with the highest value has the least current.

Resistors can be explained using the current divider rule, inductors, and capacitors, depending on the circuit elements.