Everything You Need to Know About Electrical Transmission

Previously, power plants could only serve their immediate surroundings. Between the time it was made, and when it was used, electricity didn’t have to travel far. Things have evolved since then, and most of us now get our electricity from the grid, a vast network of power providers and consumers.

The need to efficiently transfer electricity over long distances has become more critical as power facilities have grown larger and further distant from inhabited areas. Connecting cities to power plants by stringing power lines over the terrain may appear simple as plugging an extension cord into an outlet. Nonetheless, the architecture behind these electric superhighways is far more complex and fascinating than you might imagine.

Electricity generation is a massive undertaking, sometimes including a complicated industrial process requiring large capital inputs and continuing operating, maintenance, and fuel costs. Electric utilities only get paid for the electricity that gets to your meter. They don’t get paid for the energy they waste on the grid. So, if we’re going to the trouble of creating electricity, we’d better make sure that as much of it as possible reaches the targeted users.

The issue is that most power plants are positioned far away from inhabited areas for various reasons: the land is cheaper in rural areas, many plants require extensive cooling ponds, and most people dislike living near large industrial sites. As a result, huge volumes of electricity must be carried considerable distances from generation to the point of usage.

What Is Electric Power Transmission?

As explained earlier, the generating stations are not necessarily situated where most of the power is consumed. This is to say; distance is not the only factor determining the ideal location for a generating station; the power generated must be quite far from where it is used.

This is because land located further away from the load center, typically a high-density core area, will be substantially less expensive per square meter. Another cause is the proximity of a noisy and polluting station to residential areas.

Finally, electrical supply systems are the network that allows consumers to receive electricity from a generator. A thermal power station is what this is called.

The components of electrical power transmission are listed below.

Power plants, distribution systems, and substations make up an electrical transmission system. An electrical grid is made up of all of these components. This grid meets the electricity requirements of civilization.

Transmission lines or power lines carry electricity from one location to another. The electricity is commonly alternating current so that step-up transformers can boost the voltage, allowing for effective transmission for distances of up to 500 kilometers. The following are the three sorts of lines:

The voltage range on these transmission lines is extremely high, ranging from 100 kV to 800 kV. They’re designed for long-distance transmission and require a high voltage to avoid power losses due to resistance.

Underground lines transport power across densely populated areas, underwater, and other locations where overhead lines are not possible. Because of the greater and heat-related losses, they are less prevalent than overhead lines.

Lower voltages, ranging from 26 kV to 69 kV, are transported to distribution stations via these transmission lines. This transmission might take place either above ground or underneath it. 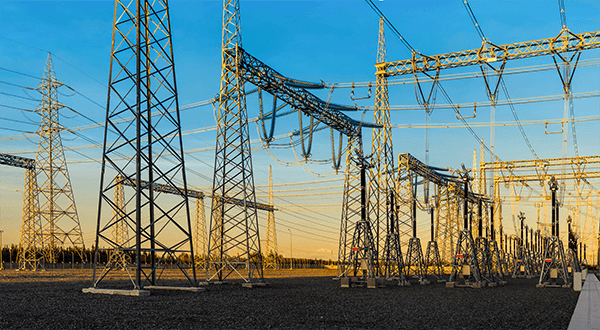 Element of a Transmission Line

Support towers: This keeps the line wires dangling in the air in place.

Below are the major types of transmission systems:

The electrical energy generated at a power plant is normally between 11kV and 33kV in voltage. It is stepped up with a transformer before being transferred to distribution centers via transmission lines to a voltage level that can range from 100kV to 700kV or more, depending on the distance it must be transmitted; the longer the distance, the higher the voltage level.

The transfer of a substantial amount of electrical power from the primary generating station to the substation through overhead electrical lines is known as direct transmission at this point. Underground cables are also employed in some nations when transmission takes place over a lesser distance.

When electrical power arrives at a substation, it is stepped down by a step-down transformer to voltages closer to those at which it was generated—usually around 11kV. The transmission phase then transitions to the distribution phase, where electrical power meets primary and secondary consumer demand. 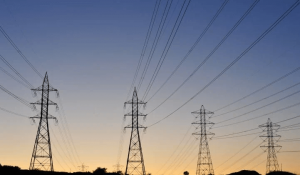 While electricity can be transported underground occasionally, most “bulk” transmission systems use overhead wires. Why massive steel towers are needed is a recurring issue addressed concerning overhead wires, especially during planning. The two most important responses are safety and dependability.

Because of the high voltages involved, local, state, and federal authorities restrict how transmission lines can be constructed, mostly for safety reasons. One of the most important requirements is how high the wires must be off the ground at their lowest point (“clearance”). Clearance requirements vary significantly but typically range from 60 to 150 feet.

Along with the need for height, there is also a need for stability. Transmission lines and towers must survive a variety of environmental factors, including severe winds and cold temperatures, when ice and snow deposits could cause a line or tower to collapse. As a result, high-voltage towers are often built to withstand so-called 50- or 100-year storms to prevent power outages.

The following are some of the drawbacks of the DC transmission system:

The following are some of the benefits of using an AC transmission system:

Despite the good benefits of the AC transmission system, some limitation still occurs. Below are the disadvantages of AC power transmission:

Lastly, for any power transmission components, contact us at ICRFQ and place your order. At ICRFQ we are the best electrical components manufacturers in China.