Everything You Need To Know About Gauss Meter 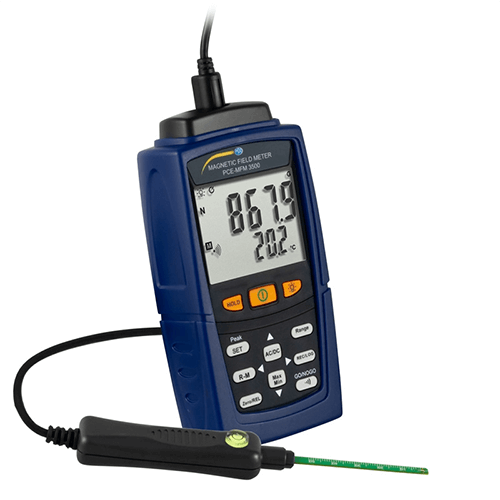 Carl Friederich Gauss was a brilliant mathematician and a forerunner in the field of magnetic fields research. In 1833, he invented the magnetometer, also known as the Gauss meter, which can measure the strength and direction of a magnetic field. He also devised a unit system for measuring magnetism. In the CGS system, the current unit of magnetic flux density or magnetic induction is the gauss. In contrast, the magnetic flux basic unit in the SI measurement system is the Tesla. This article aims to provide an insight into a gauss meter and how it works with applications.

What is Gauss Meter? 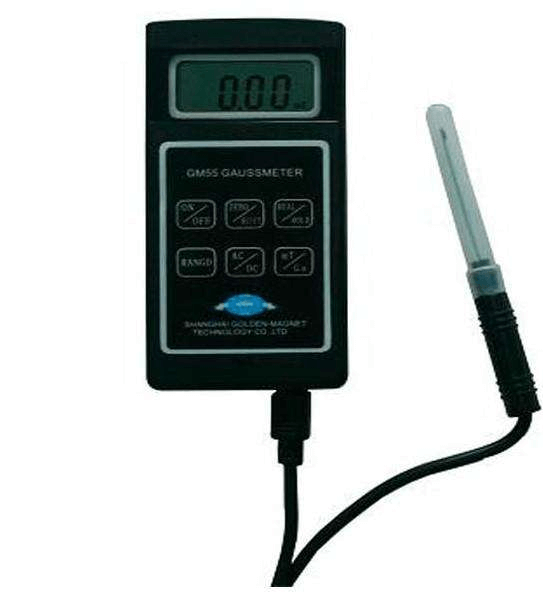 A Gauss meter is measurement equipment used to calculate the magnetization of magnetic materials. It can also be used to measure the strength and direction of the magnetic field at a specific location in space. A gauss meter consists of a gauss probe, a meter, and a cable to connect them. The Hall Effect is what makes this meter work. Small magnetic fields are also measured with this meter.

When a solid material is placed in a magnetic field that transports an electric current that is parallel to the magnetic, the Hall Effect can be used to create a transverse electric field within the material. The voltage can then be measured at an angle to the current path. As a result of the magnetic effect, this way of measuring voltage is known as the Hall Effect.

How Does a Gauss Meter Work?

The gauss sensor is the most critical component of a gauss meter, essentially a Hall probe. It can be flat to measure transverse magnetic fields or axial to measure areas parallel to the probe, such as those found inside a solenoid. Probes are often secured with brass to safeguard them from extreme conditions, mainly when developed to measure small fields.

The meter transmits a test current through the probe, which causes the Hall effect to generate a voltage, which the meter records. Because magnetic fields are rarely static and voltage varies, the meter generally has capabilities that allow it to freeze the reading at a specific value, capture and save readings, and only record the highest voltage. Some meters can automatically tell the difference between Ac / Dc fields and determine the root mean square (RMS) for AC fields.

Who Needs a Gauss Meter?

Gauss meters are valuable instruments for electricians as they help diagnose defective circuits more rapidly. Because it measures electricity to flow through the magnetic field it generates, a non-contact voltage tester is a form of gauss meter. A gauss meter measures the field strength around power lines, but a tesla meter is necessary due to the field’s strength. A gauss meter can also assess the strength of your home’s ambient magnetic field. This field varies depending on the appliances you use.

While the physiological consequences of magnetic fields are unknown, there is some proof that long-term exposure to strong magnetic fields can be hazardous. Gauss measuring tools are required if you are concerned about this. A gauss meter allows you to control the strength of the magnetic field in your home. 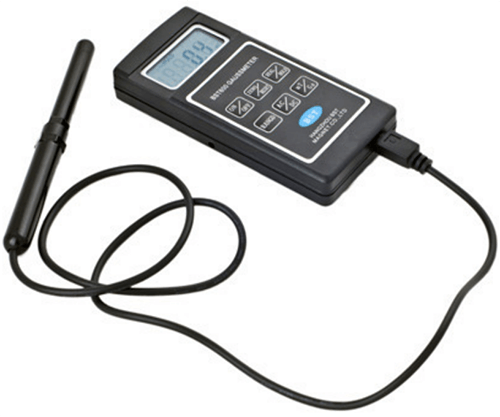 The Hall Effect Probe, Origin, And Applications For Gaussmeter

We need to define a few words before discussing the Hall effect probe. First and foremost, its genesis, which, since its discovery in 1879, has been named after its inventor Edwin Herbert Hall. Lorentz’s power in magnetism is frequently discussed, as we’ve already explained elsewhere on our blog. Unfortunately, if a magnetic field arises surrounding an electric field, their field lines will condense if they both stretch in the same direction. On the other hand, these field lines will diminish if they function in a different order. At this point, the Lorentz force had been discovered.

The load offset is produced when this force acts effectively on the electrons of a current-carrying conductor attached to a PCB. On one, there is a scarcity of electrons, while on the other, there is an abundance. The Hall effect is the result of this combination.

The Hall generator is a device that combines printed circuit boards, a control circuit, and a magnetic field. We’re talking about the Hall probe, which can monitor magnetic fields, assuming the IC remains constant. The strength of these magnetic fields is usually expressed in Tesla or amperes per meter. The Oersted unit of measurement is also available, although it is no longer in use. The Tesla, which can also be measured using the Hall Effect sensor, is the most frequent approach to looking at magnetic flux density in present days.

The conductive plate, as previously said, pushes the electrons vertically out of their initial movement direction, causing them to be positioned on one side of the plate. The resulting voltage is equal to the magnetic field, whose intensity we don’t yet know. Using the Hall voltage across the conductor, we can now calculate the electric forces equivalent to the Lorentz force and hence the magnetic field force.

Is There A Difference Between A Gauss Meter And An EMF Meter?

EMF meters monitor AC electromagnetic fields (EMFs), typically formed from artificial sources such as electrical wiring. In contrast, gauss meters measure Direct Current areas, which naturally exist in the Earth’s geomagnetic fields and are generated from other sources where DC is present.

What is a Gauss Reading?

Gauss reading refers to a reading used in applications where the field strength is the primary parameter, such as a sensor.

What is a High Gauss Reading?

Gauss is the unit of measurement for the volume of magnetic field lines generated per square centimeter by a magnet. When the value is larger, additional magnetism lines are delivered via the magnet, and a high gauss measurement is obtained.

What Does a Gauss Meter Detect?

What Is the Difference Between a Gaussmeter,  Magnetometer, and Teslameter?

What is a Gaussmeter?

A gaussmeter, like a magnetometer, calculates the intensity or strength of a magnetic field and determines its direction, albeit for a small and constrained field. This instrument, also known as the modern form or type of magnetometer, comprises three main components. The Hall probe or gauss sensor, the meter, and a connecting cable that connects the other two components are all included.

A gaussmeter, like a magnetometer, operates on the Hall Effect principle or foundation. It can detect and discover dynamic or moving electromagnetic fields associated with alternating current (AC). It can also do so in the case of direct current’s continuous and steady permanent magnetic fields (DC). Its measured value is represented in four units. microTesla (T),  MilliTesla (mT), milliGauss, and Gauss (G) are some of the terms used.

What is a Magnetometer?

A magnetometer is a  measuring device that estimates a magnetic field’s value in a specific area. The electrical instrument can also calculate the magnitude of the magnetic dipole moment of various magnetic substances, materials, and constituents, including ferromagnets.

A magnetometer assesses and evaluates the effect of the magnetic dipole moment on the magnitude of needed parameters of a magnetic field. It affects the generated or applied current that flows through a current-carrying conductor.

Magnetometers come in various shapes and sizes, with different functions and characteristics. They can use them to figure out other aspects or features of a magnetic field. They may assess relative change, field direction, and strength.

A Gaussmeter is a device that measures magnetic fields that are contained in a small area and do not exceed a specific size limit; On the other hand, the need to determine the intensity of a substantial magnetic field does not go away. In these cases, a tesla meter is employed to calculate the value.

A tesla meter can detect the strength and direction of magnetic fields caused by direct current, pulses, and alternating current. MicroTeslaolk (T),  MilliTesla(mT), and Tesla are some units used to express their determined magnitude.

A gaussmeter, a tesla meter, and a magnetometer are similar in function and use, yet they have important differences. The discrepancies have a significant impact on their extent and applicability. It also affects the way the three electrical devices can be employed. Overall, the aid of the distinction in determining their advantages and disadvantages.

The initial distinction between a gaussmeter, a tesla meter, and a magnetometer is the units in which their measurement values are expressed. The strength of a magnetic field, for example, is measured in Tesla in the standard (SI) system. It switches to the gauss unit in the CGS system, where 10,000 gauss equals one Tesla.

microTesla (T),  milliGauss (mG), MilliTesla (mT), Tesla, and Gauss (G),  are the other larger and smaller units of computing (T).

The magnetic field’s size, which may be determined, is also crucial. Teslameters can compute the strength of a large field, while Gaussmeters can calculate the intensity of a small field.

In addition, the electrical instrument’s sensitivity is a point of distinction. In this scenario, we can state that a magnetometer is used in high-sensitivity applications. The magnetic field intensity of less than one mT (milliTesla) is measured here. On the other hand, a gaussmeter is a powerful device capable of estimating values more significant than one milliTesla (mT).

What is meant by a Magnetic Field?

A magnetic field is a dynamic vector quantity. It specifies or depicts the effects of magnetism on magnetic materials in motion, electric charges, and electric current. A certain quantity or value of force is applied to the shifting elements. It is perpendicular to the magnetic field and current velocity that must be measured.

The produced magnetic field attracts or repels ferromagnetic material in the case of a permanent magnet. It affects iron-based materials, for instance. Other magnetic substances are either repelled or drawn in by it. A few variables influence the strength of attraction and repulsion.

Non-magnetic materials can also feel the force’s effects. It occurs when a magnetic field’s magnitude changes due to a shift or change in location. The electrons moving in the outer atom are subjected to and affected by this impact.

Magnetized materials come in various shapes and sizes, and they are all surrounded by a magnetic field. Electromagnets, for example, produce or manufacture it by moving electric current. It could also be caused by erratic and dynamic electric fields that alter over time. The value of the magnetic field’s intensity or strength and its direction varies as the electric charges move to different locations at different times. It is shown and discussed via a mathematical function due to its chaotic and unexpected character. By assigning a vector value to each point in space, it is possible. A vector field is another name for it.

What is Hall Effect?

The voltage difference formed across a specific electrical conducting medium is called the Hall Effect. The resulting asymmetry is perpendicular to the electric current flowing through the conductor. It can also operate in the presence of a perpendicularly applied magnetic field in the studied component or material. The occurrence of the Hall Effect was initially discovered by Edwin Hall, a scholar, in 1879.

The impacts of the Hall Effect are only seen in a perpendicular magnetic field. Voltage contacts on the border or edge of a metallic plate or semiconductor are used to apply it. The observable results indicate a discernible sign reversal or change. The variation depends solely on the current generated or applied from within the vacuum of the conducting material.

This article aims to provide an overview of a Gauss meter and how it interacts with applications. This is a piece of scientific measuring equipment that is used to measure a magnetic field or flux density in gauss or G (metric units) or tesla or T (metric units) (the IS unit or international system unit).