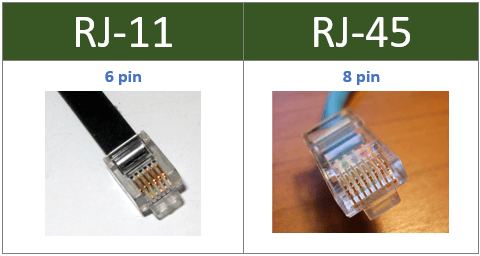 Connectors have been used for decades. They play an integral role when it comes to matters about network communication. There are different types of connectors in the market. You can buy an RJ11 connector or go for the RJ45 connector. RJ stands for registered jack. In this guide, we are going to discuss the differences between these two types of connectors.

What is RJ11 connector?

What is an RJ45 connector?

RJ45 connector is an 8-wire connector, which includes two spare wires. It is used for Ethernet connections and phone line connections. RJ 45 connector can be used on both ends of the cable; however the most common use is on laptops computers where the plug goes to the wall outlet. The other end is plugged into the network card. The RJ45 connector has eight wires because it can support four pairs of wires.

What are the similarities between RJ11 and RJ45 connectors?

RJ11 and RJ45 connectors both serve different purposes. While one is used for analog phone connections, another is used for data communications. However, there are some similarities between the two. Both connectors use an RJ standard and they both have a modular design. This means that they can be plugged into a connector block. The connectors are also color-coded so that it is easy to identify the wiring scheme.

What are the differences between RJ11 and RJ45 connectors 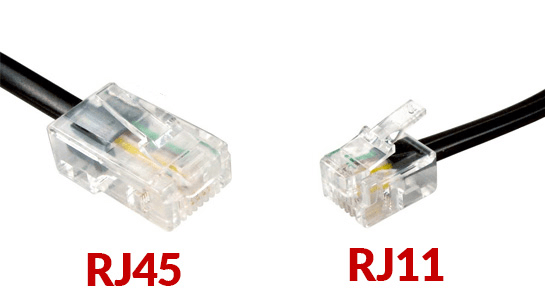 RJ11 connector has six pins, while RJ45 has eight wires. This means that RJ45 can support four pairs of wires, which makes it ideal for Ethernet connections.

Both connectors have a modular design. This means that they can be plugged into a connector block and then attached to the other end of the cable.

RJ11 is more commonly used for analog phone lines, while RJ45 connector is used for data communications and Ethernet connections.

RJ11 connector has a bandwidth of up to 600 kilobits per second, while the RJ45 connector can support speeds that are faster than 100 megabytes per second

RJ11 cables are typically thicker than RJ45 cables. This is because the RJ11 connector has two spare wires, which RJ45 does not have. Also, the RJ45 can be connected with cat5 and cat6 cables.

RJ11 wiring requires 4 and 2 to be connected together, while RJ45 wiring is straightforward.

RJ45 can be used with Ethernet switches, while RJ11 connectors are typically used in telephone cables that are connected to a router.

RJ11 connector is widely used in countries that follow the North American Standard telephone wire protocol. RJ45 connectors are used on both ends of the cable, where one end goes to a wall outlet and the other end goes to a networking card on a laptop computer. 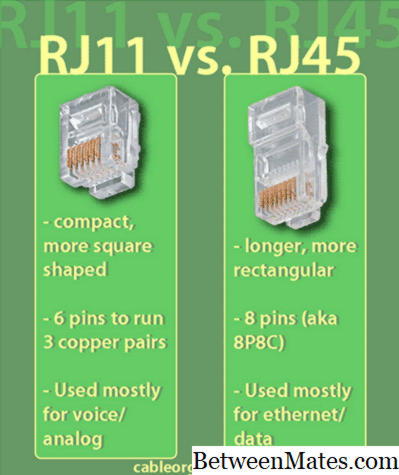 What devices use RJ11?

RJ11 connectors are used in a variety of devices, including fax machines, modems, and phone lines. They are also used in alarm systems and doorbells.

What devices use RJ45?

RJ45 connectors are primarily used for Ethernet connections. However, they can also be used for phone line connections. They are popular on the USB ports found on laptops.

Are RJ11 and Ethernet the same?

From the appearance, you can easily assume that RJ11 is the same as an ethernet cable. In reality, these two are very different. RJ11 connector is for sending telephone signals, while ethernet cable is widely used at homes and in offices.

This is another common misconception about these two connectors. RJ11 has six pins, which are usually wired to 4 and 2; however, it only uses four pairs of wires. Cat5 uses eight wires and each of these eight wires can have a separate signal to send. This means that the RJ11 connector is not the same as a cat5 cable.

What devices use a cat5 cable?

No. Don’t plug an RJ11 plug into an RJ45 socket. It might fit, but the tip and the first ring are not connected together.

RJ45 can be safely plugged into RJ11 because all eight wires have a corresponding connection to the pins on the RJ45 connector.

Can RJ11 be used with a DSL cable?

DSL cables are mainly used for data, voice, and video transmission. RJ11 connector is not the best option for this type of transmission. RJ45 connector is recommended because it has increased bandwidth and can support speeds that are faster than 100 megabytes per second.

What is the maximum distance that an RJ11 cable can be?

The maximum distance that an RJ11 cable can be is 100 meters. This is due to the limited bandwidth that is available with RJ11. If you need to extend the distance, you can use a repeater or a switch.

What is the maximum distance that an RJ45 cable can be?

Factors to consider when buying RJ11 and RJ45 connectors

There are many factors that you need to consider when buying RJ11 and RJ45 connectors. Let’s look at some of them.

The type of devices that you need to connect

Which devices do you intend to use with the connector? If you want to use an RJ45 connector with a computer, make sure that the device has an RJ45 port. The same is true for RJ11 connectors.

The distance between the devices

This is an important factor to consider if you are using a long cable. You will need to use a cat5 or higher cable if you are going to be using a cable that is longer than 100 meters.

The speed of the devices

Some devices transfer data faster than others. You will need to make sure that the connector you choose can support the speed of the devices.

The quality of the cables

Not all cables are created equal. Make sure you purchase cables that are high quality. Some cables can work for a limited time, while others will last longer.

The type of the connector

Make sure you choose a connector that is compatible with your device and one that meets your needs.

The price of the connector

Price will always matter. Choose a connector that is affordable and meets your needs. However, do not be quick to go for the cheapest RJ11 or RJ45 connector. The low price could be due to compromised quality standards.

FAQ about RJ11 vs RJ45 connectors

Here are the most common questions and answers about these connector types:

Q: Can I use an RJ11 connector to connect a VoIP system?

A: No, you will need to use RJ45 connectors. The same is true about other types of devices that require data transmission.

Q: Is it okay for me to plug my ethernet cable into the phone jack?

A: This can be done, but it is not recommended. The RJ11 connector does not have the bandwidth to support data transmission.

A: Yes, you can use an RJ45 connector with most televisions. However, you will need to check the connector type that is required by your TV.

A: No, you will need to use RJ11 cables that are specifically made for voice transmission. Don’t try to connect your VoIP system using a cat5e or any other type of cable that is not meant for voice.

Q: Can I use an RJ45 connector with a fax machine?

A: Yes, most fax machines will need to be connected using an RJ11 connector. However, you can get away with using an RJ45 if your machine is compatible. If the device needs to support speeds of 100 megabytes per second or more, then you will need to use an RJ45 connector.

Q: Do you need to purchase a special tool when installing RJ11 and RJ45 connectors?

A: No, since these are insulation displacement connectors, they do not require any special tools for installation. You can simply insert them into the port.

Q: Which cable type is better for telephone connections?

A: It depends on the type of telephone. If you are using a VoIP system, then an RJ45 cable is recommended. However, if you are installing a traditional phone line, then use an RJ11 cable.

Q: Which connector type will work with my USB modem?

A: You will need to use an RJ45 connector with a USB modem. Make sure to get the right type of cable so that your connection is not compromised.

Q: Will I need a separate RJ45 connector for each device?

Q: How do I know if my device requires an RJ45 or RJ11 connector?

A: You will need to check the documentation that came with your device. Most manufacturers include this information in the user manual. If you can’t find the answer there, then you can always contact the manufacturer for more details.

Q: Will an RJ11 connector work with a VoIP system?

A: No, you will need to use an RJ45 cable. The same is true for other types of data transmission devices.

Q: Will a cat 5e cable work with an RJ11 connector?

A: No, it is recommended that you use cables that were specifically designed for voice transmission. Do not try to connect your VoIP system with a cat 5e or any other type of cable that is not meant for voice.

A: Yes, you can use an RJ45 connector with many televisions. However, make sure to check the connector type that is required by your TV.

Q: I am having trouble connecting my fax machine to the phone line. What could be the problem?

A: Yes, you can use an RJ11 cable with a USB modem as long as the device is compatible. Make sure that your cable does not exceed 100 meters. If the device needs to support speeds of 100 megabytes per second or more, you will need to use an RJ45 connector.

Which is better between RJ11 vs RJ45? 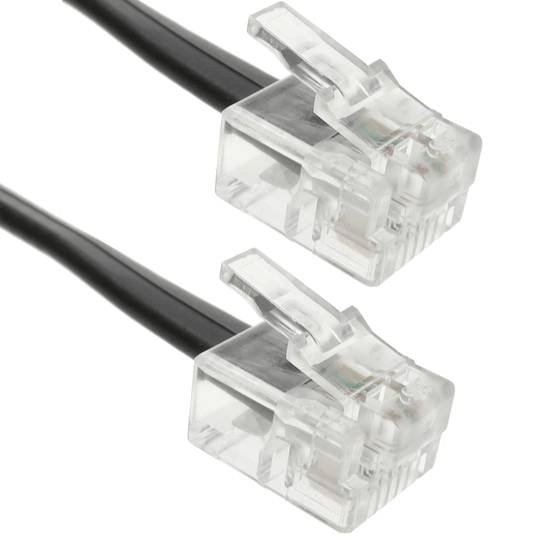 There is no simple answer to this question because it depends on the type of connection that you are trying to make. RJ11 is better for telephone connections, while RJ45 is better for Ethernet connections. In some cases, RJ11 can be used with Ethernet switches, but it is not recommended.

In conclusion, both connectors have their own specific uses. It is a matter of preference as to which one you would use.

At ICRFQ, we have proven to be a reliable supplier and sourcing agent of quality connectors. RJ11 connectors and RJ45 connectors are some of our most popular products. We carry a large selection of both types of connectors, and we can provide them to you at a competitive price.

We also have a wide range of cables that are compatible with both RJ11 and RJ45 connectors. If you have any questions or need help selecting the right connector, please feel free to contact us. We will be more than happy to assist you in any way possible.

ICRFQ connectors are available for purchase either as individual items or as part of a bulk order. You may place your wholesale orders online at ICRFQ.com, over the phone, or through fax.