Honeywell’s AWM5104VN is a linear voltage air flow sensor with a Venturi design. Because it is active-laser trimmed, this air flow sensor is adaptable to being swapped out with other models. Because of its remote installation options, using this device is a breeze. Continue reading to learn more about this device. 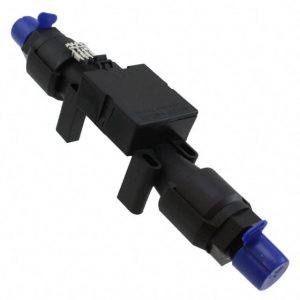 The AWM5104VN Microbridge Mass Airflow Sensor has a flow housing designed to function like a Venturi. The highest pressure drop that this airflow sensor can induce is 2.25 inches of water, while it is capable of measuring flow rates of up to 20 standard liters per minute (SLPM). Because the Microbridge chip is in close touch with the flow stream, the likelihood of an error occurring due to clogging in the orifice or bypass channel is drastically reduced. Amplification, linearization, temperature adjustment, and gas calibration are all handled by the circuitry contained within this sensor. It is feasible for all listings to have a linear output ranging from 1 to 5VDC, regardless of the flow range (20 SLPM) or calibration gas (nitrogen). Active lasers are used to achieve this calibration.

● AWM5104VN is used in various industries to achieve the right fuel to compressed air ratio, resulting in effective ignition and full flame.

● AWM5104VN is utilized as safety equipment in dangerous settings where individuals are subject to significant risks, such as mines and nuclear power plants.

● When utilized as a part of cars, AWM5104VN makes sure that the right amount of air enters the internal combustion engine.

● AWM5104VN is also used in ventilation setups to track the airflow through them.

The VAF (volume air flow) sensor, which keeps track of the airflow into the engine, is a spring-loaded air vane coupled to a variable resistor (potentiometer). The vane travels in relation to the airflow. By moving the vane directly, as in the K-Jetronic system, or by supplying a voltage to the potentiometer, which causes a voltage to appear on the output terminal of the potentiometer in accordance with the angle the vane spins, the amount of fuel injected can be adjusted.

A small air channel on the side of many VAF sensors can be opened or closed by an air-fuel adjustment screw. This screw leans or enriches the mixture of air and fuel by allowing a metered amount of air to pass through the flap. The mixture is enriched and leaned by twisting the screw in a clockwise or counterclockwise direction.

The vane moves due to the air flow’s drag force; it does not measure volume or mass directly. According to the drag equation, the drag force is influenced by the vane’s form, air velocity, and air density (which is influenced by air temperature). Some VAF sensors also have an intake air temperature sensor (IAT sensor), which enables the engine’s ECU to determine the air density and adjust the fuel supply as necessary.

Then, across the air stream, these sensors are positioned in the center. The wire cools down due to the moving air, which lowers its resistance. The wire’s decrease in resistance serves as a gauge for its flow rate.

The four hemispherical cups in this type of airflow meter are held by horizontal arms supported by a vertical shaft. At any given moment, at least one cup would be oriented in the direction air is blowing.

The resulting rotation of the device’s shaft is due to the force of the wind. The rate at which the wind blows across the shaft can be estimated by counting the number of times it rotates after a given time has passed.

These air velocity meters are typically used on aircraft. They can have an impact, cantilever, or static design. The Pitot tube of a Pitot-static type instrument will have two ports, one for the Pitot and one for the static. The Pitot port is typically installed with its spout pointing in the airflow direction.

Here, a Pitot port gauges the airflow’s dynamic pressure, while the static port, with its series of tiny holes along the tube’s side, provides a rough estimate of static pressure. One can calculate air velocity by comparing the two pressures.

If the airflow sensor is broken or tainted, it will provide inaccurate readings. The computer controlling the engine will incorrectly estimate the amount of fuel to inject as a result of this. Driveability issues such as no start, stalling, low power, and weak acceleration occur from a faulty mass air flow sensor. As an added note, a defective mass air flow sensor could activate the Check Engine or Service Engine Soon light. Even if the automatic gearbox is fine, a faulty air flow sensor could cause the transmission to shift unexpectedly.

The PCM logs a problem and stores the relevant issue code when the airflow sensor signal deviates from the intended range, triggering the illumination of the Check Engine light. With a diagnostic scanner, you can get this error number.

For the internal combustion engine in your car to run as efficiently as possible, you need the AWM5104VN. The AWM5104VN adjusts the balance of air and fuel based on its airflow measurement.

Or, to put it another way, your car wouldn’t run without AWM5104VN.

It’s for this reason that regular inspections and upkeep are essential. The good news is that air sensors don’t cost too much to replace. That’s why if you’re in the market for one, you should get in touch with us here at ICRFQ so we can ensure your engine receives the royal treatment.