The DS75176B is a high-speed differential TRI-STATE® bus/line transceiver designed to comply with EIA standard RS485 for multipoint data transfer. It has an expanded expected mode range from +12V to -7V. Furthermore, it is compatible with the RS-422 standard.

TRI-STATE capability is present on both the driver and receiver outputs, with the driver outputs having this capacity over the standard mode range of +12V to 7V. A thermal shutdown circuit is responsible for handling any bus contention or fault circumstances that create excessive power dissipation within the device. This circuit forces the driver outputs into the high-impedance state. DC characteristics are accurate from 0 to 70 °C and 4.75V to 5.25V. 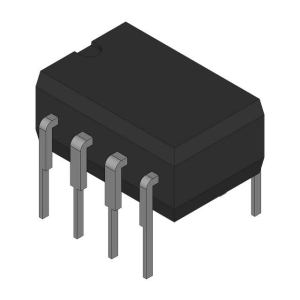 In radio communication, a transceiver is a piece of electronic equipment. A transceiver includes a radio transmitter and a radio receiver, as the name suggests. It has a radio wave antenna that it may use to transmit and receive radio waves to help in communication. To reduce the cost of the production process, these two related operations are typically combined into a single device. Other devices that send and receive data across a communications channel are also referred to by this word. These include bus transceivers, which send and receive digital data in systems that utilize computer data buses, as well as optical transceivers, which transmit and receive light in systems that use optical fiber.

Radio transceivers are extremely common components found in wireless devices. Two-way radios, audio transceivers used for person-to-person voice communication in both directions, are an actual application of this technology. Cordless phones, in which both the phone handset and the base station have transceivers to communicate both sides of the conversation, and land mobile radio systems such as walkie-talkies and CB radios are examples of land portable radio systems. Cell phones use radio waves to send and receive both sides of a phone conversation to and from a cell tower. Another significant application is wireless modems installed in mobile networked computing devices like tablets, laptops, and smartphones.

These modems transfer digital data to a wireless router and receive data from the router. Transponders are automatic microwave transceivers that are installed aboard aircraft. These transceivers respond to microwaves emitted by an air traffic control radar by sending a coded signal back to the radar, allowing the radar to identify the aircraft. The satellite transponders that are a part of communication satellites are the components responsible for receiving digital data for transmission from a satellite ground station and then relaying that data to another ground station.

What is a Bus Line Transceiver?

Bus Line In modern electronics, transceivers are frequently employed because they make it possible to transfer electrical signals along an electrical line, first from a transmitter, then through a channel connector, and finally into a receiver located at the opposite end of the line. It is frequently desirable to have the ability to use the same line to send a signal back to the device that was once functioning as the transmitter and have that signal be received and understood.

Transceivers make it feasible to accomplish just that; they permit a transmitter and a receiver to coexist simultaneously on an electrical line or connecting bus. This is made possible by the fact that transceivers make it possible. Traditionally, and in some situations even today, you would have a group of lines or a bus that is specialized for transferring signals down the line into a receiver. This was the case since you would only need to send one signal simultaneously. In addition, a separate bus or group of lines to receive information has been sent. Each bus or combination of lines only travels in one direction. It is possible to send and receive data in both directions using transceivers, which enable a bidirectional bus and can use just half the width of the bus if they implement a transceiver. This helps conserve routing space on a circuit board.

Today, most memory interfaces utilize transceivers, which are integrated into their respective systems.

What are Integrated circuit (IC) interfaces?

The flow of information between various types of electronic equipment is managed and controlled through integrated circuit interfaces, also referred to as IC interfaces.

The supply voltage, data rate, operational current, power dissipation, and temperature junction are all performance specifications associated with IC interfaces. There is a large variety of IC package types to choose from. The ball-grid array (BGA), the chip-scale package (CSP), the quad flat package (QFP), the small outline package (SOP), and the dual in-line package are some examples (DIP).

The Restriction of Hazardous Substances (RoHS) directive that came out of the European Union requires that IC interfaces intended for the European market comply with its requirements (EU). IC interfaces come equipped with a built-in charge pump or a joint test action group (JTAG) pin. Others offer defense against electrostatic discharge (ESD), extreme temperatures, and situations of excessive voltage.

Post any questions you may have about this article in the comment areas below. If you want to learn more, feel free to browse through the other fantastic content that we have on our website that is similar to this one.

If you require any information or wish to acquire DS75176B, ICRFQ is available to assist you. We are the leading distributor of electronic components in China, and we will guarantee that you receive the best products at the most affordable price.