The LM1036 is a stereo tone, volume, and balance circuit controlled by the direct current for use in car radios, televisions, and audio systems. By providing an additional control input, loudness compensation can be achieved straightforwardly.

In addition, a remote control system sends DC voltages to four control inputs, which then use those voltages to determine the functions of balance, treble, volume, and bass. You also can employ four potentiometers that are biased by a Zener-controlled supply provided on the circuit to achieve the same result.

Each tone response is defined by a singular capacitor chosen to deliver the desired characteristic.

Setting Up Your Amplifier The Old-Fashioned Way

Most current digital amplifiers provide volume control and lack separate controls for adjusting the amp’s bass, treble, or balance. You’ll need to use the TV’s or monitor’s interface and the remote to accomplish this. This is getting way too complicated! It’s helpful to swiftly adjust the bass and treble controls by hand when listening to records on a turntable. It would also be beneficial to have a volume filter that could be toggled on and off at will.

If your record player has a LINE or AUX output, this inexpensive Chinese kit will allow you to do just that. And it’s a great way to get started with electronics as a hobby. Because there are no surface-mount devices (SMDs) on the PCB, a novice can successfully solder the thru-hole components.

Why should we use the DC tone control circuit?

As opposed to a conventional tone control circuit, we know that a resistor can be used to boost the volume in a wide variety of audible frequency ranges.

Nonetheless, we will now apply active tone control, which employs DC voltage to regulate the amplification of each frequency band independently.

The potentiometer can be used the same way as before in this method. However, the result will be superior and cheaper. How? If you choose to continue reading, please do so.

How this DC-tone-control circuit works. A single IC-LM1036 will contain nearly all of them. Specifically, the circuit that regulates the tone is the one that gets made. Our circuit is both more compact and more efficient than others of its kind.

The Block diagram, IC leg functions, and LM1035/LM1036 pinout are shown below. 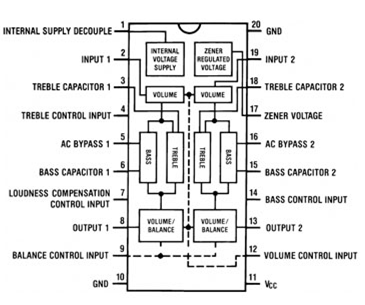 Interesting factors will be taken into account. Four control inputs allow DC voltages from a remote control system to adjust the bass, treble, balance, and volume. Selectable options via four individual knobs. It can be biased using the circuit’s Zener-regulated power supply. A single capacitor is selected to provide the desired characteristic for each tone response.

What is a Tone control circuit?

As a form of equalization, “tone control” can reduce or amplify the volume of individual tones or “frequency bands” in the audio input. If the bass from your speakers or headphones isn’t quite what you’re looking for, your listening space has a different tone than you’d like, or if you have a hearing problem, you can use tone controls to customize the sound from your audio system. A tone control circuit is used to adjust the signal before it is amplified and sent to speakers, headphones, or recording devices. Radios, MP3 players, boomboxes, PA systems, and instrument amplifiers are a few examples of audio equipment that feature tone controls.

Users can fine-tune the volume and tone to their satisfaction. As a bonus, it helps them compensate for weak recordings, impaired hearing, poor listening conditions, or malfunctioning playback devices. If you’re an older person with hearing loss, you might want to increase the volume on anything above a specific frequency range.

In their most fundamental form, tone control circuits reduce the volume of the signal’s high or low frequencies. Bass and treble “cut” describe this effect. Passive circuits using only resistors and capacitors or inductors are the simplest kind of tone control. A frequency-dependent attenuation or amplification of an alternating current signal is achieved by using capacitive and inductive reactance, respectively. It is possible for active tone controls to “boost” or increase the volume of a specific frequency range. Tone control circuits with more complexity can amplify or dampen the midrange frequencies.

The most basic form of tonal adjustment consists of a single knob that, when turned clockwise, boosts the high frequencies and, when turned counterclockwise, the low ones. From the 1930s through the 1970s, this was the most common form of tone control on radios and record players.

Complex circuits may also benefit from amplifiers. Modern analog units have done away with inductors due to their bulk and susceptibility to electromagnetic interference, opting to use operational amplifiers, resistors, and capacitors instead.

Analog electronics were used initially to achieve tone control, and this method is still widely used in the production of modern tone control circuits. Digital signal processing, however, is being used more and more to apply digital techniques.

Thanks for reading. If you thought this post was interesting, feel free to look around the rest of our website for other content similar to what you just read. If you have any questions about the content of this article or any other article that can be found on our website, please feel free to leave them in the comment box below, and we will try our best to respond to them.

Contact us at ICRFQ, your leading electronic distributor of electronic components in china, if you would like more information or wish to purchase the LM1036N. We will ensure that you receive the best product at the best price possible.