The LM317 is a positive linear voltage regulator IC that is used rather frequently. Bob Dobkin first conceived of the idea in 1976 while he was employed with National Semiconductor.

The inverse of the positively charged LM317, the LM337, is used to regulate lower voltages than a reference. It was designed by Bob Pease, who worked for National Semiconductor, and he was the one who came up with the idea. Let’s begin by defining the term “Linear Voltage Regulator” so that everyone is on the same page regarding the topic.

A linear regulator is a type of voltage regulator used in electronic devices. Because the regulator’s resistance varies with both the input voltage and the load, a constant voltage is produced. The regulating circuit’s resistance changes continuously and adjusts a voltage divider network to maintain a stable output voltage.

The difference between the input and output voltages is lost as heat. In contrast, a device that toggles on and off actively maintains the average output of a switching regulator (oscillates). The efficiency of a linear regulator is limited, and the input voltage must always be high enough to allow the active device to decrease voltage, as the regulated voltage must be lower than the input voltage.

The low efficiency of linear regulators is a significant problem for many applications. In a regulator, the transistor connecting the input and output terminals behaves like a variable series resistance, squandering a great deal of power when the input-to-output voltage differential and load current are both high. The current required by the regulator’s internal circuitry is included in dissipated energy to function (shown in the diagram as IGND).

Heat is likely to cause failure in a linear-regulator circuit more frequently than any other factor. The power dissipation of the regulator IC will cause the component’s temperature to rise. If insufficient heat sinks are present, the regulator’s temperature could increase to the point where it severely impairs performance or causes thermal shutdown. This critical problem is covered in the AAC’s journal article on thermal design for linear regulators.

Although linear regulators are less efficient than switching regulators, they continue to see widespread use for several reasons. The minimal output noise, low cost, and ease of usage are all significant benefits. Most linear regulators can function with only input and output capacitors as their only external components; furthermore, the design process is greatly simplified by the wide range of possible capacitance values. 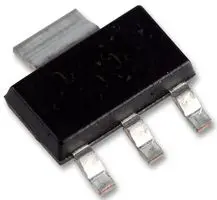 The LM317-N series of adjustable 3-pin positive voltage regulators can produce more than 1.5 A over a 1.25-V to 37-V output range and a broad temperature range. Additionally, it can regulate voltages between 1.25 V and 37 V. They are quite simple to put to use and simply call for the addition of two external resistors to adjust the output voltage. In addition, the line regulation and load control are superior to the typical fixed regulators’ performance.

In most cases, capacitors are unnecessary; however, an input bypass is required if the device is located more than 6 inches away from the input filter capacitors. An output capacitor is not needed to improve the transient response further but can be added if desired. It is feasible to attain very high ripple rejection ratios by avoiding the adjustment terminal. Those are challenging to create with conventional 3-terminal regulators because of their innate design restrictions.

The LM317-N can function as a precision current regulator if an external resistor is connected between the adjustment pin and the device’s output. One can create supplies with electronic shutdown by clamping the adjustment terminal to the ground. This also programs the output to 1.25 V, an area where most loads draw a small amount of current.

If you are here, it means that you have read the entire article; if that is the case, then we hope that this post has provided you with the answers to all of your concerns regarding the device stated earlier. There is more content on our website regarding electronic components that could be helpful to your projects; if you would like to look over it, you are more than welcome to do so. If you have any questions about this article or any other information on our website, please do not hesitate to ask them in the comment area below, and we will try our best to respond to them.

If you need any electronic component, ICRFQ is your one-stop shop for them. Just call us, and we’ll see you get the greatest service for the lowest feasible price.