Operational amplifiers from the OPA134 series provide extremely low levels of distortion and background noise and are designed specifically for audio applications. This article will introduce OPA2134PA for you, including topics such as equivalent, datasheet, circuit, pinout, and other related topics. But first, Let’s start at the beginning; what is an Op-amp?

What is an Op-amp?

When people talk about the quality of an op-amp, various technical phrases are frequently brought up, including Slew rate, Gain, Impedance and Voltage

The term “gain” refers to the ratio of a signal’s input level (typically lower) to the signal’s output level (typically higher). The term rate’ refers to the rate at which an operational amplifier may alter the voltage at its output. In a perfect op-amp, the output would change instantly, but in reality, this is not the case. The input impedance of a perfect operational amplifier would be endlessly high, whereas the output impedance would be virtually nonexistent (0). 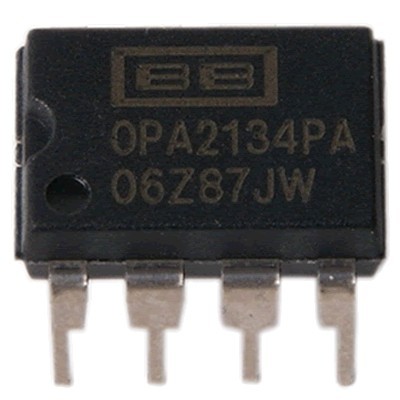 The OPA2134 series of operational amplifiers provide ultra-low distortion and low noise and are completely defined for use in audio applications. Excellent audio performance has been achieved by integrating a real FET input stage. This provides for superior sound quality as well as speed. This, in addition to the outstanding DC performance and high output drive capability, enables the product to be used in various demanding applications. The OPA2134 features a wide output swing within 1 V of the rails. This allows for increased headroom and makes the component perfect for usage in any audio circuit.

The OPA2134 SoundPlusTM audio operational amplifiers are straightforward to use and remove a possible source of a mistake by avoiding the overload and phase-inversion concerns common in FET-input op-amps.  They can function from power supplies ranging from 2.5 V to 18 V. By keeping the input bias current low over the entire input voltage range, cascode input circuitry contributes to low distortion.

This circuitry also provides excellent common-mode rejection. The operational amplifiers in the OPA2134 series are stable at unity gain and offer outstanding dynamic performance throughout various load circumstances, including high load capacitance. Even when overdriven or overloaded, the dual and quad versions contain independent circuitry, resulting in the lowest possible crosstalk and complete freedom from interaction.

The operational amplifiers in the OPA134 series are excellent for various audio and general-purpose applications due to their unity-gain stability and suitability. The dual version has completely independent circuitry, which ensures that the device will continue to function normally even if one of the amplifiers in the package is overdriven or short-circuited. To reduce the amount of noise produced by the power supply, ceramic capacitors with a value of 10 nF or higher should be used to bypass the power supply pins.

Audio, Communications and Networking, and Signal Processing are some examples of applications.

The OPAx134 series provides exceptional precision for dc applications and excellent AC performance. These devices have a supply voltage range of up to 36 volts and offer extremely low levels of distortion and noise, in addition to a bandwidth of 8 MHz and high capacitive load drive. As a result of these characteristics, the OPAx134 is an operational amplifier with a high performance suitable for high-voltage professional audio applications.

TI is an American technology firm with its headquarters in Dallas, Texas. The business creates and manufactures semiconductors and a range of integrated circuits, which it subsequently sells to producers and designers of electronic devices all around the world.  According to the total volume of its sales, it is consistently ranked as one of the top ten semiconductor businesses in the entire globe.

More than 80 percent of the company’s revenue comes from designing and producing analog chips and embedded processors, the company’s primary areas of concentration. Calculators, microcontrollers, and multi-core processors are some of the TI products that fall under the education technology category. TI is also responsible for the development of digital light processing technology.

The distortion created by the OPA134 series of operational amplifiers is lower than the measuring limit of every piece of commercially accessible technology that has ever been discovered. However, a specialized test circuit can potentially expand the measurements’ capabilities. Distortion caused by operational amplifiers can be seen as an example of an internal error source and might be called the input.

Before you replace them in your circuit, we ask that you examine their specifications and the configuration of their pins. Customers are, therefore, responsible for deciding whether or not components are suitable for the purposes they want to use them for.

The operational amplifier is a fundamental component found in audio equipment. Op amps are utilized in various contexts; thus, it should be no surprise that audio enthusiasts discuss them frequently. We have a lot of faith that the knowledge we have provided for you in this article will be helpful to you.

Contact ICRFQ for additional information or to purchase OPA2134PA. We are China’s leading distributor of electronic components.